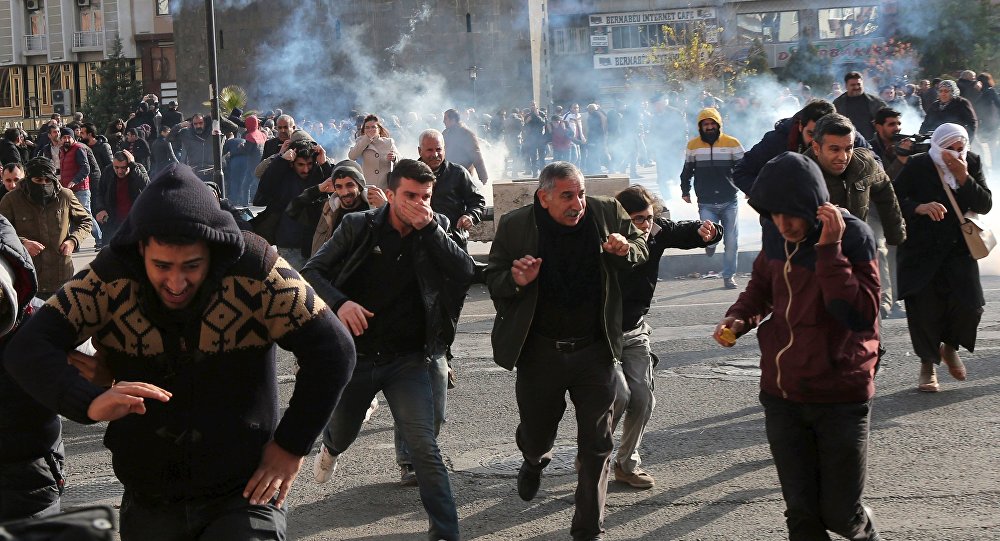 Some 100,000 People Flee Homes Amid Clashes Between Ankara, PKK

More than 100,000 people were displaced due to the Turkish forces' operations against the Kurdistan Workers Party (PKK), according to Turkey's Interior Ministry.

ANKARA (Sputnik) — Some 100,000 people have been displaced due to armed clashes between Turkish security forces and militants from the Kurdistan Workers Party (PKK) in the country's majority-Kurdish southeastern regions, Turkey's Interior Ministry said on Thursday.

Severe clashes between Ankara forces and PKK militants have been arising sporadically since a July terror attack in the city of Suruc, which killed over 30 people, most of them Kurds. As Kurds killed two Turkish policemen soon after the attack, Ankara launched a military campaign against PKK. The clashes intensified earlier this week in the southeastern city of Diyarbakir.

© AP Photo / Vadim Ghirda
200,000 Kurds Fleeing Turkey Amid Increased Violence – German Media
The Turkish forces' operations are being carried out in the southeastern districts of Diyarbakir, Silopi, Silvan, Sur and Cizre, where the PKK has a strong presence.

The authorities also declared a police curfew in area most affected by the armed clashes, with a population of 1.3 million civilians.

Over 100,000 of them have been forced to flee their homes due to the ongoing violence and domestic hardships, according to an Interior Ministry report that was cited by the Hurriyet newspaper.

According to the ministry, the security forces have taken control of eight of the 13 high-risk areas where the PKK militants were trying to establish autonomous areas, not controlled by the central government.

The Kurds, Turkey's largest ethnic minority, are striving to create their own independent state and gain independence from Turkey. The PKK was founded in the late 1970s to promote the self-determination for the Kurdish community. The PKK is designated as a terrorist group by Turkey.

The Kurdish struggle for independence gave rise to a conflict between Ankara and various Kurdish militant groups that has been ongoing since 1984.