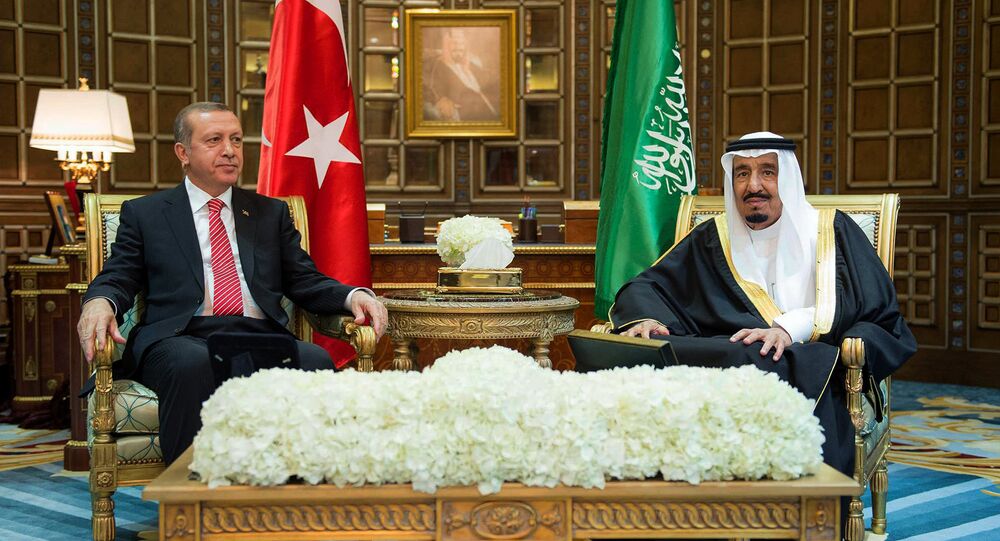 King Salman and Turkish President Erdogan are about to spark a new war for control over Middle Eastern oil but the plan, which was in fact devised by Washington, will ultimately backfire, F. William Engdahl asserted.

© AFP 2020 / TIMOTHY A. CLARY
Triumph of Soft Power: Russia Sets the Tone in Syria Peace Plan
Riyadh, assisted by Qatar and Turkey, is striving to bring oil fields and pipeline routes in Iraq and neighboring Syria "under direct Saudi control," the expert on oil politics noted.

"Unfortunately, as in all wars, there will be no winners," Engdahl wrote in an opinion piece for New Eastern Outlook. He also named the EU, the Iraqis, Syrians and Kurds as the main losers.

The historian named four key groupings, which will be involved in the upcoming conflict. Sunnis, including Saudi Arabia, Turkey, Daesh and the recently formed Saudi-led anti-terrorist coalition, make up the first group. The second one consists of Syria, Iran, Iraq and Hezbollah, with Russia also being a factor. The analyst named Israel as the third player.

Engdahl maintains that the fourth group, led by the United States, is "playing the most sly, deceptive role" at the moment.

"Washington is preparing a devastating trap that will catch the foolish Saudis and their Turkish and other Wahhabi allies in a devastating defeat in Syria and Iraq that will no doubt then be proclaimed as a 'victory over terrorism' and a 'victory for the Syrian people,'" the historian assumed.

Daesh, according to Engdahl, is instrumental to the Saudi plan. The oil kingdom wants the group to perform "ethnic cleansing of the legitimate Syrian populations" living in oil-rich regions so that it would then be able to transport fuel from Qatar and Saudi Arabia to Turkey through Syria.

© REUTERS / Khalil Ashawi
Mounting Evidence: Ankara Involved in Dirty Dealings With Daesh
"Erdogan's Turkish military and most especially his Turkish intelligence, MIT, headed by close crony, Hakan Fidan, is playing a key role in the planned Saudi-Turk-Qatari coalition's move to destroy the regime of Assad and at the same time seize control for them of the rich oil fields of Iraq between Mosul and Kirkuk," the historian explained.

Although many see the recently-adopted UN Security Council resolution on Syria as an achievement that will help to bring lasting peace to Syria, Engdahl views the document as a "a near-perfect deceptive maneuver" designed by Washington to "set the stage for the imminent Saudi-Turk oil wars and subsequent debacle in Syria and Iraq."

© AFP 2020 / AMC / FADI AL-HALABI
Fighters from Al-Qaeda's Syrian affiliate Al-Nusra Front drive in the northern Syrian city of Aleppo. (File)
© REUTERS / Alaa Al-Faqir
Oops! Why Defeating Daesh in Syria is Not Enough?
The agreement paves the way for a ceasefire, which is expected to be followed by the UN-supervised free and fair presidential election.

"That ceasefire excludes Saudi and Turkey-backed Daesh, and the al-Qaeda affiliate, al-Nusra Front. At the same time, it calls for an immediate, simultaneous start of a 'political transition' which means completely contradictory things for the United States, Germany, France and the UK as it does for Syria, Iran, and Russia," Engdahl warned.

The expert maintains that Russia, Damascus-led forces, Hezbollah and Iran will abide by the resolution, while Daesh and the like will "have free reign to grab the oil riches" in Iraq and Syria. "At that point, the trap will have been set and Washington will no doubt spring it, with Russia, Iran and Assad … able to do little to prevent it," he observed.

UNSC Resolution on Syria Proves That 'Putin Was Right' All Along