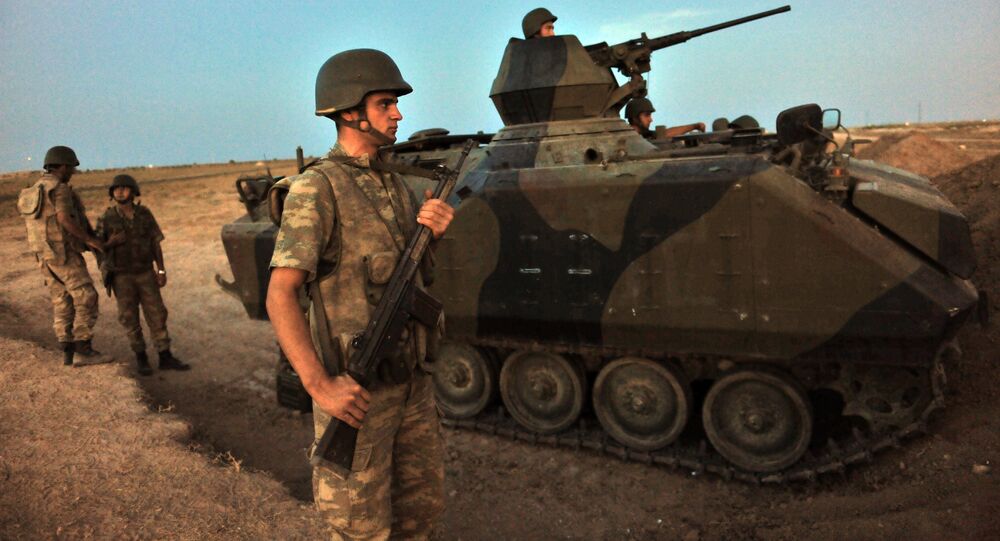 Ankara Wants to Become a 'Military Force to Be Reckoned With'

Ankara's recent military adventures, involving the so-called "invasion of Iraq" and the crackdown on the Kurds, point to the fact that the Turkish leadership is increasingly more aggressive both at home and abroad, independent scholar Dr. Can Erimtan wrote for New Eastern Outlook.

Turkey has traditionally been reluctant to be directly involved in military confrontations, the expert noted. This state of affairs appears to have changed since President Erdogan and Prime Minister Davutoglu "now seem willing to employ any means possible to become a leading component of a new Middle East," he assumed.

Ankara's new goal, according to Erimtan, entails turning the country into "a military force to be reckoned with." As part of this initiative, Turkey "spent a whopping [$1 billion] on importing weapons from US manufacturers last year," he added, citing data released by SIPRI.

In addition, Ankara was embroiled in a major scandal after sending approximately 130 soldiers to northern Iraq to assist and train Peshmerga. The mission was not authorized by Baghdad, which urged Turkey to withdraw its forces as soon as possible and refrain from similar actions in the future.

Ankara also established a military base in Qatar, which will be home to 3,000 troops, in what is Turkey's first large-scale military mission overseas.

"Turkey seems willing to enter actively into the hornets' nest that is the intra-Islamic Cold War" between the Sunnis and the Shia, the expert noted.
Ankara's growing assertiveness, according to Erimtan, is evident at home, as well as abroad.

Turkey "seems serious about flexing its military muscle in its near abroad. On the domestic front Ankara seems equally bellicose, leading some to argue that Turkey is now on the verge of a civil war," the expert noted, referring to Ankara's active campaign to tackle the Kurdistan Workers' Party (PKK) after the ceasefire with the Kurds broke down in July.

Erdogan Makes Neighbor Iran an Enemy With Its New Qatar Base