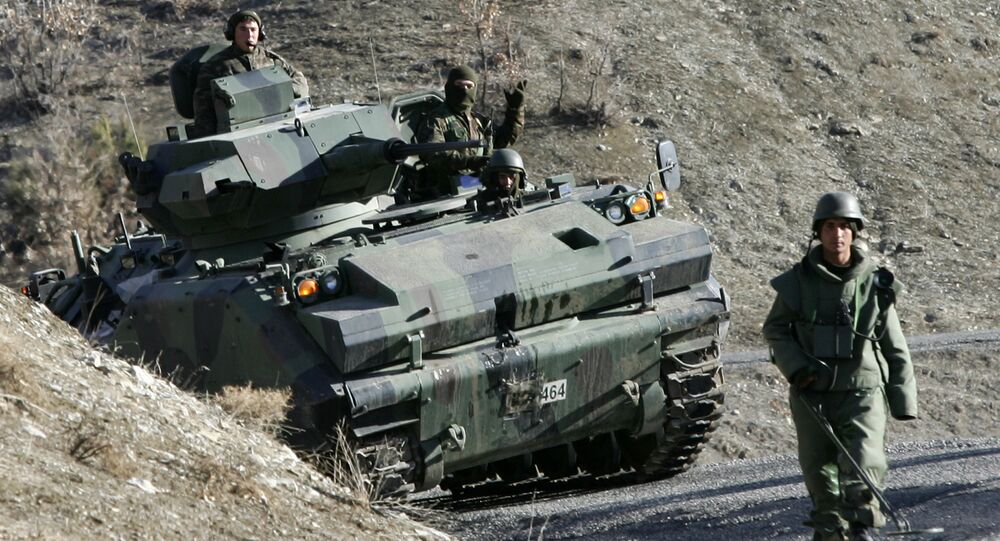 Turkey's invasion into northern Iraq could well be part of a plan to split Iraq into three separate states, undertaken with the approval of the US, while the recent Daesh attack on the Turkish troops plays right into the hands of Ankara, according to Russian political analyst and Middle East expert Semyon Bagdasarov.

The rocket attack at a base in northern Iraq where Turkish troops are currently stationed was solely to the benefit of the Turkish leadership, Semyon Bagdasarov, who is also the Director of the Center for the Middle East and Central Asian Studies, told Radio Sputnik.

© AP Photo / Sasa Kralj
Friends With Benefits: What's Behind Turkey's Odd Alliance With Iraqi Kurds
On Wednesday, Daesh militants fired rockets at a base in northern Iraq, as they launched a wave of attacks against Kurdish forces.

The Turkish Armed Forces said its soldiers returned fire, with four of them sustaining minor injuries.

The expert says that it could well have been a planned act by Ankara.

“In fact, it is all about [the city of] Mosul — who takes Mosul and kicks Daesh out. The Turks want control over it. Well, in the worst case, jointly with Iraqi Kurdish Peshmerga forces. To be more exact, with the Iraqi Kurdistan Democratic Party, led and controlled by Masoud Barzani, with whom the Turks, altogether, have a good relationship."

"So, incredible as it may seem, this strike plays into the hands of the Turkish leaders, who will now justify the country's presence there and the increase of its military contingent,” said Bagdasarov.

© AFP 2021 / BULENT KILIC
Is the Turkish Invasion of Iraq Nothing More Than a New Oil Play?
His words have already been supported by the statement of the Turkish foreign ministry that Wednesday's fighting demonstrated it had been right to send additional forces to protect its personnel.

"This attack showed how legitimate our concerns were about the security of Bashiqa camp," it said.

Bagdasarov therefore said that it was, in fact, “an occupation of a territory of a different state” which Iraq is unable to withstand.

“In this case there could be only one appropriate countermeasure  — military. However the fact is that there is almost no Iraqi army present in this region, it is mostly the Turks and Iraqi Kurdish Peshmerga. And the reality is that Iraq is unable to resist the Turkish aggression. The Iraqi army is very weak on the ground. But the conflict is ripening and it is only the matter of time when there will be a clash between the Iraqis and the Turks.”

It is impossible that the Turkish military invasion of Iraq could have occurred without US approval.

© Sputnik / Mikhail Voskresenskiy
Washington Looking for Volunteer Armies to Hit the Ground in Syria - German Media
“I think that the decision to bring the Turkish military into the Iraqi territory has been agreed upon with the US. And America's current inaction speaks volumes. Then right after it there emerged information that US, Turkey and Iraqi Kurdistan decided to meet first in Ankara and then in Erbil to discuss the future of Iraq. Without Baghdad, without the central government. And it is easy to figure out what future for Iraq they foresee.”

“And several months ago one of America's generals announced in a soldierly way that a unified Iraq ceased to exist. So we should regard three separate states: Iraqi Kurdistan, Shia state in Baghdad and Sunni Mosul."

"So I think it is all about the implementation of this very project with the help of Turkey, moreover that it is now a member of the Saudi-led coalition on the fight against terrorism. All the above is going to be implemented on the Iraqi territory and, I am afraid, on the Syrian as well.”

The expert explained that the coalition proclaims its aim as the fight against Daesh. It is forming a special forces out of the servicemen of its member states. The second aim is the so-called protection of civilians.

"Such a wording often conceals the desire to topple President Assad, accusing him of alleged fight against peaceful civilians,” he said.

The third aim is the ideological counter-strategy against Daesh.

"The Turks will carry it out from the Iraqi territory they will seize under their control. And I think, most likely from part of the Syrian territory."

"There, many understand that the new borders are being shaped out. And it is very important who will own what. Thus we are witnessing some stepping-up with everyone claiming that they are fighting against Daesh.”