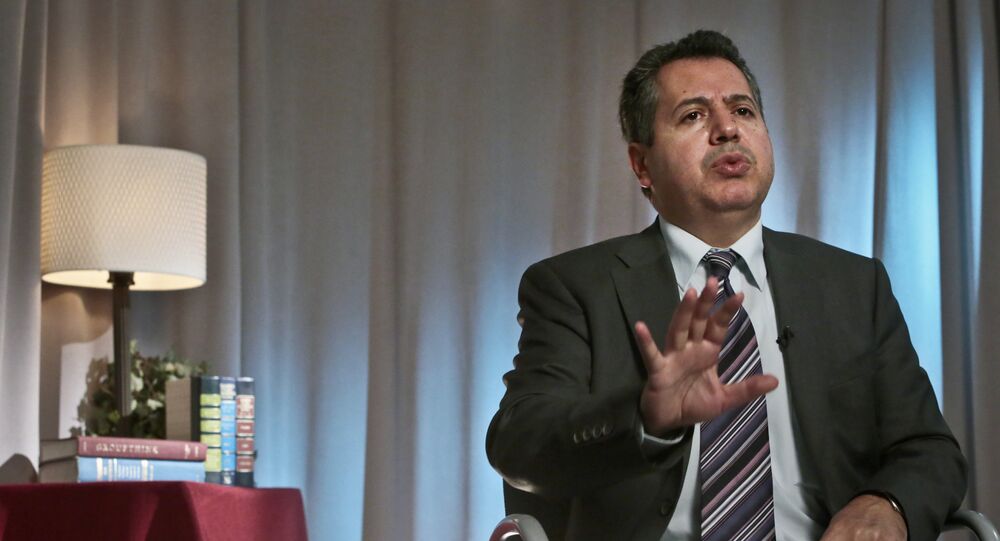 Special Representative to the United States for the National Coalition of Syrian Revolution and Opposition Forces said that Syrian opposition will have to hold talks with President Bashar Assad on the implementation of a transitional period in the country.

© AP Photo / Pablo Martinez Monsivais
UNSC Resolution on Syria Illustrates 'Progress' - Jordan Foreign Minister
MOSCOW (Sputnik) – The Syrian opposition will have to hold talks with President Bashar Assad on the implementation of a transitional period in the country, Najib Ghadbian, the Special Representative to the United States for the National Coalition of Syrian Revolution and Opposition Forces told Sputnik.

“We believe during the [negotiations of] transition, we have to talk to the other side. And Assad is going to be there,” Ghadbian said.

According to Ghadbian, for the opposition, Assad is “not acceptable in the transition in the future.”

“We have to negotiate with him and we know we have to do that,” he added.

The talks between the Syrian government and opposition representatives are unlikely to happen before the deadline set for January, Najib Ghadbian said.

“I think that deadline or timetable is too ambitious to expect the two sides to negotiate by January 1, but we welcome, as I said, any political process that would put an end to the killing and put the country on a path of transition based on the Geneva communique,” Ghadbian said.

The January deadline for negotiations under UN auspices was set by the International Syria Support Group in Vienna last month, upholding the 2012 Geneva Communique.

The special representative to the United States for the National Coalition of Syrian Revolution and Opposition Forces told Sputnik that Moscow had not been in touch with the coalition.

Moscow maintains it is working with Syrian opposition forces in order to facilitate the settlement of the crisis in the war-torn country. On December 3, Russian Foreign Minister Sergei Lavrov said all Syrian opposition groups needed to be involved in talks with Damascus on reconciliation in the Vienna talks format.

"We are the mainstream opposition. We have not been contacted by Moscow," Najib Ghadbian said.

He said he did not know what opposition forces Moscow said it was in touch with on the issue of the Syrian crisis resolution.

"I don’t really know what kind of opposition they are talking about. I am not aware of them," Ghadbian said.

The special representative to the United States for the National Coalition of Syrian Revolution and Opposition Forces said that the Daesh, also known as ISIL/The Islamic State extremist group and the Nusra Front are enough for the list of terror groups in Syria necessary to continue with the settling of the crisis in the country.

"ISIS [IS] is the enemy that we all agree on including Russia, Iran, and everybody. Let’s isolate that group. And then there’s Al Nusrah, which is a designate. I don’t think we need to widen that," Najib Ghadbian said.

He added he did not see much use in expanding the list of terror organizations operating in the war-torn country.

"I think again we have, the UN has a list, it’s called ISIS and Al Nusrah. Let’s focus on that. Let’s not widen that," Ghadbian said.

Syria has been mired in civil war since 2011, with forces loyal to Assad fighting against numerous opposition factions and extremist groups.

International talks on the settlement of the Syrian crisis started in October. A second round of talks in the so-called Vienna format took place in November. On Friday, the UN Security Council unanimously adopted a resolution outlining a peace process for Syria following talks between 18 ministers of the International Syria Support Group (ISSG).

The West and several countries in the Middle East do not consider Assad to be the legitimate authority in Syria. The United States has also been supporting the so-called "moderate" Syrian opposition which is fighting against government forces.

Kerry: All Stakeholders in Syria Group Committed to Timeline for Transition