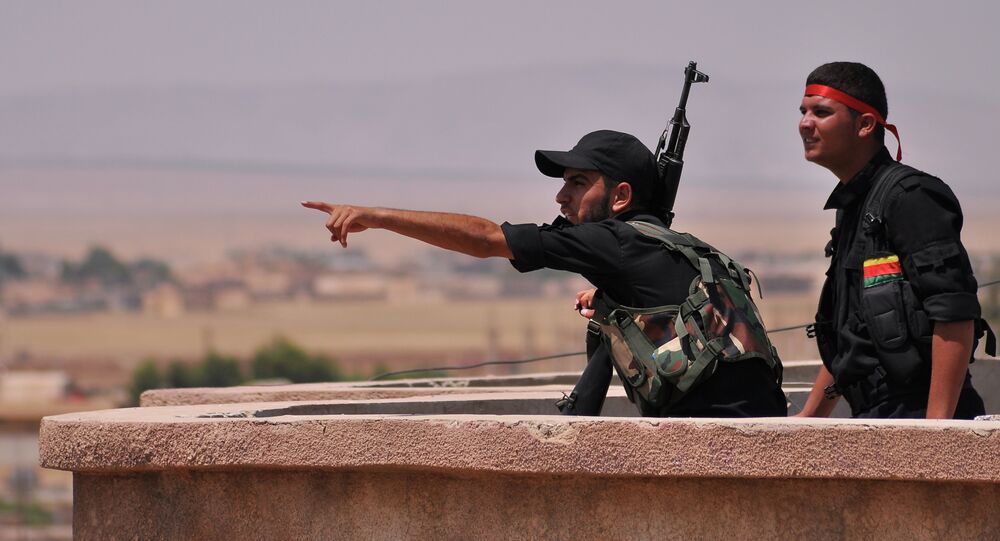 Asked to comment on the situation on the ground in the Syrian Kurd-controlled areas of northern Syria, YPG People's Protection Units commander Huseyin Kocer told Sputnik that while Russian airstrikes have been dealing a "a very serious blow" to Daesh (ISIL), the Turkish military has been attacking Kurdish areas instead.

Speaking to Sputnik Kurdistan on Friday, Kocer explained that "Turkey's attacks began after YPG forces managed to liberate Tel Abyad," a town in northern Syria located about 2 kilometers from the Turkish border.

"They are trying to provoke us by their attacks. Before the area was liberated, Turkey traded with Daesh through the border crossing point at Tel Abyad. But after the jihadists were kicked out of there, Turkey's cards got all mixed up, and they began provoking us in every possible way."

© AFP 2021 / DELIL SOULEIMAN
Syrian Kurds Say Turkey's 'Moderate Rebels' are Trying to Annihilate Them
Kocer emphasized that for their part, "the representatives of the YPG consider Turkey as our neighbor, and do not want war. We are convinced that war will not bring anything good to anyone. We want to maintain good relations with neighboring countries."

Asked to comment on Ankara's allegations that Kurdish self-defense groups have harassed Turkmen and the local Arab population living in the area, Kocer responded by noting that "in this situation, Turkey is not acting as a defender of the Arabs. Its goal is to sow discord in the region – to sow disunity among the ethnic groups living on the territory of Syria."

"In Tel Abyad," the commander added, "there has not been and will not be any discrimination against Kurds, Turkmen or Arabs. We are against any oppression and discrimination. The Arab population in the region joins the ranks of the Democratic Forces of Syria, [an alliance of Kurdish, Arab, Assyrian, Armenian and Turkmen militias seeking to expel Daesh from Syrian territory], and participates in city government. The co-chairman of the Tel Abyad's City Council is an Arab. Arabs hold high management positions in many local organizations."

"The YPG brigades are a force stepping out in defense of the entire population, not just one nation. They are composed not only of Kurds, but include Arabs and the other peoples that inhabit the region. We are fighting for the creation of a democratic Syrian state."

© AP Photo / Misha Japaridze
Run for the Hills: ISIL Fighters Fleeing Stronghold of Raqqa Amid Russian Air Campaign
Asked to comment on the Russian campaign of airstrikes against jihadist positions in Syria, Kocer emphasized that "thanks to Russia's actions, Daesh and the other terrorist organizations which seek to destroy Syria have been dealt a very serious blow, and they continue to bear heavy losses."

Meanwhile, Turkey, according to the commander, is providing the terrorists with tremendous support. "Daesh jihadists freely cross the border into Syria from Iraq and from Turkish territory. During clashes with the terrorists, we have repeatedly taken prisoners turning out to be Turkish citizens. Turkey is providing Daesh with large-scale support. It is in Turkey that the jihadists undergo training, and get treatment after they've been injured. A large number of Daesh's new recruits are from Turkey. Erdogan's government supports Daesh with money, weapons, and intelligence."

"The majority of our clashes with Daesh occur on the Turkish border. Until our liberation of the city of Ras al-Ayn [in Syria's northeastern province of Hasakah], the jihadists there had received serious support from Turkey. After we managed to take control of the city, the route supporting the terrorists was effectively blocked. The same thing happened in Tel Abyad. Daesh oil had been going to Turkey through Tel Ayab, Azaz and other areas. In Tel Abyad, we have found a number of oil storage facilities and shelters, leading to Turkey. These facts are evident."