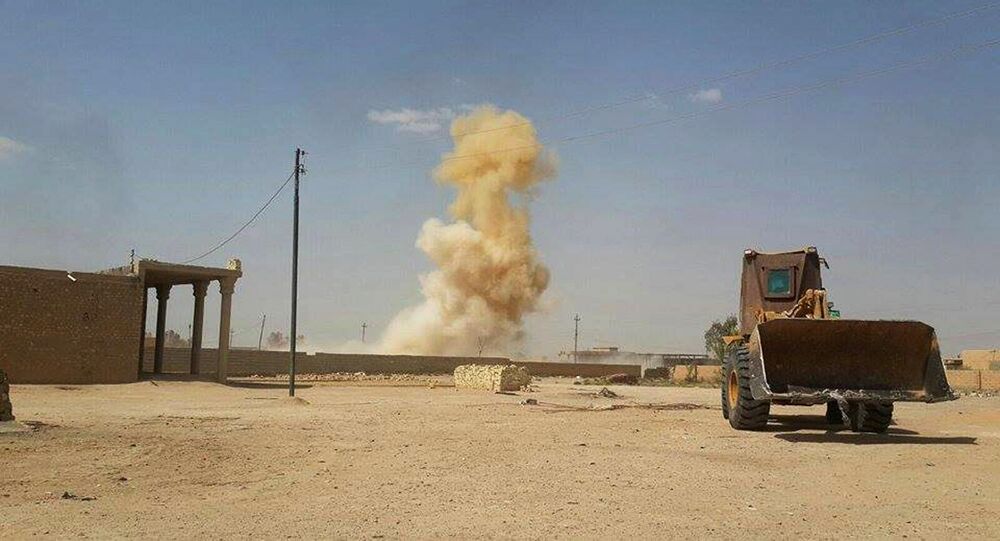 Over 30 Iraqi Soldiers Killed in US Air Force Strike, 20 Others Injured

At least 30 Iraqi soldiers were killed and 20 others injured in US air strike, Hakim al-Zamili, the head of Iraqi parliament's Security and Defense Committee said.

"Thirty soldiers from the Iraqi Army's 55 brigade were killed and 20 were injured in a US airstrike on the town of al-Naimiya in the al-Fallujah province," al-Zamili's statement obtained by Sputnik reads.

© AP Photo / U.S. Air Force via AP
US-Led Coalition Against Daesh Launches 18 Airstrikes in Syria, Iraq
The politician stated that he demanded "the [Iraqi] prime minister to conduct an investigation into the airstrike against the 55 brigade, which had previously had huge success in the fight against Daesh terrorists."

Daesh (ISIL, ISIS), the international terrorist organization, is in control of vast territories in Iraq and Syria. A number of ISIL cells, with local insurgent groups pledging allegiance, are also known to operate in Libya, Yemen and other territories across the Middle East and North Africa.

Baghdad will go to court over a US airstrike, head of the Iraqi parliament's security and defense committee Hakim Zamili told Sputnik following the incident.

"This is very serious and I have asked the prime minister to launch an urgent investigation… We will go to court over this crime, there will be a hearing," Zamili said.

According to the lawmaker, the number of casualties may increase.

"The number of victims may increase, many were seriously injured and have not yet been taken to hospitals," Zamili added.

Claims of a US airstrike killing more than 20 Iraqi soldiers are not accurate, US Defense Department spokesman Maj. Roger Cabiness told Sputnik on Friday.

“This is not true,” Cabiness said when asked to confirm reports of the incident.