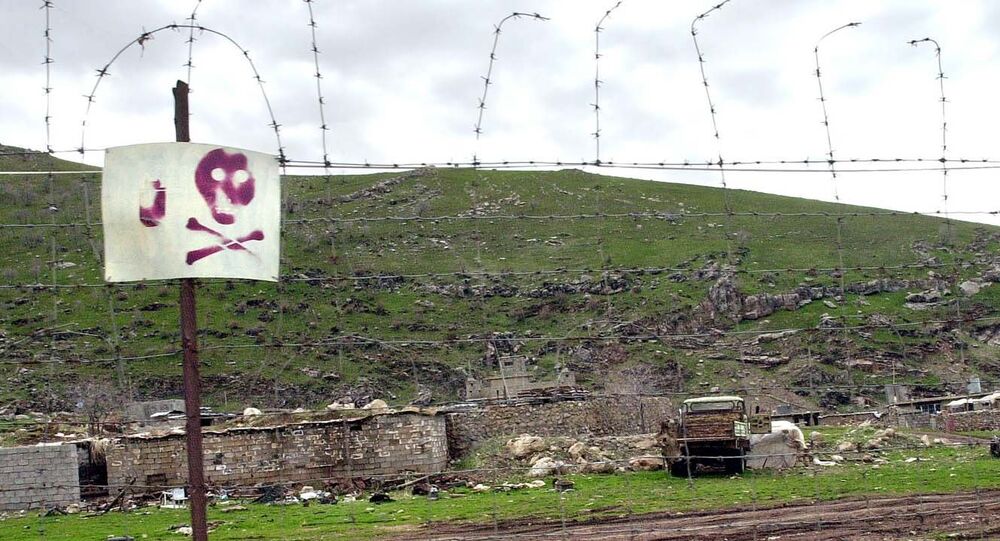 The US and France have recently claimed that Daesh, also known as ISIL, is developing chemical weapons but these allegations should be cautiously considered since Washington has already used similar claims as a pretext for the 2003 invasion of Iraq, investigative journalist Janet Phelan warned.

© AFP 2020 / GEORGE OURFALIAN
Syrian Army Destroys Terrorist 'Lifeline' to Turkey in Aleppo Province
George W. Bush accused Saddam Hussein of storing weapons of mass destruction and launched the second Gulf War in March 2003. The US invasion of Iraq, which lasted for almost nine years and left tens of thousands killed, was based on what Colin Powell, the then US State Secretary, later described as "deliberately misleading" intelligence.

In 2013, President Barack Obama accused Damascus of using chemical weapons against civilians in what was widely seen as a prelude to the US invasion of Syria.

"President Putin's diplomatic solution to this crisis – bringing Syria in to join the international treaty organization, the Chemical Weapons Convention – derailed this stated intent by Obama to make war on Syria and effectively stalled the US's intended invasion of Syria," Phelan noted in an article for New Eastern Outlook.

The latest US claims with regard to Daesh and chemical weapons should be viewed in the context of Washington's counterterrorism efforts in Iraq and Syria, the journalist asserted.

The US airstrike campaign, launched in August 2014, has largely failed to deliver on Obama's promise not only to destroy the terrorist group but also to degrade it prompting some to accuse the US of essentially backing Daesh. Phelan appears to share this sentiment.

© Fotobank.ru/Getty Images / Win McNamee
McCain's 'Terrible Ideas for Syria': Senator 'Wants US to Risk Open War With Russia'
The investigative journalist went as far as to claim that the US is violating the Chemical Weapons Convention.

"The US has now been caught red-handed in another covert program, facilitated by a secret handshake with selected pharmaceutical companies, to supply pre-determined targets with 'imposter pharmaceuticals.' These imposter pharmaceuticals, which come in the same packaging as ordinary pills, will cause heart attacks/strokes in those who unwittingly consume them," she asserted.

The journalist maintains that such pills, which she described as "covert chemical weapon," have been used to "eliminate political targets." In an open letter to the Chemical Weapons Convention, Phelan stated that she had such "imposter pharmaceuticals" in her possession and was ready to show a container full of them.

Fresh From Syria? UK-Based SOHR Reporting on 'Situation on the Ground'