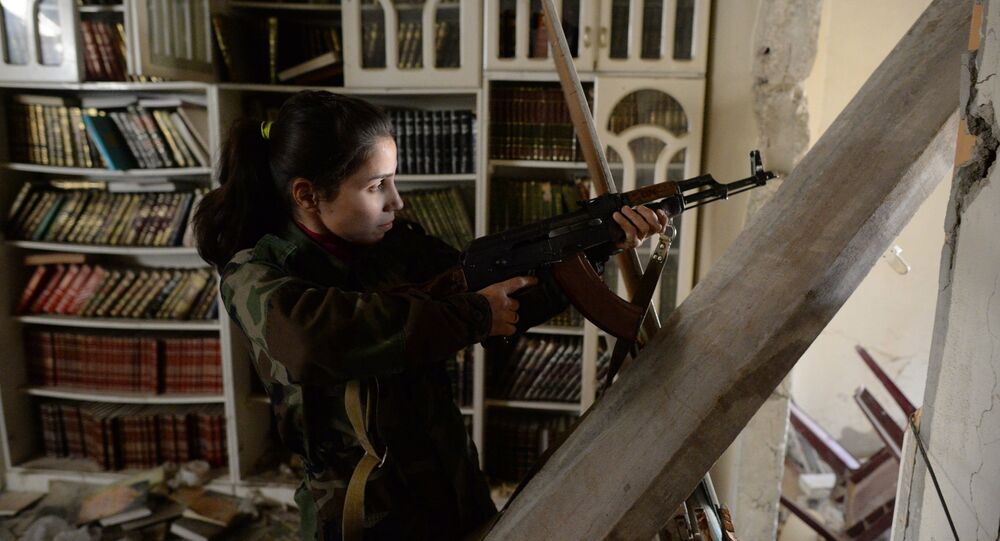 The advances of the Syrian Army against terrorists are not only backed up by Russian airstrikes but also by cutting-edge Russian-produced firearms, Rossiyskaya Gazeta wrote citing media reports.

© AP Photo / Alexander Kots
Syrian Army Liberates Latakia’s Border With Turkey From Terrorists
The newest MTs-116M sniper rifle was spotted in use by a female unit of the Syrian Army. The unit is currently engaged in fighting in the Damascus suburbs, near the municipality of Jobar.

The weapon was developed by Instrument Design Bureau, one of the leading Russian defense companies, in 1997.

According to its engineers, the MTs-116M is designed to hit targets with a single shot with maximum accuracy during special counter-terrorist operations. For this purpose, it is based on the MTs-116 7.62-mm bolt-action sporting sniper rifle. Its construction was upgraded to meet the military’s demands.

© Sputnik / Anton Denisov
Preliminary Tests of Russia's Advanced Sniper Rifle to Begin Next Year
"The rifle can easily be adjusted for the shooter. It has an adjustable stock, cheek pad and trigger," the company said on its website.

The rifle can be used in all weather and climate conditions. It has an effective range of over 700 meters and a weight of 6.5 kilograms with an unloaded magazine. Its barrel length is 66 centimeters.

For long-range firing, the rifle is equipped with the POSP 8x42 sighting system. A night vision scope is also available. A sniper bullet with a steel core is used. The rifle outperforms the MTs-116M and SVD in accuracy.