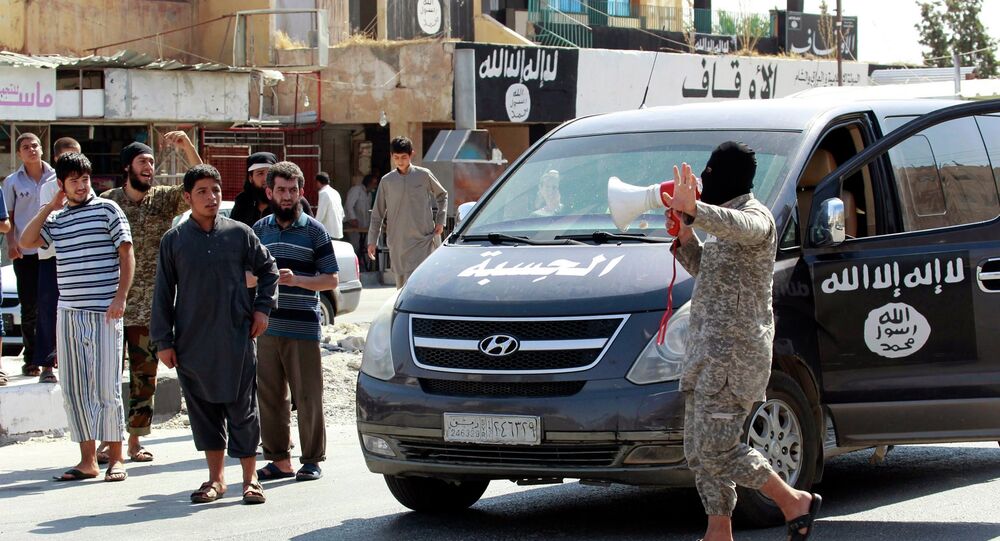 A British newspaper has acquired a leaked internal Daesh manual which details exactly how the terror group plans to run its self-proclaimed caliphate.

The 24-page manual, entitled 'Principles in the Administration of the Islamic State, and published by The Guardian, reveals the terror group's bureaucratic plans for the construction of their terror state, complete with over a dozen government departments, a treasury, and an economic system featuring centralized control over energy resources and other vital areas of the economy.

Moreover, Daesh (also known in the West as ISIL or ISIS) has plans for the equivalent of a foreign ministry, and a department of information, aimed at disseminating their fundamentalist propaganda.

© AFP 2021 / KARAM AL-MASRI
The Land of Terror: Is Daesh Syria’s Only Deadly Menace on the Ground?
Published between June and October, 2014, the document, said to have been written as a kind of internal civil service handbook, to be used to train a 'cadre of administrators', also features details on the group's plans for the construction of a military, from military ranks to the building of training camps.

Veterans, the document says, will be subject to two-weeks-worth of training each year, studying "the latest arts of using weapons, military planning and military technologies."

Moreover, the manual has a section on a "preparation camp for children" intended to indoctrinate young people and train them on the bearing and use of light arms, with "outstanding individuals" then "selected from them for security portfolio assignments, including checkpoints, patrols and various Amniyat [internal security] units."

The leaked document is said to have come from a businessman working within Daesh, via Aymenn al-Tamimi, an academic researcher who has worked over the past year to compile an extensive listing of Daesh papers which have become publically available.

The full text of the document, translated by al-Tamimi, can be found here.

According to a follow-up article published by the researcher, one of the most interesting points in the terrorists' plans are the calls for breaking down cultural differences between the Iraqi and Syrian fighters and those from other countries, aimed at "discouraging affiliations [based] on ethnicity, which of course may give rise to loyalties beyond those owed to the Caliph."

Furthermore, al-Tamimi notes that the document shows Daesh's shrewdness, suggesting, only months after the caliphate was proclaimed, that those who purchase, refine, transport and sell oil and gas from fields under Daesh control "need not have [an] allegiance" to Daesh, thus ensuring the success of the profit-making enterprise.

© AP Photo / Militant Website, File
Unexpected Source of Income: Charitable Organization in Italy Funded Daesh
Just as opportunistically, according to the analyst, the text also emphasizes that former Syrian and Iraqi government employees needed for Daesh projects, from municipal workers to medical personnel, would now be forced to work under the new authorities, under the threat that their property would be confiscated if they refused.

Ultimately, what the document seems to suggest is that far from being simply an odd-ball collection of bandits and fundamentalist fanatics, Daesh is much more than that –with detailed bureaucratic plans aimed at effectively governing the areas under their control, put into effect less than three months after the declaration of their self-proclaimed state.