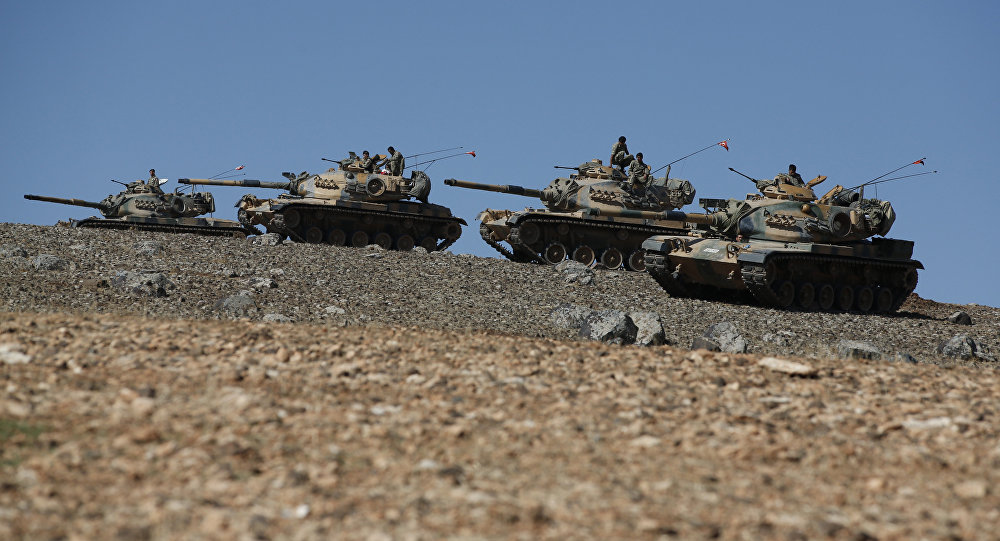 By shooting down a Russian bomber and sending forces to neighboring Iraq, Ankara is adding fuel to the fire in the Middle East to prevent major powers from joining forces to defeat Daesh, also known as ISIL, Russian Senator Franz Klintsevich told RIA Novosti.

"The Su-24 tragedy, as well as the invasion of Turkish troops in Iraq are linked. The Turkish regime is trying to escalate tensions in the region to prevent a counterterrorism coalition from being formed," Klintsevich observed.

A so-called "war of all against all" will put an end to efforts aimed at bringing together major stakeholders, interested in defeating extremists. This is exactly what the country, which is engaged in illegal business with Daesh, is trying to achieve in the Middle East.

© AFP 2019 / ARIS MESSINIS
Baghdad: Turkish Tanks Enter Iraqi Province Without Authorization
"We've already said this: all masks have been thrown down, we have to be ready for any provocation," Klintsevich added.

The remarks come following reports that Turkey sent 130 soldiers to northern Iraq to allegedly train local Kurdish forces. The move was described by Baghdad authorities as "a serious violation of Iraqi sovereignty."

Iraqis more upset at Turkish presence in Ninewa than they were when Mosul fell to ISIS.