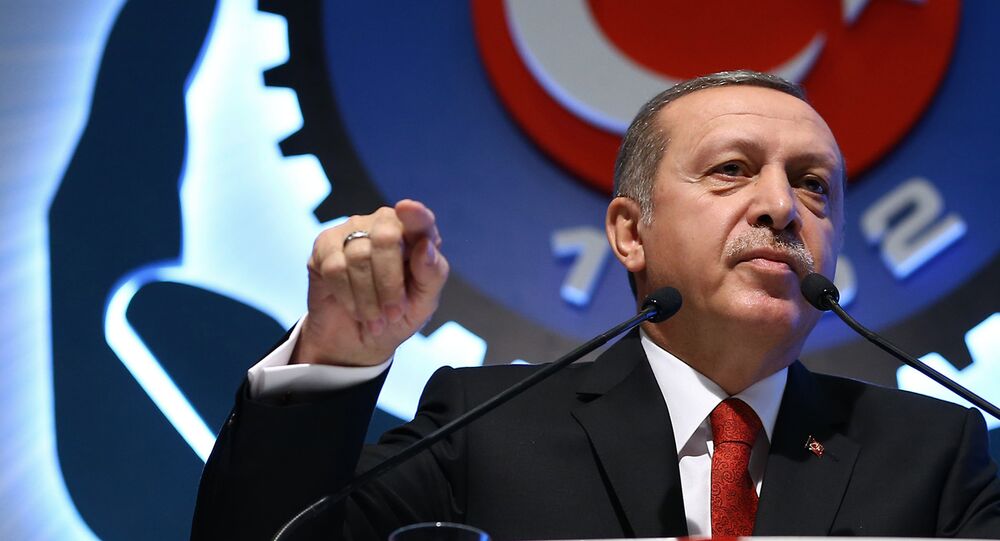 Turkish President Recep Tayyip Erdogan sought the creation of a safe zone in Syrian airspace as a pretext to give Turkish forces a foothold in the war-torn country, recreating the regional influence of the Ottoman Empire, Director of the Organization for Democracy and Freedom in Syria Ribal Assad told Sputnik on Friday.

© AP Photo / Lefteris Pitarakis, File
Turkey Trying to Revive Ottoman Empire by Dividing Syria, Iraq - Damascus
WASHINGTON (Sputnik), Leandra Bernstein – On October 5, Erdogan proposed the establishment of a no-fly zone and a safe zone in Syria, and increases to training and the provision of equipment for the Free Syrian Army as a stopgap measure to the high number of Syrian refugees fleeing to Europe.

"Before the Russians moved into Syria, Erdogan wanted to use the refugee crisis as an excuse to move Turkish troops into Syria and create a no-fly Zone and a safe zone, and in the process attacking the Kurds who have been gaining ground and have been a formidable force against his Islamic extremist proxies," Ribal Assad said.

He claims Erdogan sought to let the Turkish-supported Islamist "gain as much territory as possible in Syria and Iraq." The international community would allow Turkish forces to "move in and impose order" under the pretext of the Islamist takeover.

Syria, formerly a part of the Ottoman Empire, is a "natural place" for Turkey to attempt to spread its influence south into the Arab world. The consolidation, under Erdogan of a Sunni Muslim new Ottoman Empire would effectively block any further spread of Iranian Shia influence, he explained.
‪

"He wants to recreate the Ottoman Empire," Ribal Assad said of President Erdogan. "He sees himself today as the leader of the Muslim Sunni world, against the Iranian led Shia-axis."