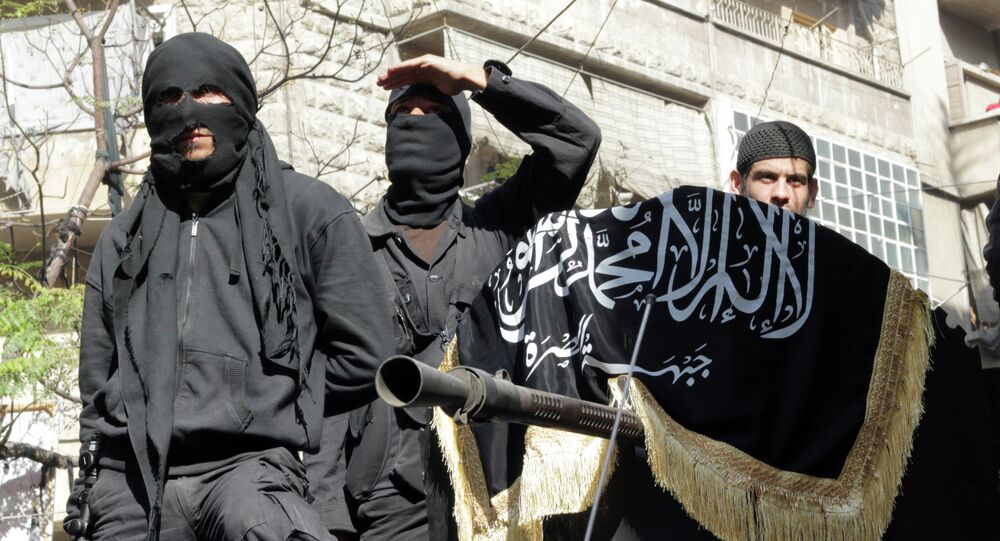 Lately Daesh (ISIL/ISIS) has apparently become the only terrorist group in Syria making the headlines around the world, however this militant group is not the only Jihadi terrorists challenging President Assad and his army on the ground. Let’s have a look at what other deadly menaces threaten the Syrian people in the course of their everyday life.

Whatever terror and destruction Daesh (also known as ISIL/ISIS) leaves on the ground in Syria, it is not the only threat to the Syrian people and challenge to the legitimate government of President Assad.

A similar danger is emanating from other terrorist groups present on the ground. Let’s have a look at two other similarly frightening groups.

© AFP 2021 / RAMI AL-SAYED
Islamic fighters from the al-Qaida group in the Levant, Al-Nusra Front, wave their movement's flag as they parade at the Yarmuk Palestinian refugee camp, south of Damascus, to denounce Israel’s military offensive on the Gaza Strip, on July 28, 2014

It claims to rival Daesh as a “sophisticated, intelligent, strategic actor in the region and continues to enjoy a dangerous freedom to operate in Syria,” according to the US-based think tank, the Institute for the Study of War.

The two groups, it says, share common goals, including a revived Islamic Caliphate.

“Whereas Daesh (ISIL/ISIS) has announced its state and tried to legitimize it by conquest, al-Nusra Front is following AQ leader Ayman al-Zawahiri’s method of fomenting a religious and social revolution by embedding itself within an indigenous insurgency.”

“The Syrian war has provided al-Nusra a nearly ideal environment within which to implement this strategy on behalf of al-Qaeda, and it has enjoyed worrying success to date.”

The view is echoed by Daniel R. DePetris, an analyst at Wikistrat, Inc., a geostrategic consulting firm.

“The senior commanders and operatives of al-Nusra and the Islamic State may be at each other’s throats today, but the two organizations very much operate in the same circles,” reads his article in The National Interest magazine.

“Abu Mohammad al-Jolani, al-Nusra’s leader, was assigned by Abu Bakr al-Baghdadi (the leader of the Daesh group) to open up an affiliate branch in Syria in order to take advantage of the deteriorating security environment when the country’s civil war was escalating,” he adds.

He also adds that “if the Islamic State is known for beheading its enemies, burying its prisoners in mass graves and embarrassing the Iraqi army in the cities of Mosul and Ramadi, al-Nusra’s calling card is successfully planning and executing operations against Syrian army and government facilities that one would think are highly protected by Assad’s security apparatus.”

© AP Photo / Militant website via AP
Gifts From Uncle Sam: Al-Qaeda Wages War in Syria With US Weaponry
Interestingly enough, recent reports suggest that al-Nusra is waging war in Syria with US-made armaments. Earlier in November a video was released where an Al-Nusra Front field commander was thanking the Free Syrian Army (FSA), commanders which the US has touted as a “moderate opposition group”, for supplying them with US-made anti-tank TOW missiles (“Tube-launched, Optically-tracked, Wire-guided").

The group however is described by the Institute for the Study of War as “more subtle and insidious” than Daesh and therefore “more difficult to contain or defeat.”

“While Daesh (ISIL/ISIS) pursues direct, overt, and top-down control, al-Nusra leverages an elite military force to win allies among the Syrian armed opposition and to sponsor locally tailored governance in ungoverned areas of Syria.”

Another rebel group on the ground in Syria is Ahrar al-Sham. According to the US-based news website The Long War Journal, “three jihadist groups in Syria have formed a joint operations room in the Damascus countryside to combat the Syrian regime and Russian forces. The three organizations are al- Nusra Front, Ahrar al-Sham and Ajnad al-Sham.”

© AFP 2021 / KARAM AL-MASRI
Fit to Rule: Should Former Terrorists Be Allowed Into Syria Transition Process?
The alliance, named Jund al Malahim (“Soldiers of the Epics”), is the latest in a series of jihadist-led coalitions formed by al-Nusra, an official branch of al-Qaeda, and Ahrar al-Sham, which is linked to al-Qaeda,” it says.

“The most prominent of these joint ventures is Jaysh al Fateh (“Army of Conquest”), which overran most of the Idlib province beginning in March.”

The news website Syria Deeply defines Ahrar al-Sham as “a group formed by former Islamist prisoners and Iraqi war veterans, [which] was one of the first armed movements to arise in Syria. With an extremely efficient structure and fully backed by Turkey and clerics and countries in the Gulf, it’s Salafist ideology and nationalist goals has rendered it a powerful “swing voter” in the battle over the ideological direction of Syria’s opposition.”

However, according to the Middle East Eye website, the group apparently is “going through a moderate ideological transformation.”

© AFP 2021 / BARAA AL-HALABI
Opposition fighters from the Ahrar Al-Sham brigade, part of the Islamic front coalition, hold a position in the Sheikh Lutfi neighbourhood of the northern Syrian city of Aleppo during ongoing clashes with government forces on January 27, 2014

“At least that’s what one would think from the recent spate of PR, suggesting Washington should ally with the group.”

However, the website says, despite claims that Syrian rebel group Ahrar al-Sham is taking a ‘moderate’ turn, its leaders still pursue a sectarian vision for the region.