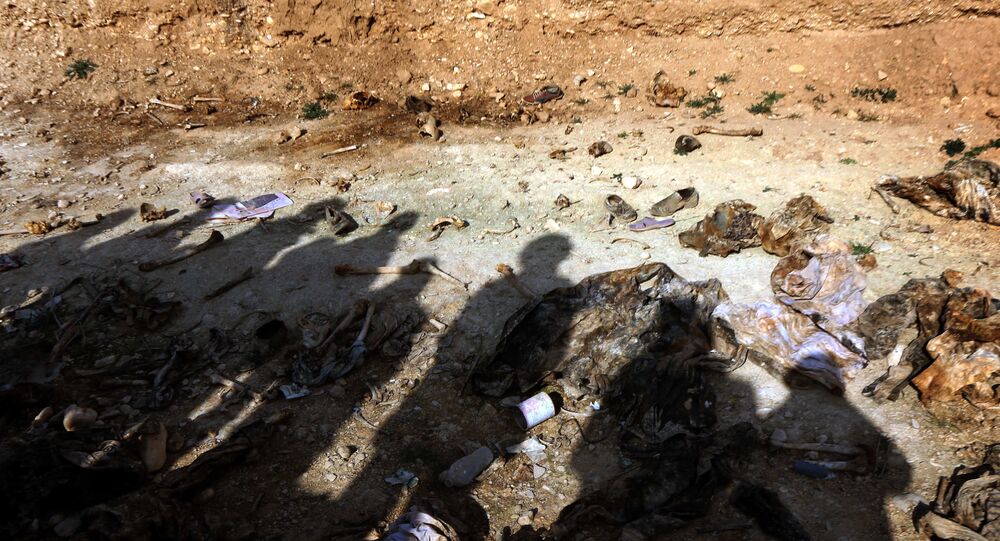 A new chilling discovery of a genocidal site with remnants of more than 120 Yazidis, who were murdered by militants of the self-proclaimed Islamic State (ISIL) terrorist group in Sinjar, yet again confirms the murkiest suggestion that there are thousands of jihadists’ victims to be found after recapturing the region.

A local Iraqi Kurdistan official confirmed on Saturday that the burial contains as estimated 123 bodies, AFP reported. The area around the mass grave was crammed with explosive devices.

© AFP 2021 / Safin Hamed
Two More Possible Genocide Sites Discovered in Iraq, Courtesy of ISIL
It is the sixth Yazidi genocidal site discovered so far after Kurdish militia forced ISIL out of the Sinjar region earlier this month. There are approximately 15 mass graves expected to be found around the town of Sinjar, according to the Kurdish news outlet Rudaw.

As the grave, located 10 km (6 miles) from Sinjar, had been-booby trapped, no excavation has yet been performed, and the number of victims is based on accounts of people who survived the execution.

According to UN estimates, at least 5,000 children, women and men have been killed by ISIL militants since a summer 2014 offensive, when ISIL captured the region, systematically enslaving, raping and killing thousands of local residents.

Yazidis practice an ancient syncretic religion linked to Zoroastrianism, which Islamists regard a heresy.

..what #Yezidi neighbours and #daesh did to #yezidi..#genocide #sinjar pic.twitter.com/8H6VRePjYK

The Kurdistan Region Security Council announced that the Peshmerga militia and allied Kurdish troops reclaimed Sinjar November 13th, which was held by the Islamic State for more than a year.