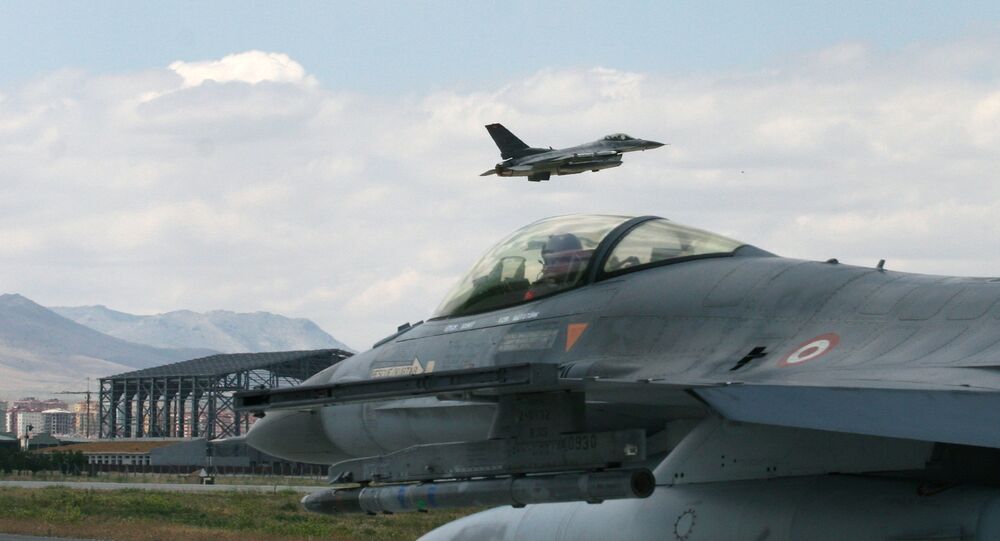 Ankara had no legitimate reason to shoot down the Russian bomber involved in anti-ISIL operation in Syria since the aircraft never left Syrian airspace, giving credence to the fact that Turkey could have ulterior motives.

These could well include dragging NATO into the Syrian conflict, ruining efforts to create a broad anti-ISIL coalition and even retaliating for ruining illegal oil business with the brutal group.

Wagging the dog: Turkey wants NATO in and Russia out of Syria

Islamist-leaning Turkey has long wanted Bashar al-Assad gone. To that end Ankara has been overtly supporting radical groups, who are trying to overthrow Syria's legitimate leader. However, since Russia became involved in counterterrorism efforts following a request from Damascus, ousting al-Assad is no longer an option.

Moreover, the Russian-led coalition is quite capable of putting an "end to Erdogan's dream of toppling Assad or continuing to fuel the war with terrorists that are provided a safe haven on Syrian soil," journalist Mike Whitney noted in an article for Information Clearing House. "This is why the Su-24 fighter was shot down on Tuesday."

© Sputnik / Dmitry Vinogradov
Erdogan's Twisted Logic: S-400 Must Not Shoot Down Turkish Fighter Jets Over Syria
The logic is simple: downing a Russian bomber would necessarily lead to a retaliation strike from Moscow thus dragging NATO into the Syrian conflict, since Turkey is a member of the alliance.

The incident "fits perfectly with the way in which the Turkish government has been ratcheting up tensions on the border, using its jihadi allies to seize Syrian territory, and trying to incite a violent reaction that will force greater NATO or US involvement," he added.

There is no need to worry. Whitney doubts that Russian President Vladimir Putin will "take the bait and overreact" to what the journalist referred to as Turkey's "obvious and pathetic provocation."

Preventing a broad anti-ISIL coalition from being created

Since Turkey does not want Damascus-led forces to destroy ISIL or other extremist groups in Syria, it should be greatly opposed to the idea of creating a broad anti-ISIL coalition. If created, the coalition would see the US, Russia, France and other countries present a united front against ISIL.

The downing of the Russian bomber in Syria has complicated these efforts.

"What Turkey has done is to bring the NATO alliance yet another step closer to an open conflict with Russia, and at a minimum it has sundered the chances for a NATO-Russian coalition against ISIS in Syria, which perhaps was Erdogan's plan all along,"  former advisor to the US-Russia Presidential Commission at the US State Department James Carden wrote for the Nation.

ISIL has long financed its activities by smuggling petroleum to black markets in the Middle East, particularly in Turkey.

"Turkish commodity dealers have funded ISIS through their purchase of, by one estimate, $50 million a month in black-market oil. Indeed, reports have surfaced alleging that none other than Erdogan's son Bilal has been a key financial benefactor of this unseemly business," Carden observed.

© AP Photo / Petros Karadjias
'Erdogan Family's Trace in Su-24 Downing': Revenge for Ruining Shady Oil Deals?
The second phase of Russia's aerial campaign launched last week has been focused on undermining ISIL's economic base, including oil tankers and refineries. The group, according to Russian Defense Minister Sergey Shoigu, is now losing some $1.5 million daily as a result of these efforts.

Against this backdrop, the downing of the Russian bomber could be viewed as an act of retaliation for ruining shady deals or an attempt to keep the illegal business going.

"Erdogan's family is directly involved in the incident. … Quite possibly, the Su-24 crash was an act of revenge," Stanislav Tarasov, an expert on Middle East, told Sputnik.