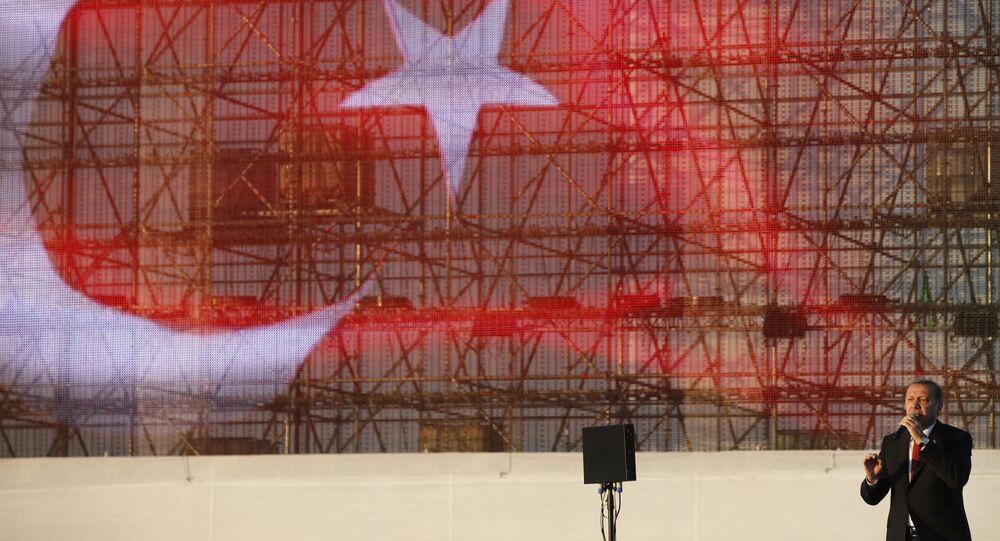 Ankara seeks to restore the disintegrated Ottoman Empire by dividing Syria and Iraq and turning them into Turkish protectorates, the Syrian information minister said.

DAMASCUS (Sputnik) – The Turkish leadership wants to split Syria up and destroy it in hopes of reviving the Ottoman Empire and its previous territories, Syrian Information Minister Omran al-Zoubi said.

“Turkey’s goal is to try and revive the Ottoman Empire that was earlier divided into provinces. There were the provinces of Damascus, Mosul, Aleppo, Jerusalem, Beirut, and so on, and it is this main goal that’s leading to the wish to divide Syria and Iraq into emirates or provinces that would exist under the protectorate of the empire and in its interests. These types of ambitions raise controversy with the United States,” al-Zoubi told RIA Novosti in an interview.

“Russia’s active intervention unexpectedly changed the balance of powers. First, this is the actual existence, and second, [the West] wants to drive Russia out of the Arab world and make it an enemy of the region like Libya or Yemen,” al-Zoubi said.

West's Real Goal in Syria is to Destroy the Country

“In 2015, the Syrian leadership, under the true support of Russia with President Vladimir Putin at the head, was able to reveal the West’s actual policy of wanting to destroy Syria using the slogan of peaceful settlement,” al-Zoubi told RIA Novosti.

The minister said that everything predicted by Damascus in 2015 has come true in that terror would spill beyond Syria’s borders.

“The pressure created by terrorists in the world should convince everyone that the fight against terrorism demands common coordinated efforts,” al-Zoubi said.

© Sputnik / Vladimir Astapkovich
Turkey Must Define Downing of Su-24 Before Slamming 'Russian Aggression' - Kremlin
Russian forces have been conducting airstrikes against extremists in Syria since September 30, at the request of Syrian President Bashar Assad.

On Tuesday, a Russian Su-24 was downed by an air-to-air missile launched by a Turkish F-16 jet over Syrian territory, falling 4 kilometers (2.5 miles) from the Turkish border. Putin described the Turkish attack as a "stab in the back" carried out by "accomplices of terrorists."

The Ottoman Empire was founded in 1299 and broken up in 1923. It encompassed current Syrian, Iraqi and Lebanese territories, among others.