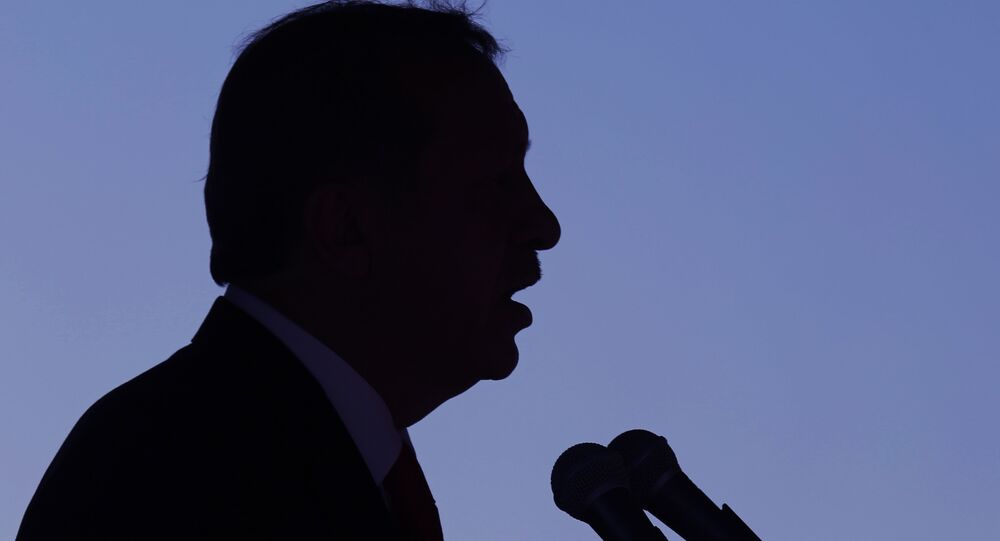 The shooting down of the Russian Su-24 bomber over Syrian territory earlier this week could well be President Erdogan's act of revenge, especially considering that his family is rumored to be involved in ISIL's illegal oil trade, Stanislav Tarasov, an expert on Middle East, told Radio Sputnik.

The downing of the aircraft is "a severe provocation. Erdogan's family is directly involved in the incident. … Quite possibly, the Su-24 crash was an act of revenge," the analyst noted.

The radical group has been making up to $2 million daily from selling stolen petroleum to middlemen in Turkey. On Thursday, Russian Prime Minster Dmitry Medvedev mentioned that some Turkish officials are involved in ISIL's illegal business. He did not provide specific names.

​A Turkish F-16 shot down the Su-24 on Tuesday, claiming that the aircraft violated its airspace. Russian officials and the Su-24 pilot, who survived the crash, insist that the plane did not cross into Turkey. The crew, according to the pilot, did not receive any warning prior to the attack.

© REUTERS / Murad Sezer
Turkey Has No Legal, Economic Basis to Close Bosphorus for Russian Ships
The Su-24 was involved in Moscow's anti-ISIL efforts in Syria aimed among other things at undermining the group's economic base, including its oil trade. Militants are said to be losing $1.5 million daily since Russian forces started hitting oil tankers and refinery facilities.

Tarasov also assumed that the Turkish president could have direct ties to Islamists.

"Turkey was recently rocked by a major corruption scandal. We could soon learn that President Erdogan himself is directly linked to ISIL. … Erdogan is constantly keeping the Turkish society on edge. The Turks are always fighting against domestic and foreign enemies. This has led to Erdogan severing ties with many countries," the analyst observed.

© Sputnik / Igor Zarembo
Paris, Berlin Not Backing Ankara on Su-24 Crash - Lawmaker
Erdogan, according to Tarasov, is increasingly becoming the "enemy No. 1" in the Middle East. The downing of a Russian bomber will only reinforce this trend.

The Su-24 crash "will affect the regional balance of power. Erdogan is gradually becoming isolated. Many view him as a corrupt official and a dictator. Turkey is turning into a destabilizing force in the Middle East," the analyst asserted.

However, the Turkish society does not want to lose a partner like Russia. Many, according to Tarasov, count on Moscow to help Turkey maintain its territorial integrity due to the country's proximity to the area of instability.

Turkey to Cooperate With Russia on Downed Su-24 - Turkish PM