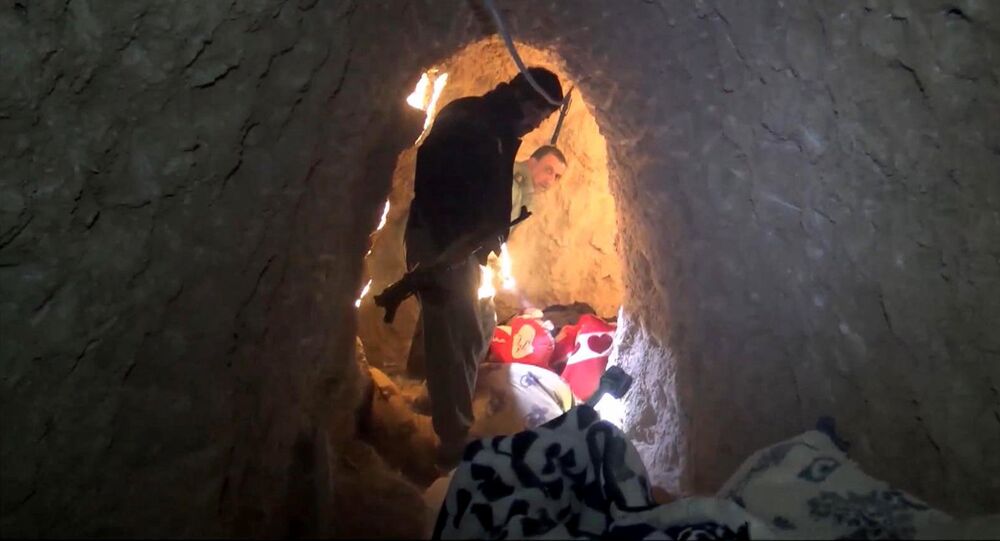 Secret underground tunnels used by ISIL militants have been discovered under the Iraqi town of Sinjar. Kurdish forces made the discovery of the hideouts strewn with US made weaponry and drugs.

The network of tunnels stretch for hundreds of meters, and are believed to have been dug by the forced labor of prisoners.

Sinjar has only recently been liberated from ISIL control by Kurdish troops in the last two weeks.

Newly obtained footage shows Kurdish forces examining the now abandoned tunnels. Cluttered sleeping quarters can be seen storing everything from copies of the Quran and bedding to US-made ammunition and drugs.

Incredibly, some of the tunnels appear to be wired with electricity.

They were used by militants to hide underground from the threat of anti-ISIL coalition, as well as Russian airstrikes.

Some experts believe they reveal the strategy of the extremist fighters was to try and draw attackers into an underground battle. The extremists would be more protected from airstrikes and their technological inferiority would not be such a stark disadvantage.

"Daesh [ISIL] dug these trenches in order to hide from air strikes and have free movement underground as well as to store weapons and explosives. This was their military arsenal."

Entrances were hidden under buildings, which then led to passageways into the tunnels.

© AFP 2020 / Safin Hamed
Mass Graves of Yazidi Women Butchered by ISIL Unearthed in Iraq
Nearby was the macabre discovery of what is thought to be two Yazidi mass graves. Bones and skulls were found bleached and exposed in the sun, next to the torn rags of old clothing.

The Yazidis are an ethnic and religious minority in the region, being persecuted, raped and murdered by ISIL extremists.

The beleaguered Iraqi town had been held by ISIL for more than a year before being liberated by Kurdish troops.

Whilst some of the underground tunnels remain intact, the town above has now collapsed into rubble.

The result of a year of brutal fighting and airstrikes that is continuing to devastate not just Sinjar, but the rest of the region occupied by ISIL militants.