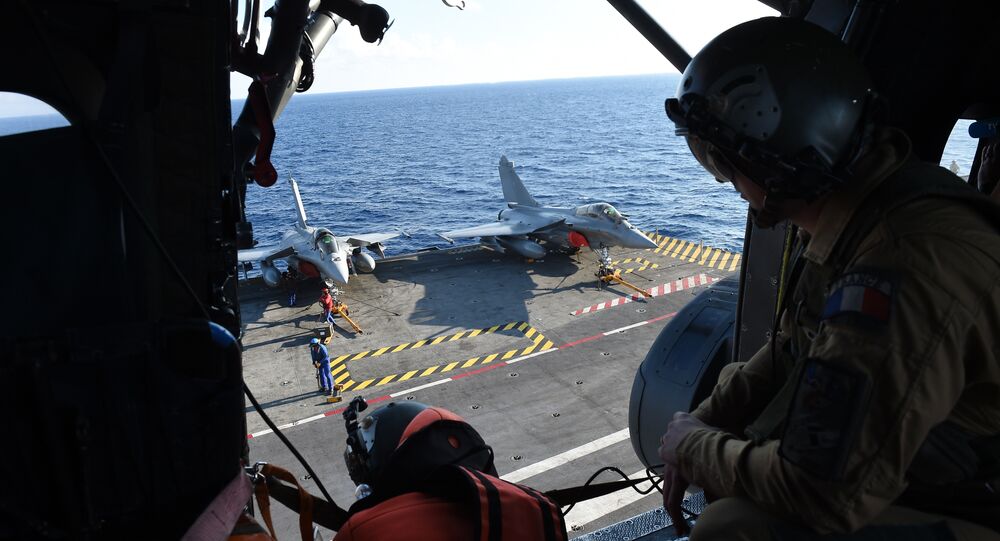 French carrier Charles de Gaulle carried out their first strikes against IS. pic.twitter.com/H7TzG3bc4S

© AFP 2021 / ANNE-CHRISTINE POUJOULAT
France's Charles de Gaulle to Strike ISIL Targets Bringing Maximum Damage
The French media reported that the Charles de Gaulle's mission is expected to last at least four months and that it may be prolonged.

France's only aircraft carrier, the Charles de Gaulle was deployed in the Mediterranean late Saturday after the November 13 terrorist acts in Paris saw 130 killed and over 360 injured.

Earlier it was reported that Charles de Gaulle will be joined by an anti-submarine frigtate La Motte-Picquet, a multi-purpose frigate Aquitaine and an auxiliary ship called Aviation.

© AFP 2021 / PATRICK BAZ
Beyond the Powerful Name: Closer Look at Firepower of France’s Charles de Gaulle Aircraft Carrier
The French aircraft carrier will also be accompanying a destroyer of the royal Navy of Breat Britain HMS Defender. In addition, the carrier's convoy also includes a submarine.

The Islamic State (ISIL) jihadist group has claimed responsibility for the coordinated mass shootings and suicide bombings near a football stadium, in a concert hall and outside several restaurants in Paris.

Hollande imposed a nationwide state of emergency, since extended by French lawmakers. The presumed organizer of the Paris attacks, born in Belgium and suspected of training in Syria, was confirmed killed in an anti-terror raid in the Parisian suburb of Saint-Denis last week.

The UN Security Council voted on Saturday to adopt an anti-terrorism resolution drafted by France to "redouble and coordinate" efforts against ISIL.