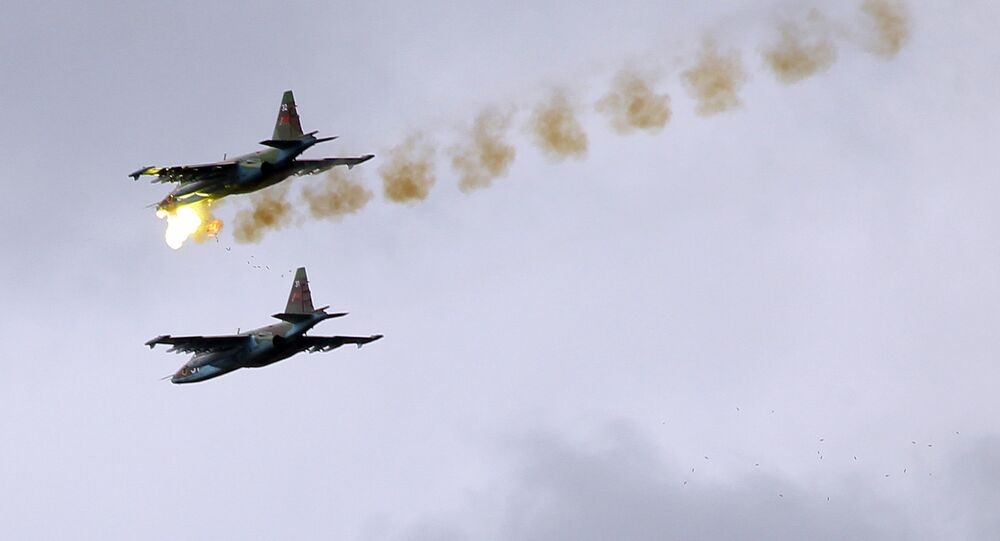 © AFP 2021 / GEORGE OURFALIAN
Sandblasting: Syrian Army Advances on ISIL in Aleppo Province With Russian Air Support
According to Konashenkov, over the past two days the Russian warplanes have continued to actively engage in reconnaisance and to launch airstrikes at the specific targets of terorist groups operating in Syria.

In the past two days terrorists in Syria have sustained their biggest losses in the provinces of Deir ez-Zor, Raqqa and Aleppo, the Russian Defense Ministry spokesman stated.

"According to information available to us through the Baghdad information center, terrorists have suffered their biggest losses in the provinces of Deir ez-Zor, Raqqa and Aleppo," Igor Konashenkov said.

Russian Air forces have completely destroyed the terrorist command center near Aleppo, according to Konashenkov. The terrorists are disorganized and go deep into the terrorist-controlled areas, trying to build new stronghold.

#SYRIA Near #Aleppo,airstrikes resulted in complete disruption of militants' control system;terrorsts are retreating digging in at new lines

Among other destoyed targets are an Islamic State terrorist oil storage facility, oil refineries, and a convoy of oil tanker trucks, he said.

“Russian bombers from the Hmeymim Airbase have destroyed a convoy of oil tanker trucks and oil refineries in the oil field regions in Syria’s northern and eastern regions. A large oil storage facility was destroyed 15 kilometers to the southwest of the city of Raqqa,” Konashenkov said.

#SYRIA In Al-Makhimira desert, 50 km to the north of Deir ez-Zor, #Su34 bombers made strike on petrol tanks

The spokespman added that Su-34 bombers also destroyed an IS-controlled oil refinery 50 kilometers to the south of Raqqa, which was one of the terrorists' major financial sources.

As a result of the Russian airstrikes the terrorists operating in the Syrian towns of Saraqib (Idlib province) and Qalaat al-Madiq (Hama province) have sustained serious losses.

#SYRIA Near Serakab (#Idlib) and Qalaat al-Madiq (#Hama), left their positions without permission despite their leaders’ threats

“Despite their commanders’ orders, the biggest part of the terrorist groups in these deserted their positions. They dispose of the clothes and ISIL symbols to blend with the locals,” Konashenkov stated.

After the combat mission all Russian planes have safely returned to the Hmeymim airbase.

“Over the last five days, Russian planes have destroyed more than 1,000 tanker trucks carrying crude oil to refineries under the control of the IS terrorist group,” the spokesman said.

Russia has been launching airstrikes against the IS on Assad’s request since September 30. A US-led international coalition has also been conducting an aerial campaign against the militants, but without approval of Damascus or the United Nations.