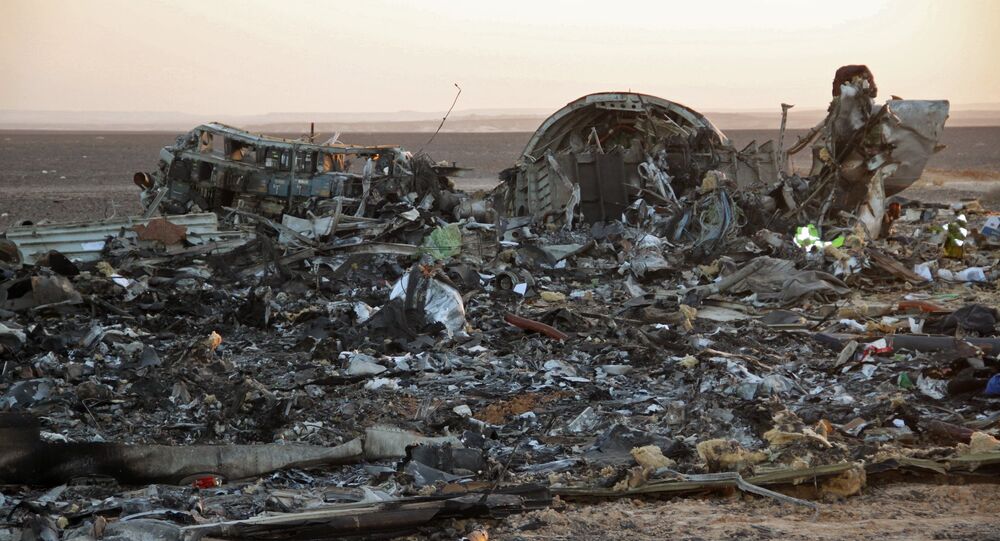 The picture published by the ISIL terrorist group depicts a Schweppes Gold beverage tin can and an alleged detonator.

© Sputnik / Maxim Grigoryev
A321 Crash in Egypt: Bomb Apparently Planted by Sharm el-Sheikh Airport Employee - Media
The online magazine of the Islamic State terror group, forbidden in Russia, released a picture of an improvised explosive device, which was supposedly carried onboard the Russian A321 airplane that crashed in Egypt’s Sinai Peninsula by militant collaborators, according to Reuters and the Associated Press.

A Schweppes Gold beverage can  and an alleged detonator are featured in the photo. According to the AP, IS claims that terrorists carried the bomb on board after finding a loophole in Sharm el-Sheikh airport’s security system.

In addition, Reuters reported, terrorists claimed that they were aiming to bring down a plane of one of the Western countries over the Sinai Peninsula, but changed their plans soon after Russia launched an operation against IS in Syria.

© Sputnik / Maxim Grigoryev
A321 Crash, Paris Attacks Represent War Against Civilized World - Medvedev
The largest disaster in the history of Russian and Soviet aviation occurred on October 31: the Kogalymavia-operated Airbus A321 heading from Sharm el-Sheikh to Saint-Petersburg crashed in the Sinai Peninsula. There were 217 passengers and seven crewmembers onboard. They all died.

On Tuesday, November, 17, the Russian Federal Security Service head Alexander Bortnikov said that airliner crashed because of a terrorist attack.