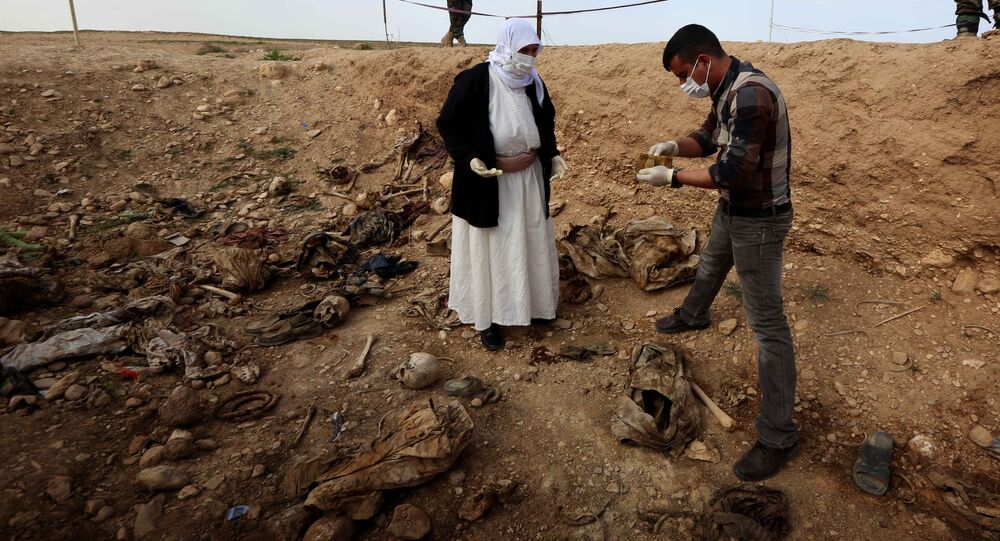 While the world mourns the victims of the terror attacks in Paris, more than three thousand miles away in Iraq, two mass graves have been discovered containing at least 80 bodies of middle-aged Yazidi women.

Not young enough to be used as sex slaves by Islamic State militants, considered a liability, the women have been slaughtered and discarded in Sinjar. According to the local mayor Mahma Xelil, clumps of hair, bones and money belonging to the elder tribes-women were scattered around a ditch.

How many yazidi women were killed here by IS? Suspected mass grave will be disinterred by experts, the Kurds say. pic.twitter.com/cDePyM18s5

It's thought 80 bodies of women aged between 40 and 80 years old have been murdered by ISIL.

The sole intention of Islamic State is to dehumanize the Yazidi people and eradicate the race. The ancient tribe can be traced back to ancient Mesopotamia and Iraq, but are considered as devil worshippers by ISIL militants.

"They're not interested in the Yazidi people, full stop. They're not considered human."

"The men are killed, the young women are used as sex slaves, older women have no use," Dr Hunter told Sputnik.

The graves were discovered after Kurdish forces freed Sinjar from Islamic State rule.

© AFP 2021 / Safin Hamed
Displaced Iraqi people from the Yazidi community, who fled violence between Islamic State (IS) group jihadists and Peshmerga fighters in the northern Iraqi town of Sinjar, gather around their tents at a refugee camp set up on Mount Sinjar on January 15, 2015.

The first grave contained corpses of older women. The second is believed to contain men, older women, as well as children.

"In the Middle East, families care for older people, they don't have the welfare service like the West. So when you remove the men, children and young women who would usually support them, then these women have no income, so they're considered a liability. This is why they were probably murdered."

The graves are yet to be excavated but the intentions behind killing the middle-aged women are painfully clear. With the rest of their family slaughtered and their daughters forced into sex slavery — unable to mourn their mothers — ISIL continue to butcher Iraq's Yazidi minority.