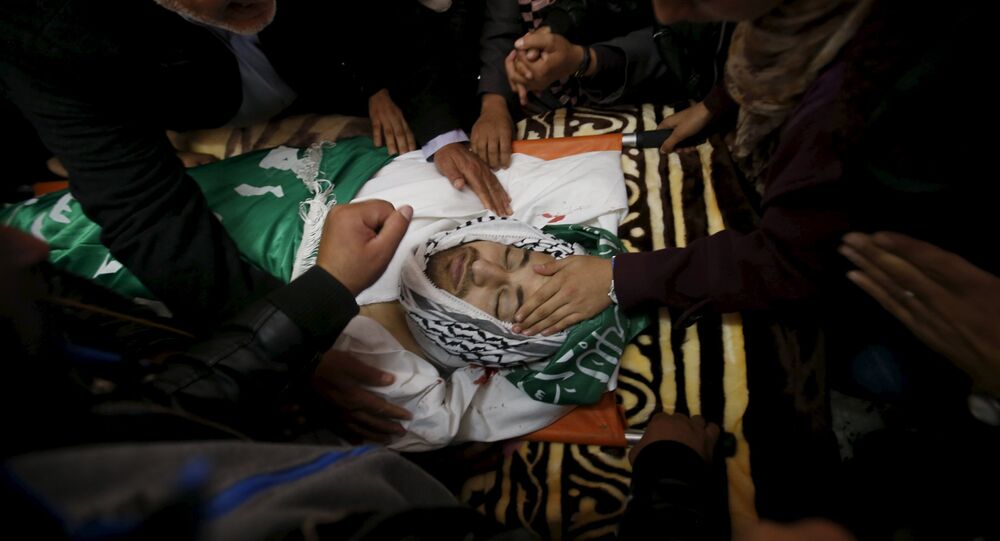 Before dawn on Thursday, Israeli forces entered a hospital in the West Bank disguised as a Palestinian family, in an ambush that resulted in the death of a relative of a man they suspect of stabbing an Israeli settler two weeks ago.

© REUTERS / Ammar Awad
East Jerusalem Hospitals Pressured to Give Up Injured Palestinian 'Terrorists'
More than 20 undercover Israeli soldiers and Shin Bet agents, some wearing fake beards and one posing as a very pregnant woman in a wheelchair, were recorded by the Hebron hospital's surveillance cameras as they entered the facility in disguise, then drew guns and disappeared into one of the wards, leaving minutes later and wheeling out a Palestinian man — apparently the suspect they sought — in the chair. Abdallah Shalaldeh, 27, was shot multiple times just after he left a bathroom in the al-Ahly hospital, witnesses said, while his cousin, Azzam Azat Shaaban Shalaldeh, 20, reportedly a Hamas affiliate who was being treated for gunshot wounds he sustained in an earlier encounter with an Israeli, was captured in the raid.

"They handcuffed his brother [Bilal Shalaldeh] with a belt. But when his cousin Abdallah came out of a bathroom on the ward they shot him five times before taking Azzam in the wheelchair they had brought. This is an outright crime. No one should violate hospitals," the Guardian quoted hospital director Jihad Shawar as saying.

"Hospitals are supposed to be the safest places on earth," Shawar told Voice of Palestine Radio.

Israel confirmed its security forces performed the swoop, as Azzam was suspected of stabbing an Israeli settler around two weeks ago in the West Bank. They claimed Abdallah was killed after scuffling with the soldiers in the overnight raid, a story witnesses deny.

"They (Israelis) had their fingers on the trigger," hospital spokesperson Bassem Natshe told the New York Times, adding that there was no indication Abdallah was armed and that there were at least 10 armed agents in the room.

"It was around 3am and I was asleep when a large number of undercover soldiers arrived," recounted Bilal Shaladeh, speaking at Abdallah's funeral outside Hebron later Thursday. "They put the other patients in the corner and tied my hands with a belt. When Abdallah came out of the bathroom where he was washing his hands in preparation for morning prayers they shot him and left him to bleed on the floor."

Hospitals are generally considered protected locations, even for enemy combatants, the Guardian reported. But this was not the first armed raid by Israeli forces in a Palestinian hospital this year. Last month, undercover Israeli forces snatched a man they believe shot an Israeli couple from a hospital in Nablus, in the West Bank. The New York Times reported Israeli police have repeatedly raided the al-Maqassed Hospital in East Jerusalem, as well as other Palestinian clinics in the city, seeking information on patients injured by security forces, according to medical officials. One such incident led to a standoff between hospital staff and forces, who resorted to tear gas and rubber bullets.

The most recent tide of violence in the region, which began one month ago, has left more than seventy Palestinians dead, along with 12 Israelis, mostly the victims of stabbing attacks.