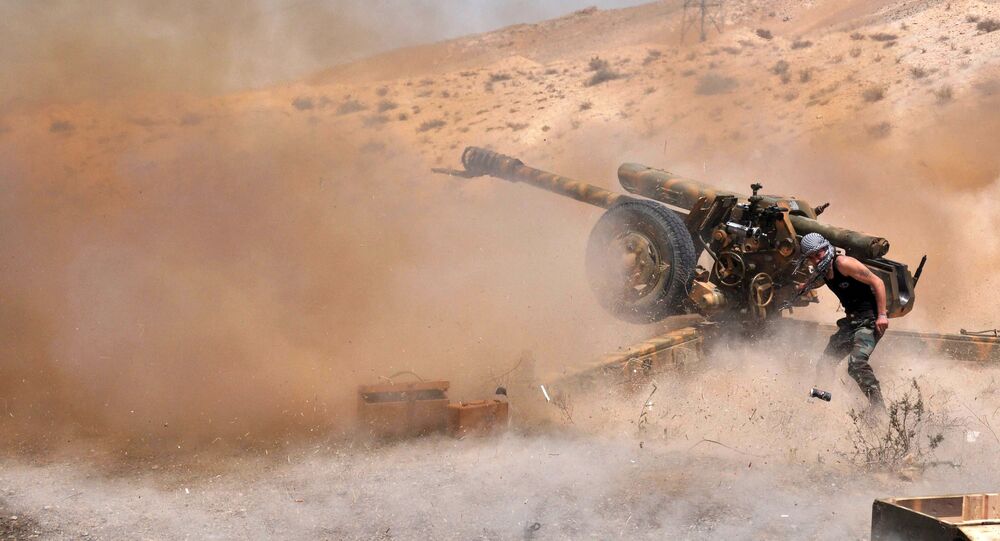 The Syrian Arab Army (SAA) assisted by Russian warplanes is slowly advancing towards the city of Palmyra, home to priceless Roman-era ruins partially destroyed by ISIL fighters; but it is too early to speak of victory, a RIA Novosti correspondent reported.

Damascus-led forces seem not to be in a hurry to retake Palmyra, probably the most famous archeological and historic site in Syria. They are mostly destroying ISIL manpower and occasionally take militant strongholds under control. Sometimes Russian Mil Mi-24P attack helicopters provide aerial support.

"Syrian aircraft are easily detectable in the sky and militants have time to hide. Russian warplanes launch attacks from higher altitudes since they are equipped with cutting-edge sighting and guidance systems. They also use guided bombs," a Syrian officer told RIA Novosti, adding that Russian planes are not visible from the ground, meaning they have an advantage of attacking anytime and anywhere.

Interestingly, the Syrian opposition, which is fighting against ISIL and al-Nusra Front, provided coordinates for some of the targets, Chief of the Main Operational Directorate of the General Staff of the Russian Armed Forces Andrei Kartapolov said.

These "patriotic forces," according to the high-ranking official, have been engaged in a months-long fight against government forces but they view unified, sovereign and free Syria as a true priority.

© AP Photo / Islamic State social media account via AP, File
This undated photo released Tuesday, Aug. 25, 2015, file photo, on a social media site used by Islamic State militants, which has been verified and is consistent with other AP reporting, shows smoke from the detonation of the 2,000-year-old temple of Baalshamin in Syria's ancient caravan city of Palmyra

Currently, the Syrian Army is some 20 kilometers (12.4 miles) away from Palmyra but this area is dotted with ISIL strongholds. Militants took the ancient city under control in May strengthening their positions in the region in the six months that followed. In addition, they killed hundreds of captured soldiers and local residents, as well as destroyed two ancient temples, an arch and funerary towers.

© AFP 2021 / GEORGE OURFALIAN
With Russia's Aerial Assistance, Syrian Army Lifts Aleppo Siege
Syrian troops will likely launch an offensive when ISIL is significantly weakened but it is too early to say when this might happen.

The Syrian Army ousted militants from strongholds to the east of Sadad, a town located 101 kilometers (63 miles) from the Syrian capital of Damascus. Two years ago al-Nusra Front fighters reduced the settlement to a bloodbath.

In the neighboring town of al-Qaryatayn, some 95 locals who were fighting for radical groups agreed to lay down arms and return to peaceful life, Syrian National Reconciliation Minister Ali Haidar said.

1 / 3
© AFP 2021 / JOSEPH EID
A file picture taken on March 14, 2014 shows a partial view of the ancient oasis city of Palmyra, 215 kilometres northeast of Damascus. Islamic State group fighters advanced to the gates of ancient Palmyra on May 14, 2015

What makes Palmyra particularly import is its location. The city served as a crossroads of several civilizations in ancient times. Centuries later, it remains a city of strategic importance.

"Take a look at the map and you'll see why Palmyra is important. It is not only about the statues. Syria is in fact a desert, coastal areas and several 'crossroads' which connect all of it. One does not have to control all the territory – only the roads and 'crossroads,'" military and defense expert Dmitry Evstafiev explained.

From this point of view, in the last 18 months, militants followed a smart strategy, the analyst noted. The SAA will be successful if takes "crossroads" under control, especially Palmyra.

Fighting in Ruins for the Future: Syrian Soldiers on Battlefield in Palmyra