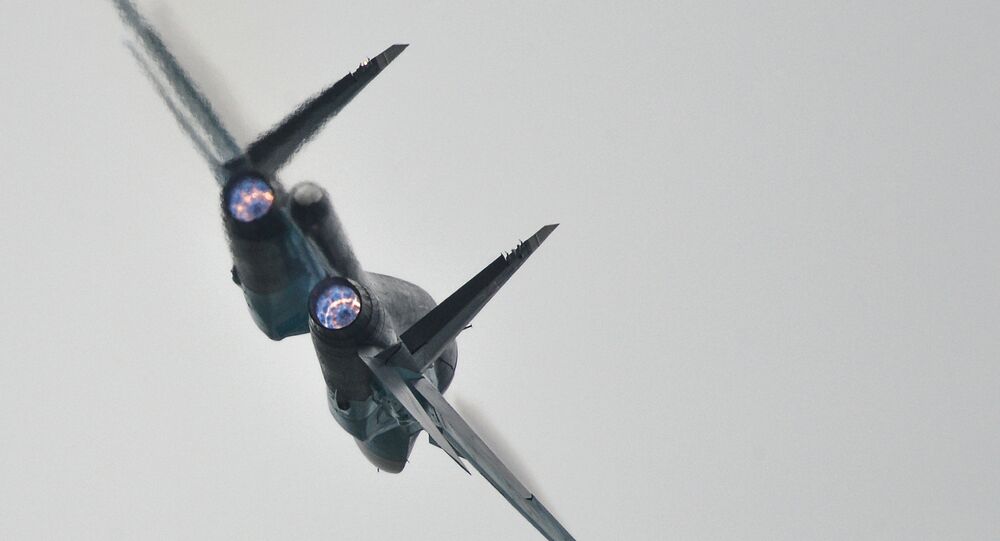 “Over the past 48 hours planes from the Russian aviation group in Syria have completed 85 military sorties against 277 targets in the provinces of Aleppo, Damascus, Latakia, Hama, Homs and Idlib,” Maj. Gen. Igor Konashenkov told journalists.

© AFP 2021 / GEORGE OURFALIAN
Syrian Army Breaks 2-Year ISIL Siege of Airbase in Aleppo
The Syrian Armed Forces have broken an ISIL siege of the Kweiris airbase in the Aleppo province on Tuesday with the assistance of the Russian aviation, the Russian Defense Ministry spokesman said Wednesday.

He added that data on the location of terrorist artillery positions and strongholds encircling the airbase had been received from representatives of the Syrian opposition and confirmed by the Information Center in Baghdad.

#SYRIA Coordinates of terrorists, who surrounded #Kwaires, were received from the Syrian opposition and confirmed by Info centre in #Baghdad

"As a result of the Russian aviation's actions, the Syrian government forces liberated the Kweiris military airbase in the province of Aleppo. This airbase had been surrounded by ISIL terrorists for more than two years."

"Near the village of Mahin in the province of Homs, a Su-34 bomber destroyed a major Nusra Front underground ammunition depot. Data on the location of this object had been received from the Syrian opposition."

© Photo : Russian Defense Ministry
Russian Warplanes Use Bunker Buster Bombs in Airstrikes Against ISIL Targets in Syria
After checking the information, the target was hit and completely destroyed by a BETAB-500 bunker buster bomb.

A Su-24M destroyed a Nusra Front mortar battery in the Syrian province of Hama, Konashenkov said.

Pinpoint strikes carried out by Russian military aircraft over the past 48 hours have thwarted terrorists' plans to launch an offensive in Syria's Hama, the Russian general said.

"According to data shared by the Syrian opposition and confirmed by the Syrian government forces' command, terrorists' plans to launch an offensive on the city of Hama from several directions have been thwarted thanks to Russian pinpoint strikes over the past 48 hours. This information was confimed by our unmanned aerial vehicles."

He added that terrorist groups instead of fighting attempt to errect defensive barriers and lay minefields to stop the Syrian government troops.

© AFP 2021 / BARAA AL-HALABI
Syrian Army on Offensive Near Aleppo, Large Number of Terrorists Killed
Konashenkov said that the Syrian government troops had defeated 7 terrorist groups (900 militants in total) due to the Russian aviation's assistance. He added that local population in the province of Aleppo were supporting the Syrian Armed Forces.

"Near the village of Tall Mamu fierce clashes erupted between local residents and Ahrar ash-Sham militants in which terrorists have suffered heavy losses."

Konashenkov said that Russia "managed to prevent the transfer of arms and ammunition to terrorists near Aleppo and Idlib." This allowed the Syrian government troops to defeat seven terrorist groups, who lost their fighting capacity and fled the combat areas.

Moreover, the Russian Aerospace Forces have destroyed an ISIL ammunition depot and four off-road vehicles of terrorists in the Damascus province. In the Homs province, Russian Su-24M aircraft destroyed three ISIL tanks and two infantry fighting vehicles, according to the spokesman.

#SYRIA 45 km to the south of #Tadmor, a strike was made against an #ISIS concentration of armoured vehicles. 3 tanks and 2 #IFV's destroyed

On September 30, Russia launched an air campaign in Syria at the request of President Bashar Assad targeting terrorist positions with precision airstrikes. The operation has been coordinated with the Syrian army.