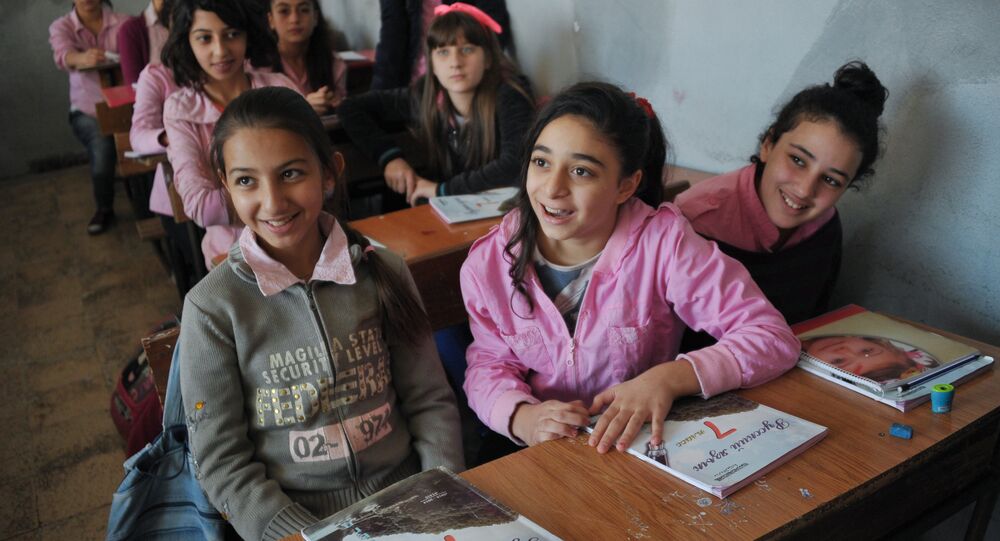 Grateful for Russia's support in the fight against the jihadists, Syrians are now flocking to learn Russian, RIA Novosti reports.

© AFP 2021 / LOUAI BESHARA
Break of Dawn: Damascus Residents Feel Optimistic After Russian Airstrikes
With a second foreign language compulsory for study in Syrian schools, RIA Novosti has found that Russian, introduced as an option in some parts of the country a year ago, is quickly gaining popularity, especially in the coastal province of Latakia, where the Russian military contingent assigned to assist the Syrian armed forces is based.

The country's school system, with 11 grades plus a 12th grade for those wishing to go to college or university, features mandatory English-language instruction in the first seven grades. From seventh grade on, the children choose a second foreign language.

Until recently, most chose French; Syria has a historical connection with France, having served as its colony for much of the first half of the 20th century following the collapse of the Ottoman Empire in the First World War. Since last year, young Syrians now have the choice of choosing Russian instead.

Many have, especially in the country's northwest province of Latakia, home to the Russian airbase at Hmeymim. Mohammed Kazak, the Head of the Department of Education of the Latakia Governate, told RIA Novosti that "from September of this year, about 4,500 students have chosen to study Russian in our province."

According to the official, Russian has become particularly popular in the city of Latakia itself, as well Jableh, a city in the province's south.

Paying a visit to a girl's school in the center of Latakia City, a correspondent from RIA Novosti took a moment to point out that no one has been able to escape the realities of war, not even the children. "Happy kids run through the school's corridors, but the situation in the country cannot be hidden; the old walls are decorated with posters explaining the various types of mines and shells. The posters forbid children from touching suspicious objects, so as not to cause them to detonate," the correspondent noted.

Azhfan Youssef, the headmistress of the school, explained that of the 846 pupils who study here, 38 have chosen to study Russian. By comparison, 60 are currently studying French. "At the moment, Russian is being studied only in seventh grade, accordingly, their total share remains small. However, next year, these girls will go on to eighth grade, and new pupils will come into the seventh, and so the number of students studying Russian will grow," Youssef noted.

A little girl named Meis decided to learn Russian because her mother comes from Donetsk. "I know how to speak Russian; we speak Russian at home," she slowly told RIA Novosti's correspondent. She wants to learn Russian, and when she grows up, dreams of becoming a doctor.

Her classmate Lucien chose Russian "because his parents decided I should." Her teacher, Gayfa Ihsan, explained that "it will be useful in her life, because relations between our countries are very strong." The educator noted that the children are pressing on, despite the fact that they have to learn some new sounds and pronunciations they've never known before, including the letter 'V' [Russian 'B']. "We don't have the letter v. Even now, when I say 'bukva' [letter], I pronounce it 'bukfa'," she noted.

© Sputnik
Girl at a whiteboard doing her best to master the challenging Russian Cyrillic script.

The demand for Russian has given rise to a demand for those who can teach it. In Latakia, they are taught at Tishreen University's Institute of Foreign Languages.

Dr. Avras Othman, the dean of the institute, told RIA Novosti directly that the growing interest in Russian is associated with the Russian contingent at the Latakia base.

"Our people are grateful for Russia's help in the fight against the terrorists. They are proud of our friendship with this powerful country. They see good prospects in studying this language, after which they can continue their studies in Russia and learn to be an engineer or a doctor. And they will be able to just meet a Russian officer and tell him 'thank you'," Orthman said.

© AP Photo / Kerstin Joensson
800,000 Refugees Returning to Syria Thanks to Russia
According to the dean, while only about 80 people chose to major Russian at the university last year, this year 619 people have chosen it as their specialty.

Jamil, a student who aspires to be an engineer, explained that he hopes that "Russian will help me in pursuing my goal." Earlier, his father had studied and worked in the former Yugoslavia. This, in Jamil's words, was another factor in his decision. "Slavs are very compassionate and kind people. My father will help me study the language," Jamil noted. Serbo-Croation and Russian share similarities.

Elena, a Russian woman from Irkutsk, Siberia who has lived in Syria for about 20 years after marrying a Syrian man, explained that demand for her services has gone through the roof. "I teach at the university, in schools, and give private lessons," she noted, adding that among her Russian friends, the demand for teaching Russian has gone up considerably, particularly in Latakia.

"Many students say directly: we want to learn Russian to say 'spasibo' to the Russian pilots, if they were to ever meet them on the street," Elena noted. "And so they ask me: how do you say 'we are very happy that you are here'? Or they say that they are just interested in learning the language of the people who flew in to help us."

Elena explained that "Arab students are very talented. They have a special aptitude for languages. They grasp things on the fly. This explains why so many of them know more than one language. For example, ethnic minorities know not only Arabic, but also their native Kurdish or Armenian. Many speak English, and also French or Turkish."

Now for some Syrians, it seems that Russian will be added to this eclectic mix.