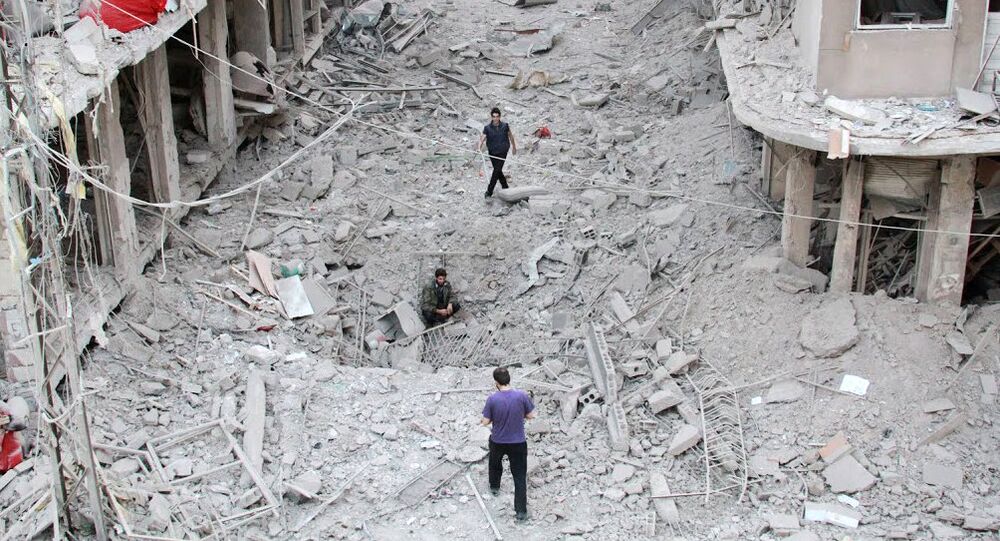 BBC reports on the aftermath of an attack on a school in Syria in 2013 were largely, if not entirely, staged, according to British blogger and publicist Robert Stuart.

© AFP 2021 / LOUAI BESHARA
Syrian People Should Decide on Their Leadership - UN Envoy
According to reports, the Syrian government dropped a flammable napalm bomb on a school in Syrian village of Urm Al-Kubra, near Aleppo.

Later the BBC aired a documentary called “Saving Syria’s Children” as well as several other reports about the consequences of the attack. Video footage included scenes from the hospital in Aleppo, where the victims supposedly underwent treatment, and interviews with them.

The use of napalm bombs against civilians has been one of the main accusations that Western countries have brought against Syrian incumbent President Bashar al-Assad.

They used it as a justification for their continuous calls for regime change in the country.

However, Stuart, who has been investigating the case for almost two years, points out at many contradictory accounts of the victims as well as other discrepancies. He spoke to Sputnik in an exclusive interview.

“There were a few things that made me want to investigate this report and the more I looked the more I found out. I think it is staged as there are a number of inconsistencies in the whole event. One of them is that no one can agree when exactly this incident actually happened.”

He further said, “Different people said that it happened at different times, some said in the day some said in the evening, they all contradict each other. Looking at YouTube video there are a number of discrepancies one of them is that in the video a woman appears who is wearing a very distinct dress and a headscarf. The same dress then appears on another victim now in the hospital shot in an amateur video. It is quite bizarre as two people are wearing the same dress.”

There is a local Syrian investigation team that has been looking at this matter and according to a person from this team he said that he was there at the time of the alleged attack and there was no attack on the school.

“I was contacted by a woman in Amsterdam who traveled to Syria and she asked me not to post these photographs that I was posting on Facebook as she was worried of being identified in them as she is quite a distinctive looking woman.”

Talking about other reports that may have been falsified regarding the Middle East and Syria, Stuart said that this case according to him is unique because, “actors or volunteers have been used to stage an atrocity for the cameras or propaganda purposes.”

He said that this could be a case of ‘manufacturing consent’ to allow British people to see what is going on Syria and permit the British soldiers to go to war. “BBC is blocking all videos of this footage on YouTube and any frame that appears is immediately taken down.”

He then goes on to say what the public and journalists can do in order to get the real story behind this allegedly fabricated video.