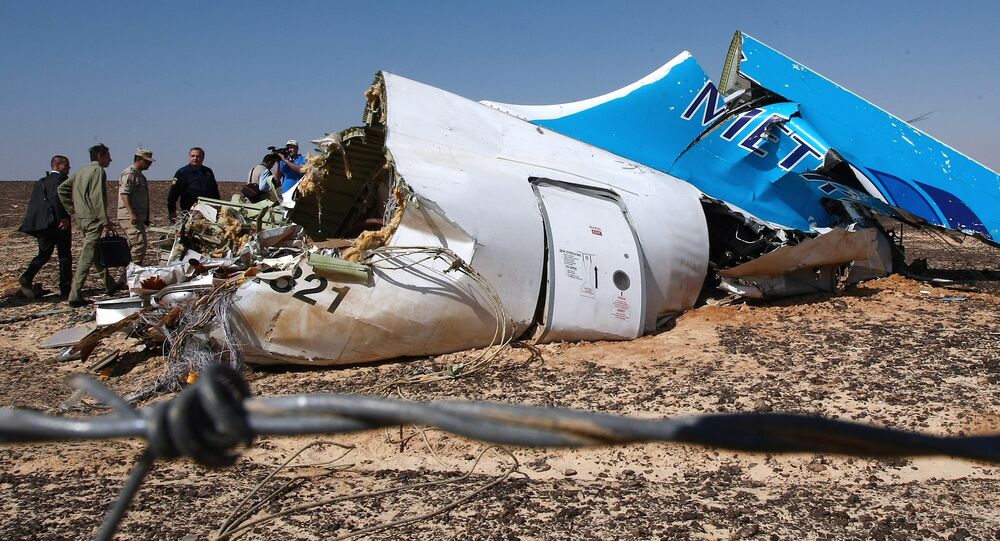 Following the tragic crash of the Kogalymavia flight 9268 that killed all 224 people on board, a number of theories explaining a possible cause of the accident have appeared. For your convenience, Sputnik compiled the list of the most common possible causes which could have led to the catastrophe.

On Monday, Kremlin spokesperson Dmitry Peskov said that it won't be possible to formulate an official reason of the Airbus A321 crash until the ongoing investigation into the accident is concluded. Meanwhile Egyptian President Abdel Fattah Sisi said the probe, conducted by the Interstate Aviation Committee (IAC), might take months to come up with an official conclusion.

Nonetheless, a number of versions why and how the plane crashed have already appeared in media. Here are some possible explanations of how the tragedy may have unfolded.

After the accident ISIL claimed responsibility for the crash on Twitter.

© REUTERS / Kim Philipp Piskol
Russian Transport Minister Denies Terrorist Involvement in Russian Airbus Crash
However, experts were quick to reject the claim stating that the terrorists couldn't have attacked the plane simply because the Airbus was flying well above a firing range of any man portable air defense system.

Nonetheless, speculations that the plane crash happened as the result of a terrorist attack are present, especially since the Russian airliner broke up in the air, according to Egyptian authorities.

"It's [ISIL shooting down the plane] unlikely, but I wouldn't rule it out," said James Clapper at the Defense One Summit in Washington, as cited by CBS News.

The prestigious US global intelligence company Stratfor speculated that a bomb explosion on board of the Airbus A321 could have been the possible cause of the accident.

"It seems that the most possible explanation for the downed plane is the existence of an explosive device onboard," Stratford said, thus rejecting the version of missile attack from the ground.

Someone could have carried an explosive device into the aircraft or loaded a bomb into the cargo hold. Security personnel often accept bribes in exchange for allowing passengers to avoid checkpoints while cargo security screenings are less strict than those in the United States and Europe, Stratfor said.

© Sputnik / Maxim Grigoryev
On Board Explosion Might Be Cause of Russian A321 Crash - Stratfor
If this is the case, the catastrophe in Sinai is reminiscent of the crash of Pan American Flight 103 near Lockerbie, Scotland in 1988. Following the accident, investigators gathered the parts of the Pan Am Boeing 747 and discovered a small hole in the fuselage of the plane which had curved outward-looking edges. The hole was caused by the explosion of a small bomb  hidden in a suitcase. Later, a Libyan man was identified as the terrorist who loaded the suitcase onto the plane and was sentenced to life imprisonment.

An explosion itself can't destroy the plane the size of the Airbus A321, but similar to the Pan Am Boeing 747, the bomb explosion could have caused depressurization due to the sudden drop of pressure and quickly led to the disintegration of the plane in the air.

So far, the ongoing investigation hasn't found any traces of explosive devices among the debris scattered around at the site of the crash in Sinai, a source close to the investigation told RIA Novosti.

© Sputnik / Michael Alaeddin
Kremlin: Reason of Russian Airliner Crash in Egypt Cannot Be Officially Proposed
After visiting the crash site of the Airbus A321 in Sinai some experts compared it to the crash site of a catastrophe that took place near Cherkessk, Russia in March of 1997. Similar to the Kogalymavia-owned airbus, the Antonov An-24 also broke up into pieces while flying at an altitude of 6 km (around 20,000 feet) due to corrosion that occurred after the plane had flown in Africa, Russian newspaper Kommersant said.

Previous Damage to the Tail of the Plane

Another version related to a technical failure of the plane is born out of the fact that the Airbus A321 struck its tail on a runaway during an unsuccessful landing in 2001. After the incident, the aircraft was checked and after all its defects were repaired it was re-commissioned and allowed to go back in the skies. However, the damage to its tail during that incident or inadequate repair could have caused the crash in Egypt.

"Old metal parts, old aircraft that was already damaged. In this case, the plane touched the ground with its tail during a landing in 2001," Andrei Litvinov, a 1st class pilot who received the Honor of Excellence working for Russia's flag carrier Aeroflot, told Kommersant.

Sloppy technical procedures in the company could have led to mistakes in the repair process of the plane. It was reported that Kogalymavia apparently hadn't paid salaries to its employees for two months which could also mean that the company might have ignored some maintenance issues in the past, Litvinov said, according to Kommersant.

Investigation Committee Holds Meeting on A321 Crash Site in Egypt