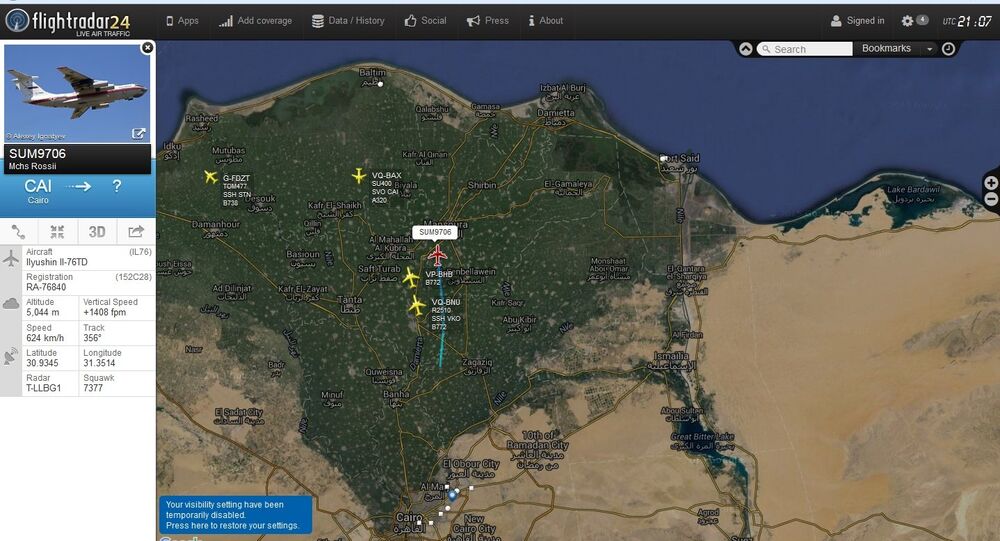 The first plane with the bodies of Airbus-A321 crash victims left Egypt for St. Petersburg.

A Russian Emergencies Ministry airlifter with the bodies of flight 2968 victims has set off toward St. Petersburg, Russia from the airport in the Egyptian capital of Cairo, the ministry’s press service said Sunday.

"EMERCOM Il-76 aircraft has taken off from Cairo to St. Petersburg. The bodies of those killed are on board," the press service said, specifying that the plane departed at 20:45 GMT.

The Russian Emergencies Ministry aircraft with the bodies of 144 out of 224 victims of the Kogalymavia airliner was to depart toward Russia at 20:30 GMT, Deputy Minister Vladimir Stepanov said Sunday.

Another ministry representative said the bodies of the victims were loaded onto the Il-76 (NATO reporting name Candid) airlifter, adding that the expected arrival time in St. Petersburg is 02:00 GMT.

Over 200 DNA samples have been gathered among the victims’ relatives to identify the bodies. The Russian Health Ministry said earlier all preparatory works for the identification process have been completed.

The Kogalymavia aircraft crashed in the northern Sinai Peninsula early Saturday shortly after takeoff from the Sharm El-Sheikh resort to St. Petersburg, killing all 224 people on board.

A Kogalymavia official Alexander Smirnov has earlier said that engine failure would not lead to the crash of the airplane.

A321 Black Boxes Appear to Have Minor Damage