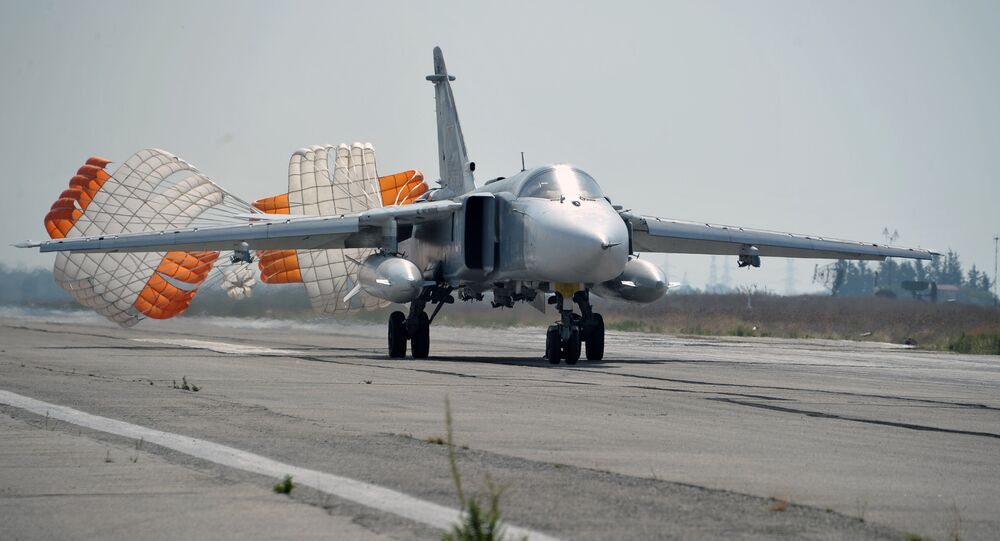 The Russian air group in Syria has carried out 1,391 sorties over the past month, the General Staff said Friday.

Since the beginning of its operation in Syria on September 30, Russian Aerospace Forces have carried out 1,391 sorties in Syria, destroying a total of 1,623 terrorist targets, the Russian General Staff said Friday.

Kartapolov added that Islamic State has retained positions in a number of areas, having turned them into fortified zones complete with underground tunnels and shelters.

"It is too early to speak about complete victory over terrorists in Syria. Despite heavy losses and mass desertion, militants continue to resist the government troops. Importantly, the Syrian armed forces have promptly repelled all of their counterattacks," Kartapolov said.

According to him, militants in Syria are trying to redeploy forces from Iraq and other neighboring states, but their morale and training levels are very low.

© Flickr / kuhnmi
Russian Airstrikes in Syria Payment For Mistakes of Others - Lawmaker
Kartapolov said that leaders of the Jabhat al-Nusra terrorist group operating in the Syrian province of Hama have decided to join forces with ISIL as the Syrian army continues its offensive.

At the same time, militants often attempt to save their lives when being trapped by government forces by claiming that they belong to the so called ‘moderate opposition', and their cowardice and unwillingness to fight causes the militant leaders to stop paying them.

"In order to receive political and financial support from abroad, the leaders of a number of militant factions that used to be a part of the Jabhat an-Nusra terrorist group decided to switch allegiance and to defect to the Harakat Ahrar ash-Sham which is considered to be a ‘moderate opposition' group by the West," he concluded.

"In Hanshih, a suburb of Damascus, 17 militants of the Al-Ghuraba group were executed in public after they tried to leave the combat area and flee to Jordan," he specified. "The whole scene was filmed in order to disseminate the footage among the other groups operating in the vicinity of Damascus and other areas", the General Staff spokesman said.

© Sputnik / Dmitriy Vinogradov
Why Are They Calling for Russia, and Not France, Asks Ex-Premier Fillon
In addition, he said that all information on IS, as well as al-Nusra Front positions provided by Syria's moderate opposition "will be studied, and the objects themselves will be priority targets for Russian aviation."

In the central regions of the country, the Syrian Army managed to liberate 12 cities in the Hama province, Kartapolov said. "The Syrian armed forces continue their advance to the north," the general added.

He also said that in the Homs province, government troops and local militia forces managed to seize control of the town of Snisel and completely surround a large number of enemy forces holding Ad-Dar al-Kabira, Sem-Ali and Teir-Maala.

"Heavy fighting continues in the Eastern Ghuta district of Damascus. Significant gains were made in the vicinity of Duma and Hula. The government forces continue their advance in the direction of Jubar, attempting to trap the militant forces deployed there," general said.

According to him, the Syrian Army liberated 19 settlements on the vicinity of Aleppo. "The government forces have repulsed all of the counterattacks launched by the militants, and continue to advance on Kuweires," Kartapolov said.

© Flickr / JBLM PAO
US to Deploy up to 50 Advisors to Syria
He also remarked that in the Latakia province the militants were dislodged from nine settlements. "Assault squads are fighting a ferocious battle on a flat terrain to gain control of the town of Salmia," general said.

"Bombing runs carried out by Russian aircraft allowed Syrian forces to go on offensive on the provinces of Aleppo, Latakia, Idlib, Homs and Damascus, and to liberate large swathes of territory."

#SYRIA #Kartapolov:It's early to talk about complete victory over terrorists,they continue resisting the governmental forces in some regions

"During the three weeks of intensive fighting, the Syrian Army liberated over 50 large settlements and about 350 square kilometers of territory," Kartapolov said.

According to the general, residents started to return to some of the settlements.

"The situation in Syria drastically changed thanks to Russian airstrikes. The terrorists suffered heavy losses, and the system of control and supply of the militant groups that was created over the course of the last few years was disrupted," Kartapolov noted.

"ISIL and Jabhat an-Nusra lost the initiative and had to go on the defensive on every front. At the same time the enemy chain of command was also severely undermined, in no small part due to the elimination of 28 of the most notorious militant leaders," Kartapolov said.

Russian Defense Ministry
There Is No Evidence That Russia Hit Our Hospitals – MSF Rejects US Claims
"We've already declared on several occasions that we are willing to cooperate with all Syrian groups, including the Free Syrian Army, fighting against the ISIL and Jabhat an-Nusra. We're open to all forms of cooperation with the patriotic opposition, including the framework of the Joint Information Center in Baghdad," he said.

All information on ISIL and Jabhat an-Nusra targets provided by the Free Syrian Army and other moderate groups “will be reviewed and the targets themselves will become priority targets for Russian military aircraft,” Kartapolov added.

"Despite the fact that the General Headquarters keeps fully and efficiently informing the public about the activities of the Russian military aircraft activity in the Syrian Arab Republic, the Western media keep publishing fake stories about the allegedly indiscriminate nature of the airstrikes conducted by our forces," Kartapolov said.

One such hoax regarding the Omar Ibn Al Khattab Al Farooq mosque that was allegedly destroyed by Russian airstrike in Jisr al-Shughour in Idlib province is completely false, he added.

"Today we show you the real situation there. On the screen you can see the aerial photographs of that very mosque, taken by our planes yesterday, on October 29. As you can see, the mosque did not sustain any damage," the general told journalists.

Kartapolov also asked the Western partners who accuse Russia of carrying out indiscriminate airstrikes in Syria to back up their accusations with concrete evidence.

"The Russian Defense Ministry is well aware of how many surveillance planes and reconnaissance spacecraft are constantly monitoring the Russian military activity in Syria. So if the military departments of NATO member-states and other countries wish to accuse us of anything, they have everything they need to present concrete evidence, just like the Russian Defense Ministry does," he said.