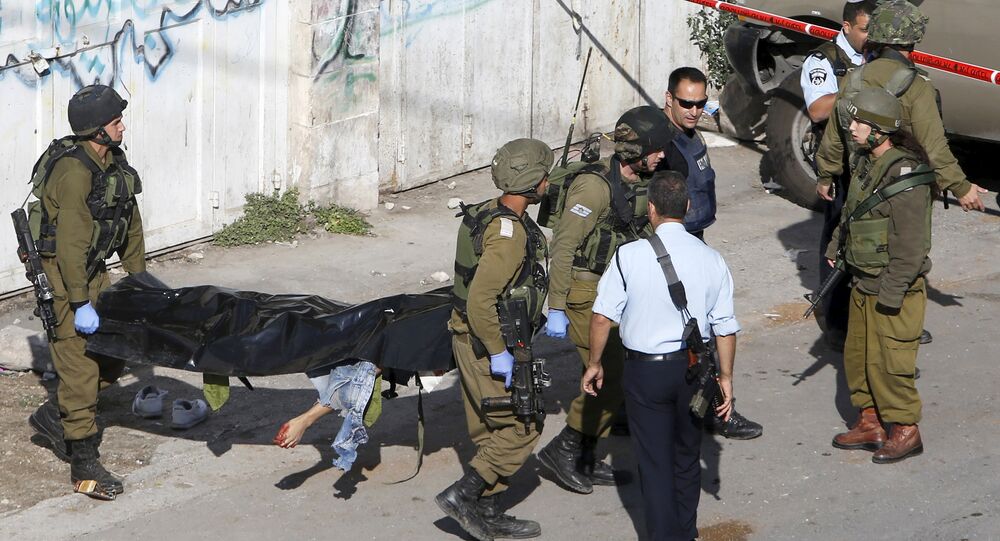 A Palestinian who stabbed an Israeli soldier in the West Bank was shot dead, according to the Israel Defense Forces (IDF).

© REUTERS / Ammar Awad
Palestinian Minor Killed by Police After Stabbing Teenager in Jerusalem
TEL AVIV (Sputnik) — A Palestinian was shot dead after attacking on an Israeli soldier in the West Bank, the Israel Defense Forces (IDF) said in a statement Thursday.

"A short time ago, an IDF soldier was stabbed near the Cave of Patriarchs. The soldier was lightly wounded and the first aid was given. The terrorist was shot," the statement reads.

The attack took place in the city of Hebron and became the eighth such attack this month. According to the local media, an Israeli paramilitary policeman shot the Palestinian at the site, killing him.

Palestinian Woman Shot After Attempt to Stab Israeli Border Guard
As a result of the latest outburst of violence in the Israeli-Palestinian conflict, over 50 Palestinians have been shot dead by the Israeli security forces while 11 Israelis have been killed in attacks by Palestinians.

The Cave of Patriarchs, located in Hebron, is a holy place for Jews and Muslims. It is believed that the first patriarch of the Jews and Arabs, Abraham, his son Isaac and grandson, Jacob, are buried in the cave.

Hebron is located in the disputed West Bank, not far from Jerusalem, which is at the center of the current outbreak of violence, mostly involving stabbings.