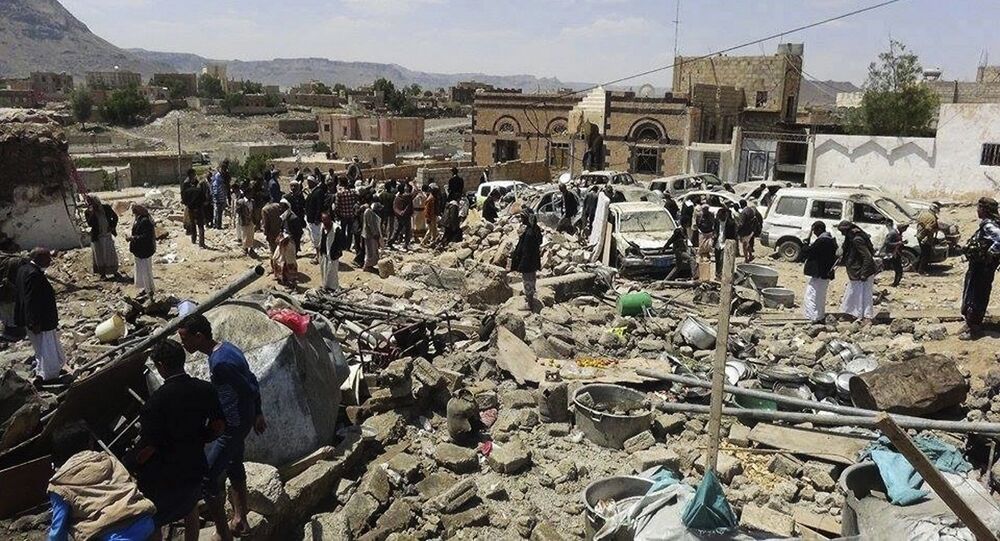 Civilian casualties of the Saudi-led bombing in Yemen have reached 6,318, according to the local health ministry.

© REUTERS / Saudi Press Agency/Handout via Reuters
MSF to Demand Explanations From Saudi Coalition for Yemeni Hospital Bombing
CAIRO (Sputnik) — Over 1,000 children have been killed since the start of the Saudi-led military intervention in Yemen, spokesman for the country's Health Ministry Tamim Shami said Wednesday.

"Civilian casualties since the beginning of the bombing have reached 6,318, among them are 1,241 children, 1,028 women," Shami told RIA Novosti.

"Devastating airstrikes were carried out against 109 hospitals, 229 healthcare centers, as well as 56 ambulances," he added.

According to the spokesman, over 15,000 civilians have been wounded since the beginning of the conflict. The northern Saada governorate and Yemen's capital, Sanaa, have the highest number of victims.

© REUTERS / Saudi Press Agency/Handout via Reuters
MSF Shared Coordinates of Bombed Hospital in Yemen With Saudi Coalition
There is now a major shortage of medicines and medical instruments in the country, according to Shami. Though humanitarian aid is being provided through the World Health Organization, "this is not enough to treat the number of people injured in the bombings," he said.

The recent airstrikes against a Doctors Without Borders hospital in Yemen's northern Saada region have claimed lives, the spokesman said.

"There are wounded and killed as a result of the bombing of this hospital, though numbers are being clarified," Tamim Shami told RIA Novosti.

On Monday, a hospital of the medical aid group Medecins sans Frontieres (Doctors Without Borders, or MSF) in Saada was bombed while staff and patients were inside the building. The MSF believes the coalition is responsible for the incident. The Saudi-led coalition has denied the reports.