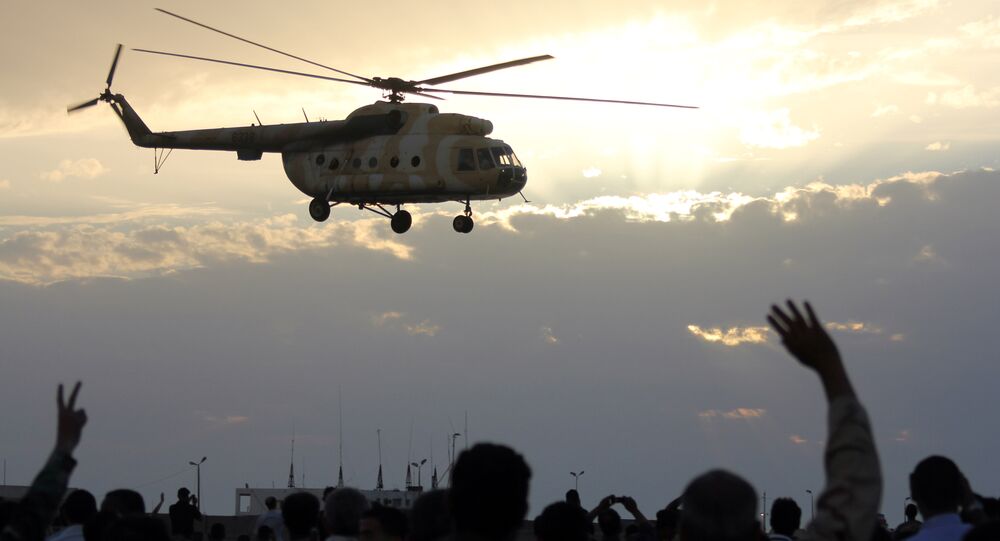 Lawless Libya: Western Governments Will Be Forced to Look Back

Further violence has erupted in Libya after a helicopter carrying Islamist military commanders was shot down by rival armed factions. All 19 passengers on board died, triggering clashes between Libya Dawn, an Islamist group of the coalition forces that runs Tripoli and a rival tribe known as Warshefana.

The North African country is gripped in a civil war between the internationally recognized Libyan government, forced to operate from Tobruk on the eastern border with Egypt and its rival self-styled government in Tripoli, which is run by Libya Dawn, the dominant Islamist group of a coalition of forces.

Reports of a #helicopter MI8 down in #Libya. Belongs "Dawn of Libya" West of Tripoli. Breaking @BlogsofWar pic.twitter.com/mvp1x8fOGe

Libya Dawn has blamed the attack on rival forces loyal to the official Libyan army and pointed the finger at the "so-called Tribes Army, allies with the remnants of the [Gaddafi] regime."

But the Warshefana tribe has denied any involvement in the attack. In a statement, the Al-Maya Municipality claimed it was the work of "agents of fitna [division]" who want to "cause strife between the tribes and destroy Libya's social tissue."

Corrupt officials seemingly operating based on tribal affiliations and self-interests are disrupting the fabric of Libyan society. According to the UN's Refugee Agency: "The current situation in Libya is characterized by a continued lack of rule of law and order, ongoing fighting between rival armed groups in many parts of the country and daily assassinations, bombings and kidnappings.

"Intense fighting between opposing armed groups over control of territory, resources and infrastructure since May 2014 has resulted in the death of thousands of people, including civilians, and led to the displacement of over 435,000 individuals, the destruction of vital infrastructure, disruption of basic services and deteriorating humanitarian conditions."

© REUTERS / Esam Omran Al-Fetori
Ex-UK Ambassador to Libya Admits Failures Leaving Country in Crisis
Meanwhile, Europe and the US are pushing for rival groups to form a unity government, recognized by the international community to try an end the chaotic and violent situation, which erupted following the 2011 military mission led by France and Britain to remove the country's leader, Colonel Gaddafi, from power.

But since the fall of Gaddafi, Libya is now, according to UN special envoy Berardino Leon, "on the verge of economic and financial collapse" and "facing a huge security threat because of civil war."

While the West has been accused of turning a blind eye on the chaos ensued, European Union leaders will be forced to look back at Libya while member states' navies carry out Operation Sophia — refugee search and rescue operations at sea.

"At some point, it will have to work within Libyan territory."

"ISIL has realized that the largest factions are more interested in fighting each other," Mattia Toaldo, Libya specialist at the European Council on Foreign Relations, told Reuters.

"It is expanding in central Libya, encountering little resistance".

Helicopter Crash Near Libyan Capital Kills All 25 People on Board