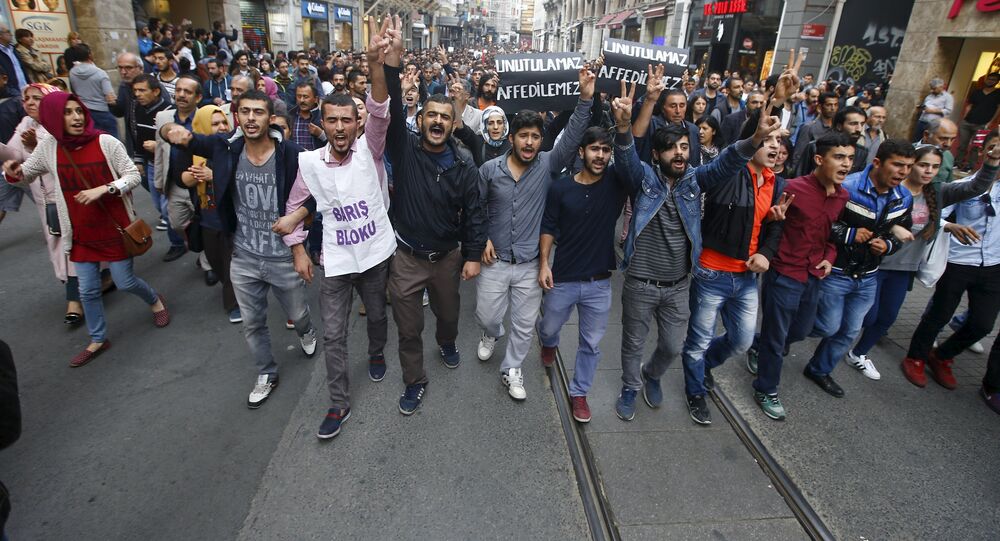 Turkey's government may slide into chaos if the country's political parties are unable to form a coalition following November's elections, the head of an Istanbul polling agency told Sputnik Turkiye.

Turkey's government will descend into chaos if the parties standing for election do not negotiate a coalition, the head of Turkey's Konda polling agency Tarhan Erdem told Sputnik Turkiye.

No single party has a clear majority in opinion polls for Turkey's upcoming November 1 parliamentary elections, and it may be impossible for a coalition to form because of the parties' polarized attitude toward each other, according to Erdem. Konda is one of Turkey's most authoritative yet secretive public opinion polling agencies.

"The country has literally approached a line, behind which is an abyss called an 'ungovernable state.' Responsibility for this lies on all participants of the political processes," Erdem told Sputnik Turkiye.

© REUTERS / Umit Bektas
Thousands Gather in Ankara to Mourn Deadly Blasts' Victims, Chant Anti-Gov't Slogans
The upcoming election was announced after Turkey's June 15 elections resulted in no clear majority or coalition. Opinion polls have not changed greatly since then, although Turkey's political climate has become increasingly polarized following terrorist attacks against political activists, including a peace rally bombing in Ankara on October 10, which killed 102 people.

Erdem added that Turkey's president has to gather the political parties' leaders following the elections to discuss strategies for governing the country. He noted that political players would have to stop searching for enemies and work toward an agreement for this to happen.

"Otherwise, if party leaders begin forming the government without agreeing to a further action program, Turkey is threatened with a descent into chaos, which may turn out to be much more serious than the tense atmosphere we see in the country now," Erdem added.

According to most recent opinion polls, President Recep Erdogan's AKP party is polling at slightly above 40 percent, and the party's sharp disagreements with the nationalist MHP and the secularist CHP may make it very difficult for them to form a ruling coalition.