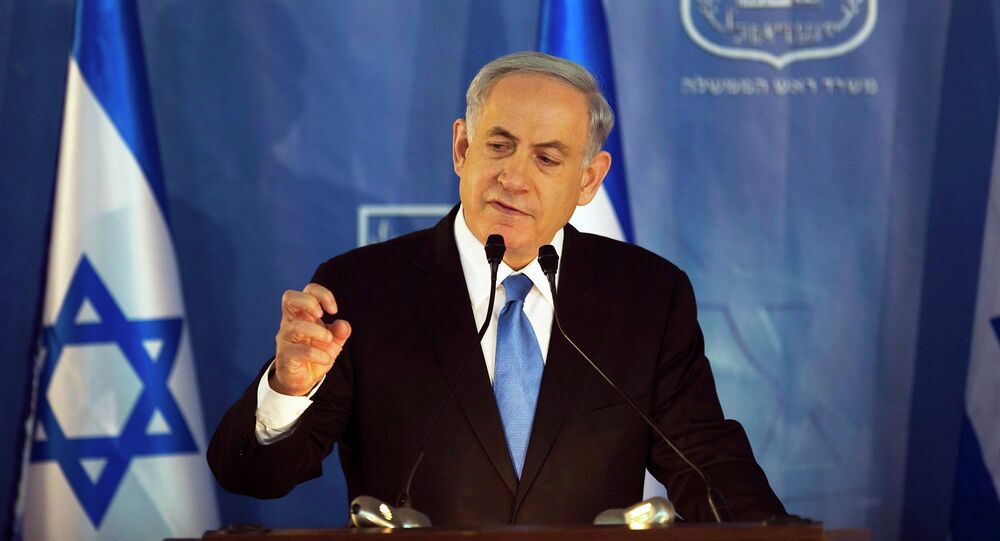 Israeli Prime Minister Benjamin Netanyahu has been slammed by historians, political leaders and activists alike for trying to rewrite history and absolve former Nazi leader Adolf Hitler of his atrocities, after the PM accused a former Palestinian leader of "inspiring the Holocaust."

Speaking at the World Zionist Congress in Jerusalem, Netanyahu said that Haj Amin al-Husseini, the Grand Mufti of Jerusalem, flew to Berlin and convinced Hitler to exterminate Jewish people.

"Hitler didn't want to exterminate the Jews at the time, he wanted to expel the Jews. And Haj Amin al-Husseini went to Hitler and said, 'If you expel them, they'll all come here [Palestine].' "

According to Netanyahu, Hitler then asked: "So what should I do with them?" to which the Mufti replied: "Burn them."

The comments came as Netanyahu accused Palestinians of using disputes over holy sites as a pretext to engaging in violence. The PM also said that:

"Other attacks on the Jewish community in 1920, 1921, 1929, were instigated by a call of the Mufti of Jerusalem Haj Amin al-Husseini, who was later sought for war crimes in the Nuremberg trials because he had a central role in fomenting the final solution."

Historians have condemned the comments as being factually incorrect, noting that while the Mufti did meet Hitler and was supportive of him, the encounter took place after the extermination of Jewish people had started.

Cartoon of the Day @netanyahu: Blame Palestinians For The #Holocaust! @MaxBlumenthal @Mondoweiss pic.twitter.com/yfDeVjKxpq

"You cannot say that it was the mufti who gave Hitler the idea to kill or burn Jews. It's not true. Their meeting occurred after a series of events that point to this."

Israeli opposition leader Isaac Herzog joined the condemnation of Netanyahu, accusing him of trivializing the Holocaust.

"This is a dangerous historical distortion and I demand Netanyahu correct it immediately as it minimizes the Holocaust, Nazism and… Hitler's part in our people's terrible disaster."

"A historian's son must be accurate about history," Herzog wrote on his Facebook page.

While condemning Netanyahu's comments, Herzog did add that al-Husseini "gave the order to kill my grandfather, Rabbi Herzog, and actively supported Hitler."

Netanyahu's comments unsurprisingly attracted widespread criticism from Palestinians, during a time of heightened tension and violence between the two groups.

Prominent Palestinian figure and former peace negotiator Saeb Erekat was among those who accused the Israeli leader of absolving Hitler.

"Netanyahu hates Palestinians so much that he is willing to absolve Hitler for the murder of 6 million Jews," Erekat said in a quote released on Twitter by the Palestine Liberation Organization (PLO).

"On behalf of the thousands of Palestinians that fought alongside the Allied Troops in defense of international justice, the State of Palestine denounces these morally indefensible and inflammatory statements."

There are concerns that Netanyahu's comments will only spur on more violence between Palestinians and Israelis, with a series of deadly attacks taking place over the past month.

Twenty-five Palestinians have been identified by Israel as attackers.