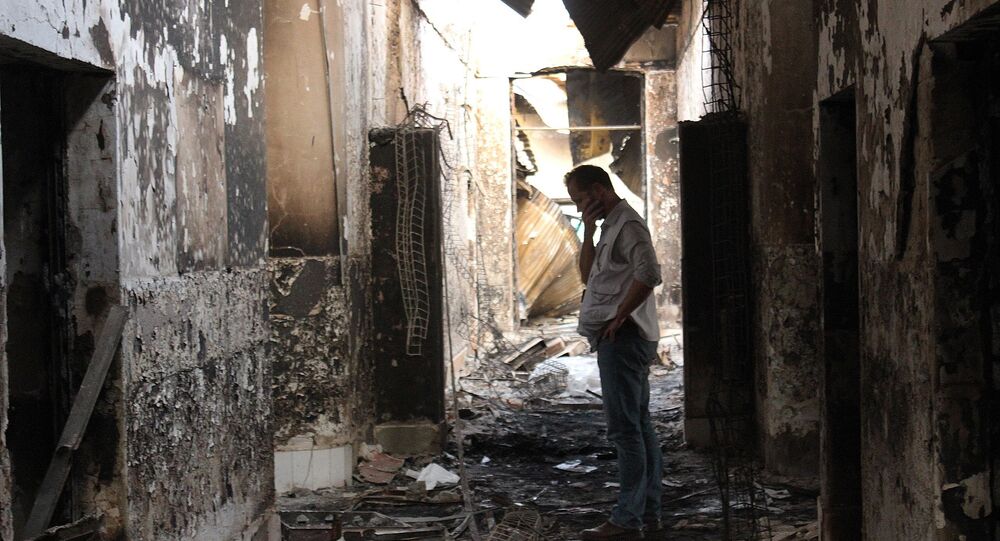 The head of medical charity Doctors Without Borders, whose hospital was destroyed in a US airstrike in Afghanistan earlier this month, has challenged Washington's official explanation for the attack, saying that he believed the bombing of the site wasn't a mistake and was in fact, deliberate.

Hitting back at claims from General John Campbell — the commander of NATO and US troops in Afghanistan — who said the hospital had been "mistakenly struck", Christopher Stokes, the General Director of MSF, said evidence suggested the attack was planned.

"The hospital was repeatedly hit both at the front and the rear and extensively destroyed and damaged, even though we have provided all the coordinates and all the right information to all the parties in the conflict," Stokes told Associated Press (AP).

"The extensive, quite precise destruction of this hospital… doesn't indicate a mistake. The hospital was repeatedly hit."

Officials from the charity, also known as Medecins Sans Frontieres (MSF), have said that the bombing attack lasted over an hour, leading to suggestions that it was the legitimate target of the US airstrike.

We all know what happened to the @MSF hospital in #Kunduz. To find out why, sign here: https://t.co/3KnDKrCCuH pic.twitter.com/1WIfGDroCk

Stokes also reiterated calls for an independent investigation into the incident to be carried out, saying that the charity wanted:

"…a clear explanation because all indications point to a grave breach of international humanitarian law, and therefore a war crime."

The charity has raised concerns over the joint NATO-US-Afghan probe into the attack, saying that officials couldn't be trusted to carry out a thorough and independent investigation into the incident.

© AP Photo / Médecins Sans Frontières via AP
The Doctors Without Borders hospital is seen in flames, after explosions in the northern Afghan city of Kunduz, Saturday, Oct. 3, 2015

The October 3 attack on the hospital in Kunduz, Afghanistan killed 22 people — 12 staff and 10 patients — with reports some victims were burning in their beds as a result of the bombing.

The US has taken responsibility for the attack, with President Barack Obama apologizing to MSF officials.

Despite the apology and claims that the hospital was "mistakenly" hit, there have been major question marks over how the site was bombed, with medical officials repeatedly maintaining that they had informed US and Afghan officials that the site was being used as a hospital.

MSF's claims have been backed up by media reports suggesting US forces were aware the facility was a hospital and had been monitoring the site for days leading up to the attack.

The Intensive Care Unit. Two weeks ago this was the heart of the @MSF hospital in #Kunduz #IndependentInvestigation pic.twitter.com/dAMN9KTdF8

According to a report by AP, a former intelligence official familiar with the details of the incident said that American analysts were scrutinizing the hospital before it was destroyed amid fears the site was being used a base for Taliban operatives.

US officials weren't aware of the media reports, while MSF General Director Christopher Stokes denied any suggestions that armed Taliban forces were present on the hospital site.

"The compound was not entered by Taliban soldiers with weapons.

"What we have understood from our staff and guards is that there was very strong, very good control of what was happening in and around the compound and they reported no firing in the hours preceding the destruction of the hospital," Stokes said.

The pressure is now building on United States officials, with accusations that the US is guilty of war crimes as a result of the incident.

Sign the petition! Tell @POTUS to consent to an #IndependentInvestigation of Kunduz bombing http://t.co/aRyC80oo4V pic.twitter.com/RqT760skld

Legal experts have said that if it can be proved that the US knew the site was being used as a hospital, then it could amount to war crimes.

MSF has already raised concerns around the current investigation into the attack, saying that there were fears the joint NATO-US-Afghan probe could have potentially destroyed vital evidence after entering the bombed hospital site last week.

The charity has launched an online petition calling on president Obama to allow the Swiss-based International Humanitarian Fact-Finding Commission (IHFFC) to carry out an investigation into the attack. However, the US has failed to grant the commission access to the hospital.

US to Unveil First Findings of Hospital Attack Probe Next Week

Some 7,000 Sign Petition to Hold Independent Inquiry Into Kunduz Attack

Why Is the US So Afraid of Probe Into 'Accidental' Kunduz Hospital Attack?