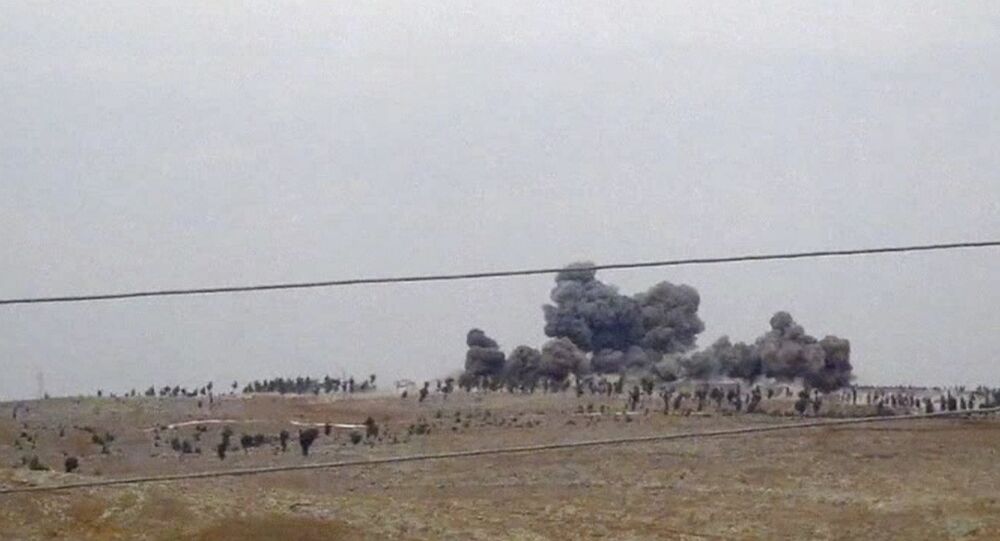 The Syrian conflict is not an isolated crisis but a part of the US' bigger plan aimed at Iran and beyond, Toni Cartalucci explains, pointing out that it is the Fortune 500 companies, centered on Wall Street and London, which are dragging the MENA region into chaos.

© Sputnik / Dmitriy Vinogradov
Battle Against ISIL: Russia Exposes US Lies in Syria
Western political analysts regard the "balkanization" of Syria as the only option to "solve" the ongoing Syrian crisis; indeed, weakened and fragmented Syria is considered a potential foothold to target Iran and other players in the region, Bangkok-based geopolitical researcher Tony Cartalucci underscores.

It is naïve to believe that Washington's proposals for a "political transition" or the partitioning of Syria will lead to peace and stability in the Middle East.

"It will not be the end of regional conflict, but rather the end of just the beginning.  The successful destruction of Syria will portend war with Iran and beyond," Cartalucci stresses in his recent article for New Eastern Outlook.

"In this signed and dated criminal conspiracy, methods for covertly overthrowing the Iranian government with US-backed mobs augmented with armed militants, the use of US listed foreign terrorist organizations to wage a proxy war against Iran, the provocation of open war with Iran, and the use of Israel to unilaterally attack Iran first, before bringing America inevitably into the war shortly after, are all described in great detail throughout the 156 page report," Cartalucci underscored.

© Sputnik / Mihail Metzel
Countries Fighting ISIL Should Follow the Lead of Russia – Iranian FM
The researcher pointed to the fact that US policy-makers had no scruples about removing the infamous terrorist organization Mujahedin-e Khalq (MEK) from the US State Department’s foreign terrorist organization list in 2012 in order to use it in Washington's covert war against Iran.

The ongoing conflict in Syria is just a part of a bigger game.

"Clearly the problem is larger than Syria, and even larger than the geopolitical chaos the US has created arcing over the MENA region," Cartalucci stressed, adding that the ongoing strife is fuelled by big-finance, big-defense, big-telecom and other representatives of global corporatocracy.

© Photo : Ministry of Defence
US Logic: 'Russians Are Bad Guys Because They Efficiently Fight Against ISIL'
It is the Fortune 500, centered on Wall Street and London, who are adding fuel to the fire in the Middle East, he noted.

In light of this, Moscow's efforts to "solve Syria" have acquired a new meaning.

In fact, Russia has upset Washington's plans and shifted the balance of power in the MENA region as a whole.

"Russia's decision to defend the sovereign government of Syria and assist in the elimination of Syria's enemies within its borders, as well as the warding off of its enemies beyond them is the most immediate course of action to 'solve Syria.' Inviting Iran and even China to take part in a larger campaign to secure Syria’s borders and assisting in the restoration of order within the country is a concrete next step. Expanding this coalition to cover Iraq next will create a geopolitical 'no-meddling-zone' the West will find itself outside of," the geopolitical researcher elaborated.

By its decision to step in in Syria Moscow has clearly demonstrated Russia's commitment to the concept of a multi-polar world. And a multi-polar world means a distribution of global power, global responsibility and wealth, he stressed.

"Solving Syria truly, means solving the problem presented to us by the prevailing unipolar order itself. It is not a battle simply for Syria and its allies to fight within the borders of Syria, but a battle for all who oppose unipolar global hegemony to fight. Maybe not with bullets, bombs, and missiles, but a fight nonetheless," Cartalucci concluded.