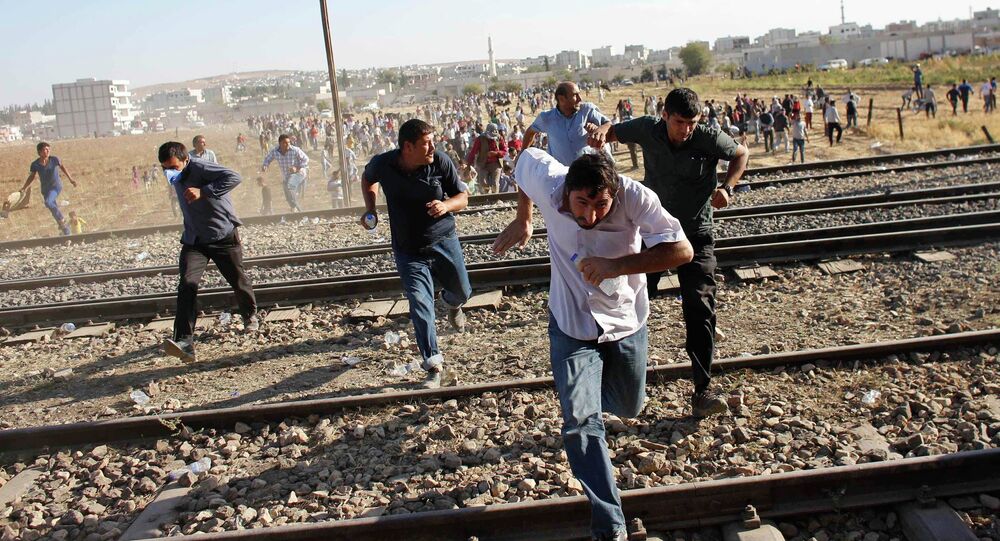 Turkish Ambassador to Russia said that Ankara is concerned over some countries’ possible cooperation with Kurds in the fight against the Islamic State and will take measures against such cooperation.

© REUTERS / Murad Sezer
Turkey’s Fight Against ISIL is Myth as Erdogan Continues War Against Kurds
MOSCOW (Sputnik) – Ankara is concerned over some countries’ possible cooperation with Kurds in the fight against the Islamic State and will take measures against such cooperation, Turkish Ambassador to Russia Umit Yardim said Thursday.

“We are concerned over this and this will remain a subject of our concern. We are discussing this issue not only with Russia, but with other countries friendly to us,” Yardim said.

He said that Ankara has “made it perfectly clear” that if support is given to the Kurds by other countries, including by the United States, then Turkey “would react immediately.”

The Islamic State extremist group has captured large areas in Syria and Iraq. Its advance is being countered by the airstrikes of a US-led coalition, as well as a Russian air campaign. Kurdish forces, as well as Syrian and Iraqi troops, are fighting IS on the ground.

On Wednesday, Turkish Prime Minister Ahmet Davutoglu said that Ankara had warned Moscow and Washington of the inadmissibility of providing military aid to Syrian Kurds. According to Davutoglu, there is no guarantee that weapons supplied to the Syrian Kurds would not end up in the hands of the Kurdistan Workers' Party (PKK).

A Turkish Foreign Ministry spokesperson told RIA Novsoti earlier that the US and Russian ambassadors were summoned to the ministry on the issue.

Later Wednesday, Russian Foreign Minister Sergei Lavrov said that Moscow was providing military and technical assistance to Iraqi Kurds with the consent of Baghdad and exclusively through the Iraqi government.

EU Calls for Turkey to Return to Peace Process With Kurds