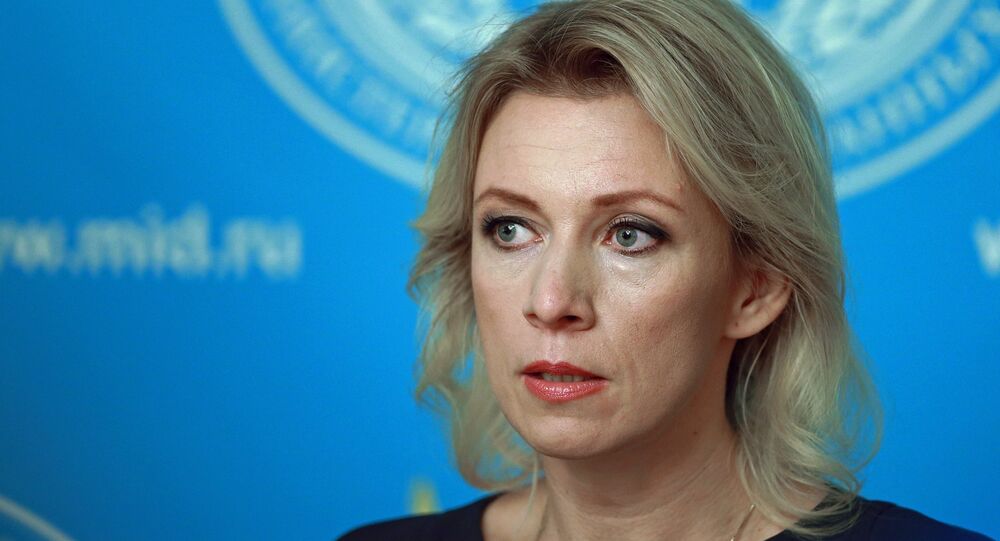 On Tuesday, the Russian Foreign Ministry held an extraordinary briefing to discuss the international coverage of Russia's military operation in Syria.

Speaking during a briefing in Moscow, Zakharova noted that Western claims that Russia kills civilians in Syria and attacks the moderate opposition were based on unconfirmed data and unnamed sources.

She went on to say that Moscow was surprised at British official statements alleging that Russia is waging an asymmetric war in Syria and committing a mistake.

"If it is a mistake, show us the facts proving that," she said. "This is how public opinion is shaped. The people who watch television believe these people and they believe it is a mistake," she added.

"British Secretary of State for Foreign [and Commonwealth] Affairs Philip Hammond considers Russia's participation in the Syrian conflict to be ‘a small example of classical Russian asymmetric method of conducting war.' We are talking about serious policy, of serious things, we've been talking for years about the fight with an actual global evil.

How can you say this using such phrases when we're talking about official statements from an official representative, the leader of a country," Zakharova said.

She called world leaders to be responsible for their words and to "solidify their words with concrete material."

"Blaming the Russian Air Force for the death of civilians, and even more sinisterly, the death of children, is pure propaganda. If you show a kid who’s bringing bread to his family hiding from Russian bombings, then show a kid whose parents have been beheaded by IS [militants], against whom our guys, our servicemen are fighting in the region,” Zakharova said.

The Foreign Ministry spokeswoman said Moscow was ready to respond to Washington's concerns regarding Russian airstrikes in Syria at any time:

"I wish to remind you that we have finally restored communication channels between our two countries' defense ministries and defense agencies… If any concerns remain after phone talks that may be held at any time by US request, then you may make comments, but first ask us."

While discussing the claims that Russian airstrikes target moderate Syrian opposition in the Homs province, Zakharova referred to earlier reports of persecution of Christians in the area by Islamist fighters. "Who was persecuting them then?" she asked.

Referring to the western airstrikes against ISIL, Zakharova said they were inefficient because of the lack of coordination with Syria's army. "You can't fight ISIL from the air. You can only fight ISIL by joint efforts with the Syrian army on the ground," she said.

Answering journalists' questions, Zakharova reiterated that Russia was not planning any ground operations in Syria, adding that all western speculations on this topic were baseless.