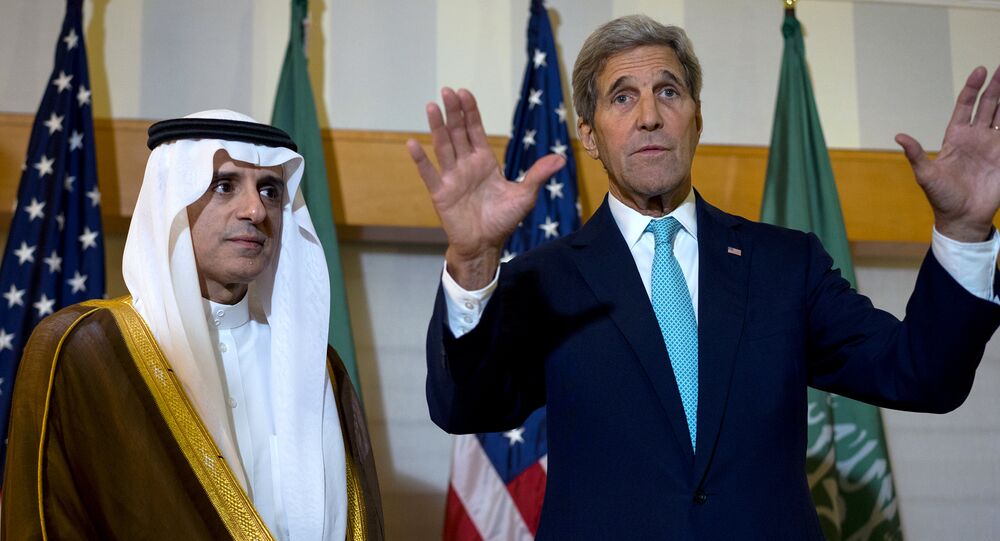 The Saudi ambassador to the UN has risked being accused of hypocrisy over his assessment of the crisis in Syria, demanding that Russia halt its airstrikes in the country amid accusations that a "number of innocent victims have been killed."

Speaking at UN headquarters in New York, Abdallah al-Mouallimi called on Moscow to stop its bombing campaign of anti-government targets in Syria, claiming that innocent victims were being targeted.

"The delegation of my country expresses its profound concern regarding the military operations which Russian forces have carried out in Homs and Hama — places where ISIS [ISIL] forces are not present.

"These attacks led to a number of innocent victims. We demand it stop immediately and not recur."

The criticism comes as Russian officials confirmed that a number of "well known" militant groups, including ISIL, would be targeted as part of its bombing campaign in Syria, carried out upon the request of Syrian President Bashar al-Assad.

"These organizations are well-known and the targets are chosen in coordination with the armed forces of Syria."

Moscow also denied accusations that it was responsible for the deaths of 33 civilians in an airstrike in the town of Rastan, with Russian President Vladimir Putin saying that reports of Russian-caused civilian casualties had surfaced "even before our planes got in the air."

Civilian Cost of US-Led Coalition in Syria and Iraq

As the war of words continues, the Saudi accusations that Russia should stop its bombing campaign due to civilian casualties raises questions of double standards.

Saudi Arabia — through its cooperation in the US-led coalition against ISIL — has been taking part in airstrikes against strategic ISIL targets in Syria since September 2014, while also working with various "moderate" Islamist groups opposed to Assad's government.

Officially, the US-led coalition has taken responsibility for only two civilian deaths as a result of the airstrikes, with the bombing campaign described as the "the most precise and disciplined in the history of aerial warfare" by US Lt Gen John Hesterman.

However, many questions remain over the precision of such figures, with the Airwars project — a campaign undertaken by a team of independent journalists — claiming that there was credible evidence linking the US-led strikes to 591 civilian deaths in Syria and Iraq over the past 12 and a half months.

Meanwhile, Russia has maintained that it has consistently followed international law over the Syrian crisis, only taking part in airstrikes, following an official request from the Syrian government.

On top of reports of the heavy civilian impact of the US-led anti-ISIL coalition in Iraq and Syria, there has been international condemnation of Saudi Arabia's actions in Yemen.

Instead of focusing on diplomatic measures, Saudi Arabia announced in March that it would lead a coalition of nations in a bombing campaign aimed at defeating the Houthi rebels in Yemen and returning exiled Prime Minister Abd Rabbuh Mansur Hadi to power.

The campaign has been criticized for its devastating impacts on the civilians of Yemen, with the country experiencing a disastrous humanitarian crisis, following the Saudi decision to carry out airstrikes.

Just as Saudi Arabia demanded Russia halt its airstrikes in Syria, the UN called on Riyadh to stop its own campaign in Yemen, revealing that an estimated 2,300 civilians had been killed and a further 4,800 wounded in the country since March.

A recent report released by the UN high commissioner's office found that close to two-thirds of reported civilian deaths "had allegedly been caused by [Saudi-led] coalition airstrikes, which were also responsible for almost two-thirds of damaged or destroyed civilian public buildings."

Instead of strictly targeting opposition militia bases, Rupert Colville, spokesman for the United Nations High Commissioner for Human Rights, said that civilians were being killed by "an increasing number of airstrikes targeting bridges and highways."

Adding to the effects that airstrikes are having on Yemeni citizens, there is also great concern over the Saudi blockade of Yemen's main ports.

While Saudi officials claim the blockade is in place to prevent weapons and military supplies from being smuggled into the hands of Houthi rebels, aid agencies have said that it is worsening the living situation, with four out of five Yemenis requiring humanitarian assistance and 1.5 million displaced internally.