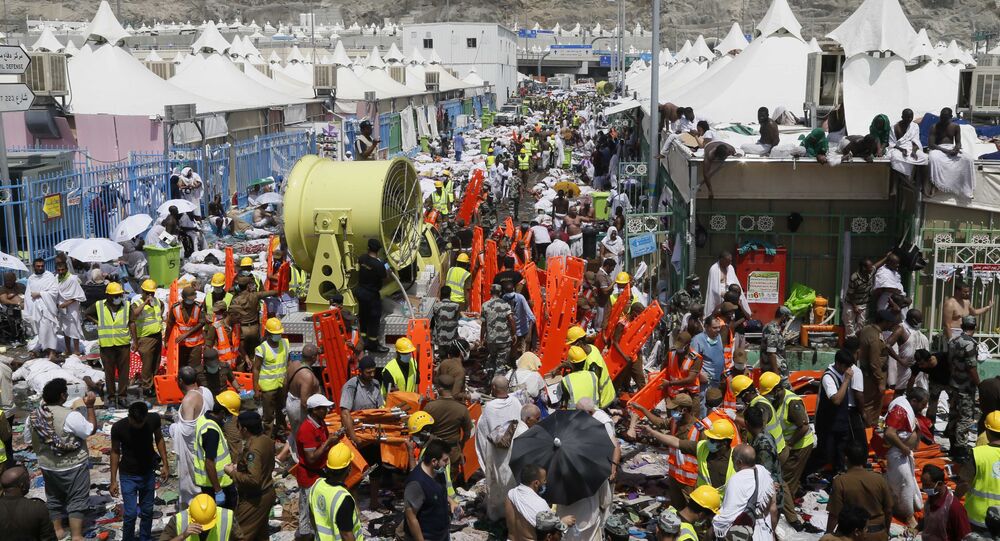 As Iranian leaders call for a fact-finding mission investigating the September 24 Hajj stampede, many hardliners in the Islamic Republic have already jumped to some bizarre conclusions about the cause of the tragic incident.

© AP Photo / Mosa'ab Elshamy
Saudi Royals Sink Billions Into Killing Innocent Yemenis, While Ordinary Hajj Pilgrims Left to Die
At least 769 pilgrims were killed on September 24 after a deadly stampede in Mina city, which lies roughly 2 miles from the Holy site of Mecca, according to Saudi authorities. Iran, however, claims that the death toll is higher, and has demanded an apology from Saudi leaders for what it believes to be negligence on their part.

The Islamic Republic’s Hajj and Pilgrimage Organization puts the number of Iranian deaths resulting from the incident at 464, with hundreds more Iranian pilgrims unaccounted for. This means more Iranians were killed by the stampede than any other nationality.

That, and the fact that the incident occurred on the territory of Iran’s main regional nemesis, Saudi Arabia, which also happens to be allied with the Islamic Republic’s even greater nemesis, the United States, basically begs for a conspiracy theory or two.

Indeed, just one week after the tragedy, there’s enough conspiracy theories to go around.

Mohammed Reza Naghdi, the commander of Iran’s paramilitary Basix forces, was quick to point to the US as the main culprit in the incident.

Naghdi, who has been known to blame the US for many international issues, told Iranian media on September 29 that the tragedy was Washington’s way of undermining the Hajj pilgrimage, which is one of the five pillars of Islam.

"The Americans are behind the Mina disaster," he said. "From their propaganda, we can understand that they’re aiming at turning away people from the principle of Hajj."

General Massud Jazayeri, the deputy chief of staff of Iranian Armed Forces, took the theory a step further by implicating all of Iran’s usual foes. Referring to the stampede, and the crane collapse incident on September 11 that also killed 108 people in Mecca, Jazayeri indicated that both incidents were deliberate.

"Given the oppressor Zionist regime’s infiltration and influence on the al-Saud [ruling family], there is a growing possibility that the two incidents – the crane-crash incident at the Grand Mosque [in Mecca] and the death of thousands of people in Mina – were deliberate," he told the semi-official Fars news agency on September 28.

He also called for leaders of Muslim countries to establish an investigative committee to "decode these crimes by al-Saud."

One theory that has escalated the blame-game between Saudi Arabia and Iran revolves around Ghazanfar Roknadabi, the Islamic Republic’s former envoy to Beirut.

Roknadabi was in Beirut in the summer of 2013, when the Iranian embassy was targeted by a suicide bombing carried out by an al-Qaeda affiliate. He was also among the pilgrims in Mina at the time of the stampede.

Roknadabi has since been pronounced dead, but prior to the announcement, when he was still unaccounted for, several Iranian websites and officials indicated that he may have been kidnapped by Saudi authorities.

Fars news agency quoted spokesman for the Culture Ministry, Hossein Noushabadi, as saying that a Saudi plot to kidnap Roknadabi was "a serious possibility."

The Saudi-funded Al Arabiya news channel, in turn, claims that Riyadh officials have no record of Roknadabi entering the country as a pilgrim, indicating that he did so under a fake name. The claims were denied by Iran’s Foreign Ministry, which reported that he entered the Kingdom using his regular passport.

Other Iranian officials, however, have distanced themselves from the conspiracy theories, with some completely dismissing them.

Secretary of Iran’s Supreme National Security Council, Ali Shamkhani, said claims of Roknadabi’s kidnapping were simply "unreal." He noted that though the tragic stampede was not deliberate, it was likely the result of "incompetence and inefficiency" on the part of the Saudi government.