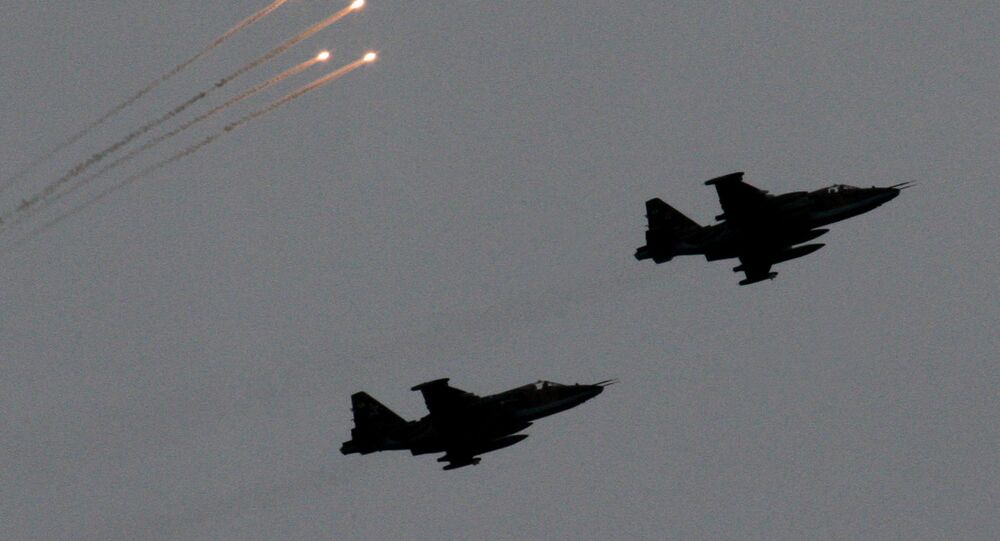 “A headquarters of terrorist groups and an arms depot were destroyed in the region of Ildib, as well as a militant three-level fortified command point in the region of Hama [in west-central Syria],” the press service said.

Russian aircraft carried out airstrikes on four Islamic State targets in Syria overnight. During the airstrikes factory where terrorists loaded cars with explosives was destroyed.

"During the night, Russian aviation bombed four Islamic State targets on Syrian territory. Eight sorties on Su-24M and Su-25 were conducted," the press service said in a statement.

More than 50 Russian Air Force airplanes and helicopters are involved in airstrikes against Islamic State positions in Syria, the press service of the Russian Defense Ministry said.

“The aviation group was deployed very quickly. We were able to do this since the main supplies of material and arms were stored in the material-technical support point in Tartus [Syria]. All that was left to do was to deploy aviation and bring some equipment in,” the press service said.

Russia is only carrying out airstrikes outside of populated areas in Syria, and bases its moves on confirmed intelligence data.

"To avoid civilian damage, Russian airstrikes are set to hit sites located strictly outside of settlements, based on confirmed intelligence data from various sources," the press service said.

All airstrikes being conducted by the Russian Air Force are being agreed with the leaders of the Syrian Army, which has set up a Syrian Defense operative group at the Hmaimim Airbase, the press service of the Russian Defense Ministry said.

“All airstrikes by Russian aviation are agreed with the leaders of the Syrian Army, which has established a Syrian Defense Ministry operative group at the Hmaimim Airbase,” the press service said.

According to Konashenkov, over the first 24 hours, the Russian Air Force has carried out targeted airstrikes against 12 Islamic State positions both day and night.

Russia actively uses space reconnaissance and drones in Syria to gain information on the whereabouts of Islamic State fighters.

"In order to obtain reliable information about the location of terrorists and the results of airstrikes, means of space reconnaissance and unmanned aerial vehicles are being actively used," the ministry's press service said in a statement.

Free Elections in Syria Possible Within Year After Defeat of ISIL