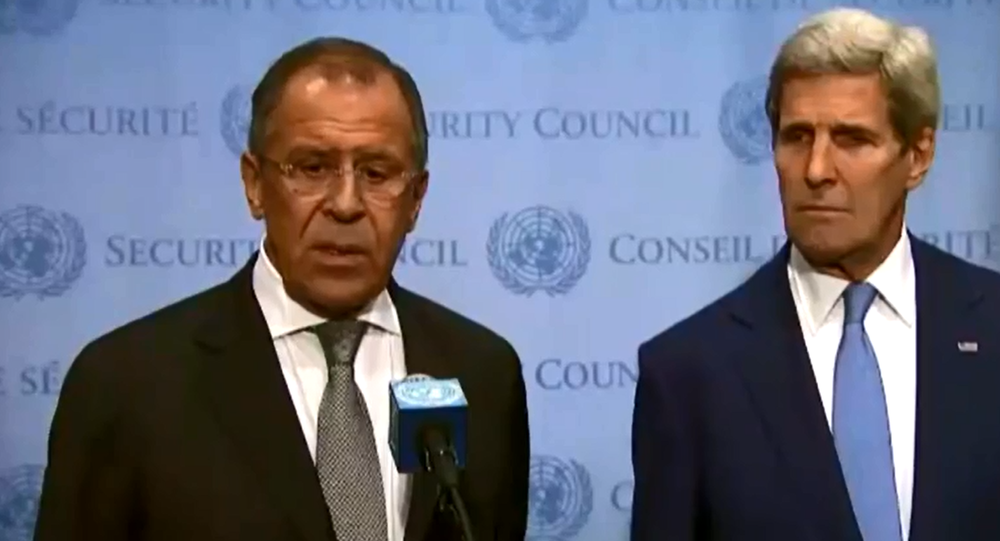 Russian Foreign Minister Sergei Lavrov stressed that a democratic and united Syria is the ultimate goal, following a discussion with US counterpart John Kerry at the UN on Wednesday evening.

"We all want Syria democratic, united, secular; Syria which is a home for all ethnic and confessional groups, whose rights are guaranteed," Lavrov said. "But we have some differences as for the details on how to get there."

Lavrov also said that he and Kerry discussed the importance of coordination between the US and Russian military to avoid unintended incidents in Syrian airspace.

Kerry described the meeting as "constructive," and stated Washington's concern about the targets of the Russian airstrikes.

"We agreed on the imperative…of having a military-to-military deconfliction meeting," Kerry said.

"We also agreed that it is imperative to find a solution to this conflict and to avoid escalating it in any way or seeing it intensified by forces beyond anybody's control," he added.

"As a result of airstrikes, ammunition and fuel depots, heavy military hardware, as well as command posts in the mountainous areas have been destroyed," Russian Defense Ministry spokesman Maj. Gen. Igor Konashenkov said in a statement.

While US officials have expressed concern that Russian airstrikes are not targeting the Islamic State, Lavrov dismissed those claims.

"Our air force works in Syria in coordination with the Syrian army and exclusively on targets connected to IS," he stressed. "There were rumors that some civilians were injured as a result of the strikes, we have no such information. We are monitoring the situation very closely in order to ensure the precision of the strikes."

"I think that life has proved that it is not realistic to demand in ultimatum the departure of a president in a situation when there is such a crisis in the country [Syria]," he said. "It is necessary to negotiate."