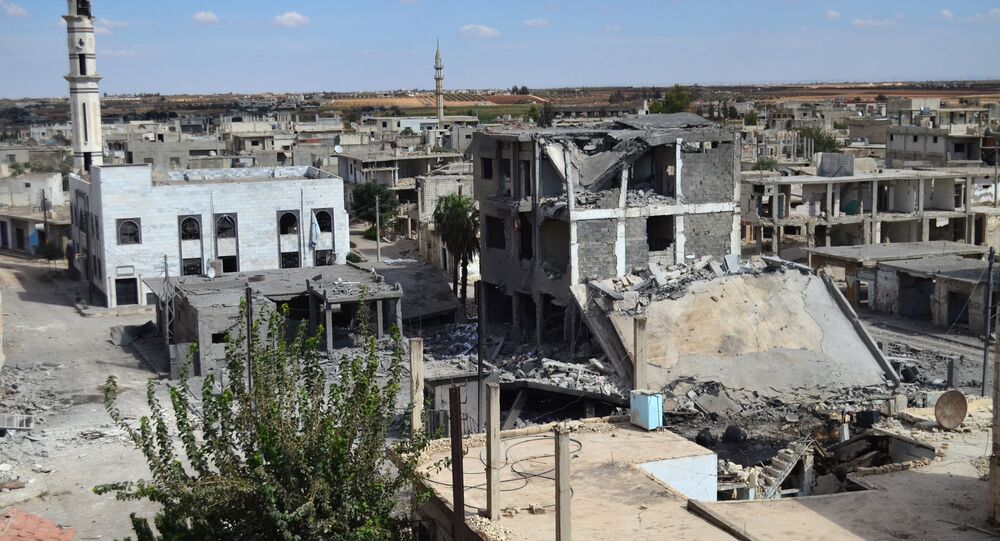 'Russia Needs Security in the Whole of the Middle East, Not Just in Syria'

President Putin’s move to set up a center in Baghdad where Russia, Iraq, Iran and Syria can co-ordinate counter-terrorism is an attempt to demonstrate to the world that Russia is dedicated to promoting the stability of the region rather than just eliminating threats within one country, a Syrian parliamentarian told Sputnik Arabic service.

© Sputnik / Pavel Gerasimov
Defense Ministry Confirms Russia Began Airstrikes Against ISIL in Syria
“[Everyone] who followed the speech of Vladimir Putin at the UN General Assembly attentively has heard that the Russian president insists on the creation of a new, real, anti-terrorist coalition in the region,” Khaled al-Abboud, Secretary of the Syrian Parliament, told Sputnik Arabic.

“This open coalition, which encourages any participation of all states, will operate transparently, unlike the closed Western coalition, created by Barack Obama so that a number of countries could 'serve' for the benefit of America.”

The parliamentarian noted that the Russian leader has stressed that the Syrian armed forces are the only power who are fighting terrorism.

These words assured the Syrian authorities that Russia will cooperate with them and will render the Syrian army all the necessary assistance.

Commenting on the recent launch of Russian airstrikes against ISIL in Syria, the politician called it a new stage of the events there, which nobody has expected.

© Sputnik / Alexei Druzhinin
Putin Says Russian Engagement in Syria 'Temporary'
Bashar Assad has appealed to Russia for military assistance in his fight against terrorism. The request should be interpreted only as such. Aid in the form of military equipment differs from that of a presence of armed forces on the ground. Thus, the politician said, one should not confuse the meaning of the appeal.

Russia has been rendering military aid to Syria for a long while, even throughout the last several years. Bashar Assad is the chief commander of the Syrian armed forces and has the full right to appeal to other countries for military aid to his army. According to the Syrian constitution, he does not need an approval of the parliament for such a request, he says.

© Sputnik / Ramil Sitdikov
Russian Anti-ISIL Airstrikes in Syria to Boost Iraq's Chances of Success
“The Syrian crisis is coming to an end. I see the current state as the 'beginning of the end' of what is going on in our country. Yes, it is a tough period, which implies bloodshed from any side, even though we don’t want it. But war is war.”

“It is the end; It is the result of the Russian presence and Russia’s assistance to the Syrian army. [There] is nothing left for the US but join our coalition. Russia’s military and political pressure will lead our union (Russia-Syria-Iran) to its success against terrorism.”

“I’d like to note that President Putin’s move to set up a coordination center for  Russia, Iraq, Iran and Syria in Baghdad, not in Syria, is an attempt to demonstrate to the world that Russia is set not only for Syria but for the whole region, it needs security in the whole of the Middle East, not in one separate country.”