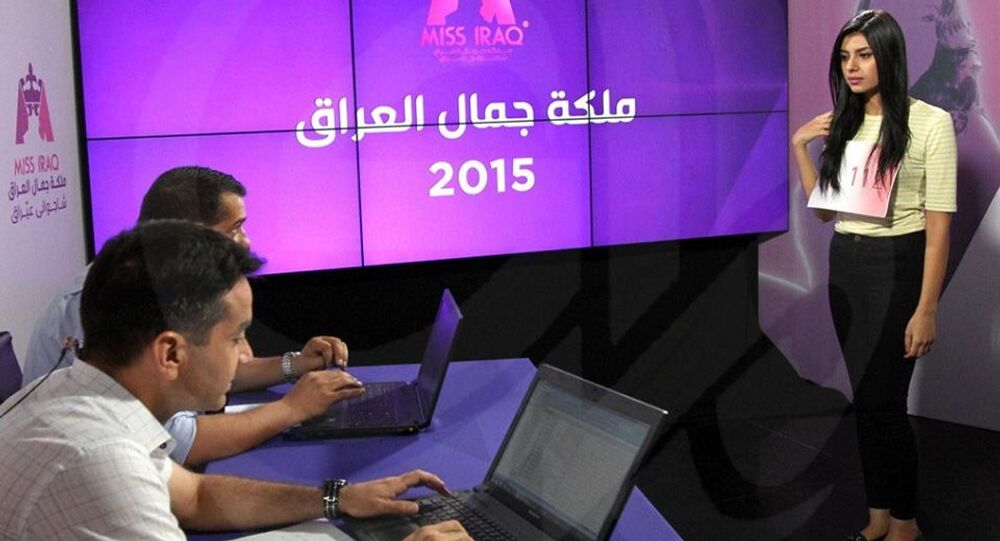 Organizers of the first internationally recognized Miss Iraq Beauty Pageant in decades are facing severe criticism and threats from religious hardliners, some of whom have issued death threats against contestants.

© AP Photo / Muhammed Muheisen
Japan to Allocate $810Mln to Help Refugees from Syria, Iraq
The Miss Iraq pageant will be the first of its kind in nearly forty years, and aims to revitalize Iraq’s culture, which continues to struggle in a country torn apart by almost 12 years of brutal and violent conflict, according to organizers.

Initially scheduled for October, the contest’s finale was postponed to December after tribal leaders opposed to the public display of women’s bodies issued threats against the event. At least two women have pulled out of the contest as a result of the threats, but organizers and most participants say they are determined to push forward with the event.

"There are many indicators that Iraq is finished, but such contests give hope that life in Iraq goes on," Senan Kamel, spokesman for the pageant, told the Guardian.

To appease many of the country’s conservatives, who view the contest as a departure from Iraqi norms and practices, organizers have attempted to dial down some of the pageant’s aspects. One such change involves dropping the swimsuit portion of the contest.

"We deliberately organized the competition according to standards appropriate to Iraqi society to prove to the world that Iraq is a civilized country with a civic soul and a spirit of life," Kamel added.

That message has been lost on some of Iraq’s conservative leaders, who say the pageant threatens to corrupt public morals and traditions. A pro-Shiite Iraqi channel has accused organizers of being Freemasons, saying that the event would "create a base culture while our people face the danger of terrorism."

For many participants, however, the threats have only increased the determination to push ahead and compete in the pageant.

"God willing, I will try to ignore [the criticism] because it is an honor to represent my country," Lubna Hameed, a 21-year-old college student from Baghdad, told the Guardian.

Contest judges will select ten finalists from a pool of 50 applicants, with the plan to send representatives to pageants in Thailand and Egypt. Organizers hope that the pageant’s winner will qualify for prestigious international pageants, such as the one in 1972 that marked the first and last time an Iraqi woman, Wijdan Burhan al-Deen, represented the country in the Miss Universe contest.

The selected finalists will receive the customary etiquette and public speaking training of similar beauty pageants, and will additionally volunteer to help some of the 3 million Iraqis that have been displaced in the fighting between the army and the self-proclaimed Islamic State.

"We are searching for a personality to represent Iraq, a woman to be a real ambassador," Kamel said.