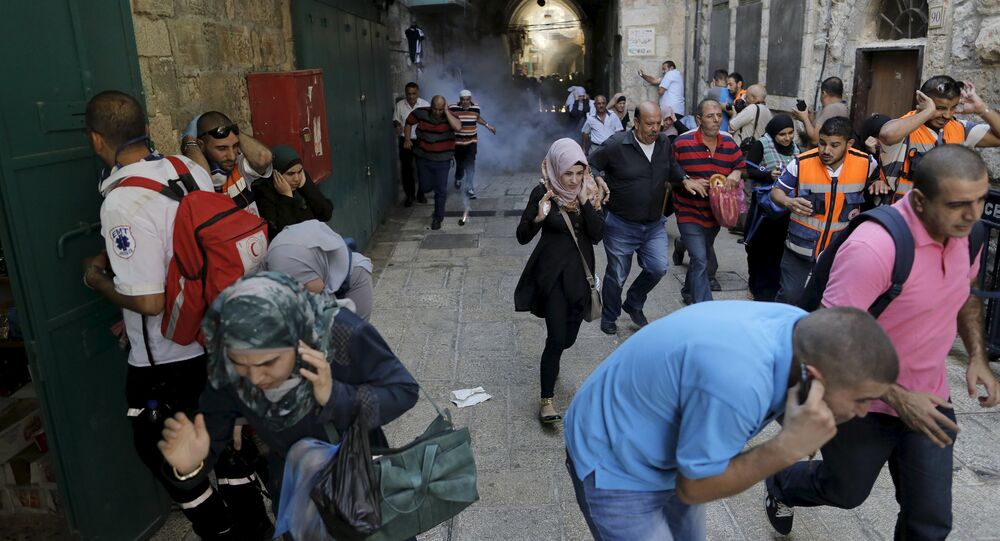 © Flickr / SarahTz
Palestinians Protect Israeli Policewoman from Rock Throwers
TEL AVIV (Sputnik) – Clashes between Palestinians and local authorities broke out on Sunday, when the Palestinians protested against non-Muslims being allowed to East Jerusalem’s Temple Mount. Both Muslims and Jews frequent this complex during their respective religious holidays as holy sites of both faiths are located there. The celebration of the Muslim holiday of Eid al-Adha and the Jewish festival of Succot have partially coincided this year.

"They [Palestinians] intended to disrupt public order, to organize clashes with police and to disrupt the scheduled excursions," Zingerman told RIA Novosti, adding that youths, who had displayed aggression by throwing stones and Molotov cocktails at police, had been blocked within the Al-Aqsa Mosque.

In mid-September, violence erupted between the Israeli authorities and Palestinians after police officers stormed the Al-Aqsa Mosque compound to detain people suspected of throwing stones at officers, while protesting against the Israeli presence on Palestinian soil.

Palestinians seek the recognition of their independent state on territories of the West Bank, including East Jerusalem, partially occupied by Israel, as well as in the Gaza Strip.

Palestinians have designated Jerusalem as their capital and have called on Israel to return territories seized in the 1967 Six-Day War.