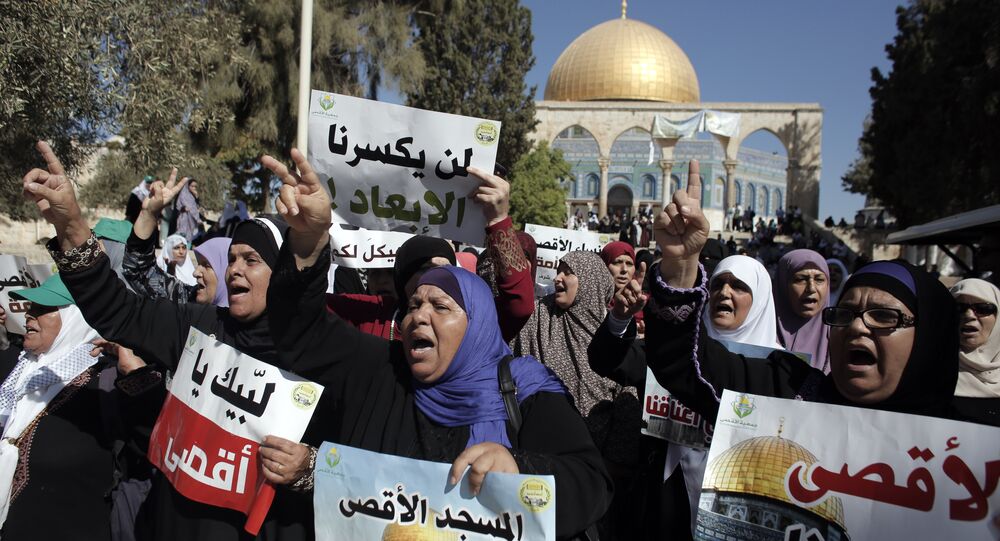 Monday saw new clashes between Israeli police and Palestinians at the Al-Aqsa mosque compound in East Jerusalem, according to news reports.

The third holiest site in Islam, Al-Aqsa is also revered by Jews as it is located on the Temple Mount, which is considered the most sacred place in Judaism.

According to the mosque's rules, Jews and people of other religions are allowed to visit Al-Aqsa between 7:30 a.m. and 11:30 a.m. local time, but they should not pray there so as to avoid provoking tensions.

However, Palestinians claimed that far-right Jews had breached the 50-year-old agreement by entering the mosque and praying there on Sunday.

Later that day, police were deployed to the compound where young masked Palestinians "threw stones and fireworks at police and border police forces", who responded with "riot dispersal means", according to media reports.

© AP Photo / Bernat Armangue
Israel Complains to UN About Palestinians' Bid to Fly Their Flag
There was no immediate word on injuries or arrests following Sunday's brief exchange, which came hours before the beginning of the Jewish festival of Sukkot.

Right now, the situation reportedly remains tense in the area, with right-wing Jewish groups preparing to enter the mosque compound where Palestinian worshippers had barricaded themselves in.

According to some media reports, several Israeli soldiers were seen coming into position on the roof of the Al-Aqsa mosque.