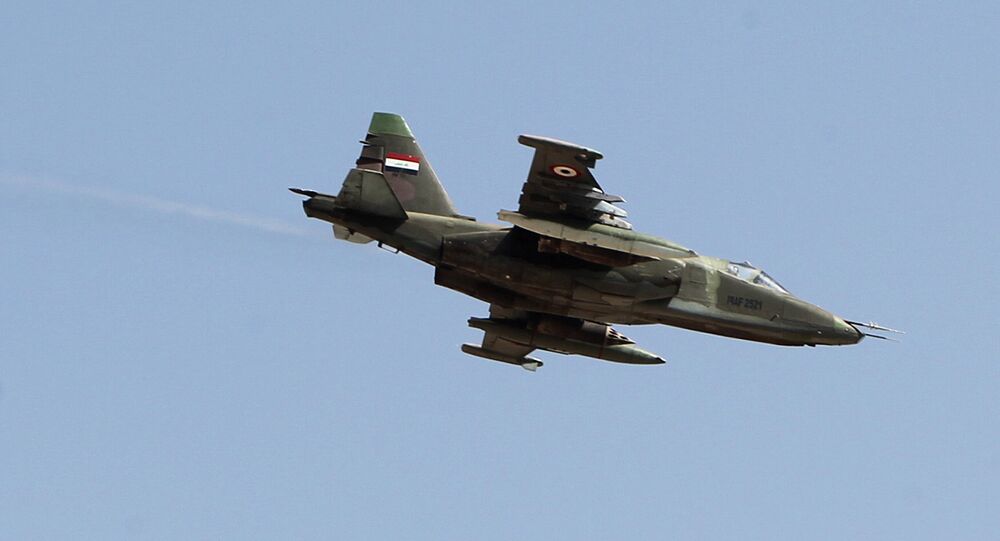 The Iraqi government, backed by the United Stated for years, is now taking another independent geopolitical step towards its neighbors, Iran and Syria, as well as Russia – it's going to share intelligence without Washington's approval.

First, Iraq recently angered the State Department by allowing Russian planes to bring supplies and equipment to Syria over its airspace. On Friday, Ibrahim al-Jafari, Iraq’s foreign minister, at the Council on Foreign Relations told journalists when asked about the Russian flights that his country “did not violate any of our commitments toward the international community.”

al-Jaafari: it is true that Iraq needs equipment, intelligence, air support, but we do not need foreign bases from any countries. #CFRLive

© Sputnik / Andrey Stenin
Under Pressure: US Bullies Iraq to Close Airspace to Russian Aid Flights to Syria
Just two days later, the Iraqi army announced it has started the regular exchange of intelligence concerning ISIL terrorists with Russia, Syria and Iran, that would “participate in collecting information about ISIS terrorism.” The arrangement is significant for country's security, it reads, as Iraq is concerned that thousands of volunteers joining the Islamic State have come from Russia, The New York Times reports.

The agreement was reached without ever asking Washington and announced this Sunday, The Times writes. This yet again irritated the US, which has got used to thinking of Iraq as a country with a government under its control and a vital member of the US-led coalition against ISIL.

“We do not support the presence of Syrian government officials who are part of a regime that has brutalized its own citizens,” a spokesperson for the anti-ISIL coalition, based in Baghdad, US Col. Steven H. Warren, said.

US Secretary of State John Kerry briefly commented at a meeting with Russia’s Foreign Minister Sergei Lavrov on Sunday, held on the sidelines of the United Nations General Assembly, that the issue is currently being coordinated with Russia. And a senior DoS official at a press briefing described the stance of Washington in a little bit greater detail.

“[W]e’re just at the beginning of trying to understand what the Russians’ intentions are in Syria, in Iraq, and to try to see if there are mutually beneficial ways forward here. We’ve got a long way to go in that conversation,” the official explained.

© AP Photo /
Russian Arms Are Best in War Against ISIL – Iraqi Defense Minister
Russian President Vladimir Putin and US President Barack Obama are scheduled to meet on Monday, September 28, in New York and to address different issues. But first and foremost is the coordination of efforts in the Middle East.

The US has been officially providing military assistance to Iraqi armed forces for billions of dollars; there are some 3,500 American military personnel of various ranks and specializations deployed around the country.

The urgent delivery was provided after the United States delayed its shipment of F-16 fighter jets, which the Iraqi Air Force had planned to use in the fight against Islamic militants.

#Iraq; Iraqi air crews reloading a Su-25 jet before it takes off and unloads on Da'ish militants in the Baiji area. pic.twitter.com/JLqabFtS7Q

“The delivery of these jets [Su-25] was conducted in the framework of international support of Iraq in its fight against terrorism. Fast and timely delivery of aircraft by Russian military aviation experts was due to connections between Russian and Iraqi government,” the ministry said in a statement on February 1, 2015.

Russian Foreign Minister Sergei Lavrov at a meeting with his Iraqi counterpart last spring stressed that Russia is committed “to continue to provide assistance to Baghdad in order to strengthen its defense in the face of this threat, ensuring the unity, territorial integrity of the state and non-interference from outside in its internal affairs.”

Lavrov then pointed out that Russia considers its direct military-technical assistance to Iraq to be a “real contribution to the success of the fight against terrorism.”

Iraq is currently combating the Islamic State of Iraq and Levant (ISIL) jihadist group, which gained a foothold in the country in summer 2014. The group, which has also been operating in Syria since 2012, has captured vast areas in both countries and proclaimed a caliphate in the territories under its control.