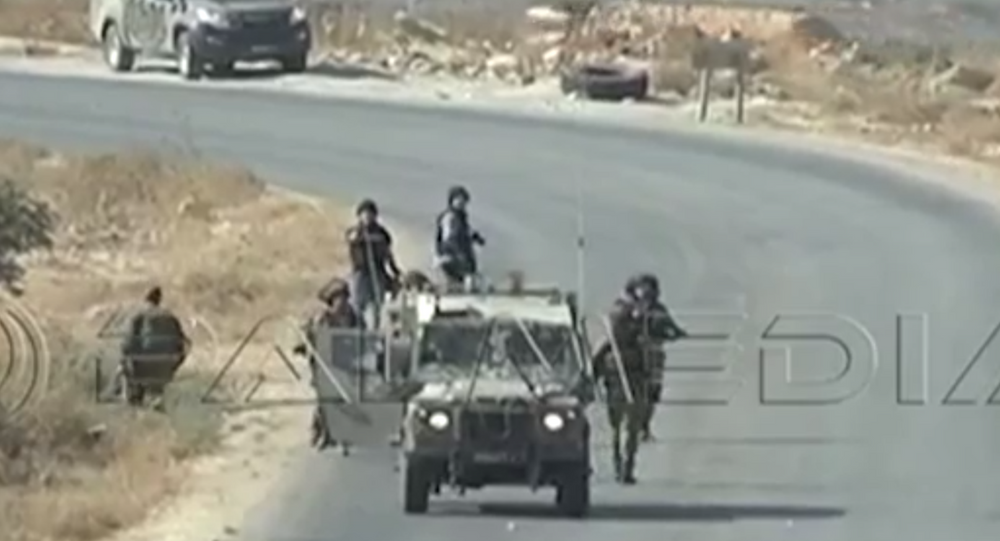 While covering a demonstration in the West Bank, two journalists with Agence France-Presse were attacked by Israeli soldiers, who then proceeded to destroy their equipment.

Andrea Bernardi and Abbas Momani were near the village of Beit Furik on Friday. On assignment for AFP, the two journalists were reporting on a protest that followed the funeral of a Palestinian man shot by Israeli security forces.

In covering the events, Bernardi and Momani were themselves attacked by Israeli soldiers.

"They had passed the first checkpoint of the border police with their press cards without problem," AFP bureau chief Thomas Cox told the Guardian. "Andrea paused to check his camera setting and as he was doing so a soldier immediately arrived and told him to stop filming and pushed his camera."

Pal Media (Screenshot)
A soldier, at right, tosses a camera to the ground.

"He then took the camera and smashed it."

Video of the incident shows the journalists walking away, only to be chased down by another soldier who destroys more of the pair’s equipment.

According to Cox, Bernardi later went back to recover his camera, and things escalated from there.

"At this point a soldier jumped on him and put a pistol on his face and attacked him."

"It was crazy," Bernardi told the Guardian. "When we arrived at the border police checkpoint we showed our documents. There was no problem. They were being nice."

"We passed the first line of soldiers loading teargas. I heard screaming and a soldier started pushing and shouting 'what the f*ck are you doing' in English. I then [realized] he was loading this gun and I thought ‘what the…’ and we started walking back."

Bernardi notes that if either he or Momani had been guilty of some crime that they would have been arrested, but that never happened.

"After we got back to the car I saw a piece of the camera and wanted to take a picture of it because I was worried they would accuse me of doing something wrong," he said. "That’s when a soldier pointed a pistol in my face and pulled me down."

Pal Media (Screenshot)
A military vehicle chases down Bernardi, who, knelt at right, attempts to pick up his camera.

AFP has announced its intention to file a formal complaint.

A spokesman for the Israeli army told the Guardian that a preliminary investigation had already been conducted. It found that the soldiers acted in breach of the military’s code of conduct in interfering with the work of journalists.

The spokesman said that the soldiers involved would be subject to disciplinary action.