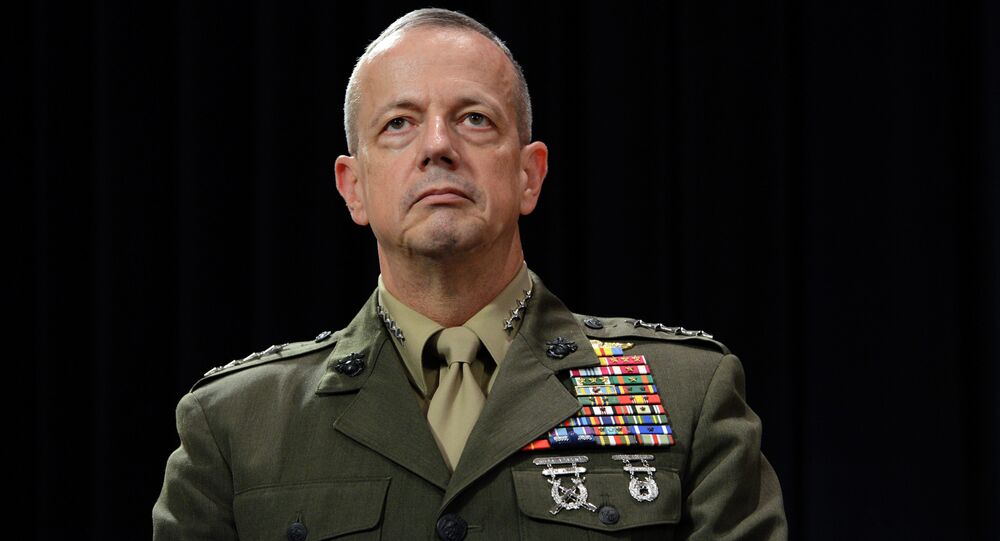 US General Boasts of Coalition's 'Remarkable Progress' in War Against ISIL

A senior Obama administration official charged with coordinating the international effort against ISIL took a moment Sunday to boast about the US-led coalition's efforts in the war against the terror group, noting that "remarkable progress" has been made over the past year, and adding that the US will continue to work to topple Syria's government.

© AP Photo / Gerald Herbert
'Degrade & Destroy': One Year On, Obama's Promise to Eradicate ISIL Costs Billions, Kills Thousands, Gets Nowhere
General John Allen, President Obama's Special Envoy for the Global Coalition to Counter ISIL, went on ABC's 'This Week' on Sunday to brag about the anti-ISIL coalition's many successes. With the Washington-led air campaign against the Islamic State marking its one year anniversary recently, Allen recalled that "where we were a year ago today, I wasn't sure how it was going to unfold." A year on, acknowledging that work remains to be done, the general emphasized that the US and its allies have had some "real successes" and have made "remarkable progress" in the war against the terror group.

"In the intervening months, we've seen remarkable progress in many respects. We've seen the emergence of a capable leader and a partner in Baghdad in the form of [Iraqi Prime Minister] Haider al-Abadi…We've seen a coalition come into existence in the intervening months between those days and today, a coalition that has worked very hard to stem the flow of foreign fighters," Allen noted. The official added that much has also been done to impede ISIL's finances and its recruitment capability, and in countering the group's ideology and its propaganda efforts.

The general went on to list off the military reversals faced by the terror group, from the Iraqi Security Forces successes in regaining Tikrit, to Kurdish forces' successes in Kobani, with the help of coalition air forces, to the blocking off of ISIL access points into Syria from Turkey.

Allen emphasized that coalition airstrikes have allowed US allies on the ground to accomplish "significant progress in the battlespace in Syria," in addition to "providing significant support to the Iraqi forces in the field."

© AP Photo
Islamic State Winning in Eyes of Recruits After Year of Airstrikes
The US-led coalition has been conducting a sustained campaign of airstrikes on ISIL positions in Iraq and Syria since September 2014. Since then, the 12-nation coalition has carried out more than 6,700 airstrikes, as well as over 53,000 aerial support missions. The Pentagon has estimated that over 10,000 ISIL targets, from buildings and oil infrastructure to tanks and fighting positions have been damaged or destroyed, with 10,000 fighters said to have been killed.

The rosy and optimistic estimations of top officials, on the effectiveness of the US-led military operation, including those of General Allen, have been repeatedly challenged in past months by a number of experts and commentators. Critics cite everything from the cost of the operation (estimated at over $3.7 billion and counting) to the civilian casualties from the bombing campaign, to the fact that since the operation began, ISIL has only increased the frequency of its attacks, upped recruitment, and expanded its brutality toward the areas under its control.

© AP Photo / Uncredited
US Central Command Refuses to Probe Reports of 100s of Civilian Deaths in Syrian Airstrikes
On Friday, Steven Bucci, former top Pentagon official and the director of the Allison Center for Foreign Policy Studies at the Heritage Foundation, told Sputnik that "thus far, the Coalition Operation has failed to accomplish the purpose for which it was started, and has not even had sufficient progress to be called a work in progress." Noting that the terror group has been able to withstand US airstrikes for over a year now, Bucci suggested that "in the eyes of their supporters and possible recruits, ISIL is 'winning'" at this point "simply because they have not lost."

Hasan Abdullah, the Director of Intelligence & Research at the Islamabad-based SPEAR Institute, echoed Bucci's sentiment, telling Sputnik that "it's pretty clear that the West hasn't exactly been able to meet its objectives," and adding that US foreign policy, including its attempts to get rid of some 'dictators' while cozying up to others, has "weakened the democratic narrative…and has helped the Jihadists and Islamists in general."

In his ABC interview, General Allen appeared to demonstrate exactly the type of logic that Abdullah was talking about, suggesting a "political transition away from Bashar al-Assad" is necessary, and emphasizing that "he can't be part of a solution." The general noted that the US would have to continue that "conversation with our international partners and ultimately with the opposition elements in Syria to effect that transition."

Queried about how he sees such a 'political transition' occurring, Allen suggested that Assad and other elements of Syria's leadership should be removed "in the matter in which he has led this conflict," adding that it will be necessary to "empower" the opposition both "militarily and politically." The general also suggested that the US remains "wedded to the principle" that "moderate, reliable, vetted elements" of the Syrian opposition can even be used in the effort "to degrade and defeat Daesh."

© Photo : SANA
Lack of Russian-US 'Military-to-Military' Contact in Syria May Prove Lethal
Regarding Russia's role in the conflict, which US media have alleged is growing, General Allen noted that the US would welcome "constructive contributions" on Russia's part, but added that the US would "oppose any addition or support to the Assad regime that expands or accelerates the conflict."

For its part, Russia has repeatedly stressed that the anti-ISIL coalition must work with Assad if it genuinely wants to end the war. In an interview for Russian television on Sunday, Foreign Minister Sergei Lavrov stressed that if the coalition's goal "is to prevent the consolidation of the Iraqi and Syrian territories as the heartland of an ISIL-promoted caliphate, they should focus on helping those who are fighting these rebels on the ground –the Iraqi army, the Iraqi Kurds, the Syrian army and Syrian Kurdish militias." The minister stressed that the Syrian army can be one of the most effective forces in battling the terror group, adding that Washington's calculation about "withdrawing the Syrian army from the fight…is absurd."

© REUTERS / U.S. Air Force/Senior Airman Matthew Bruch/Handout
Good at Starting Wars, Bad at Winning Them: US Losing War Against ISIL
Commenting on the Syrian migrant crisis, General Allen said it was the responsibility of the "community of nations" to find "compassion" to help refugees, adding that the world has "a responsibility that we have shouldered to deal with the root causes of much of this humanitarian crisis, which is the crisis in the Middle East, whether it's the Syrian civil war or the emergence of this organization which we call ISIL or the Daesh."

The general was not probed by his interviewer and did not clarify whether the US invasion of Iraq, airstrikes against Libya, or US support for anti-Assad forces in Syria may have had something to do with the emergence of the crisis. Instead, he emphasized that Syria, including President Assad's response to the Arab Spring, "is one of the reasons that we have this humanitarian catastrophe in the region."

As far as the US is concerned, Allen suggested that the US should be careful about the refugees that they accept, noting that he was certain that US security officials are aware that ISIL could be trying to embed fighters in among the refugees, and saying that he has "tremendous confidence" in the FBI and other agencies charged with checking migrants.

"I think it's a threat. We need to understand the totality of it, I think, before we could brand it a national security threat. But it's clearly something we should be thinking about," the general noted.

Good at Starting Wars, Bad at Winning Them: US Losing War Against ISIL